CNN aired a piece on a “baby dropping ritual” in India in the Anderson Cooper segment last night, accompanied by Cooper’s wincing, and news reader Erica Hill’s raised voice exclaiming: “Look at that!“. The transcript on the CNN website is titled, in the mode of the gawker: “Villagers throw babies from temple roof“. 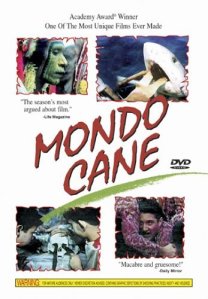 Given the lack of contextualizing, the almost complete absence of any explanation, and the continuous looping of the drop (which looked harmless to me), accompanied by shouts, squeals, and grimaces from the CNN “newsroom”, I realized that this scene was familiar to me, not so much the precise ritual itself, but the picture as a whole of a “bizarre” custom, the lack of ethnographic analysis, and the intent to shock, ending with a moralizing message that introduces “rationalism”. What the CNN piece looked like was something straight out of Mondo Cane, an Italian “skockumentary” in two volumes, from the 1960s, by two Italian fascist writers and directors (Gualtiero Jacopetti and Paolo Cavara). (I used their first film in a course about “Images of Self and Other” when I was still at Cape Breton University.) The leading line in the CNN segment–“In a ritual that would terrify most mothers”–reminds me of the typical tagline for Mondo Cane stressing “shocking” and “astounding” acts, “real archive footage displaying mankind at its most depraved and perverse, displaying bizarre rituals, cruel behavior”, which also imitates the typical posters and bulletins of mid-nineteenth century European ethnographic festivals (see examples in Edwards, 1992). “Most mothers”, CNN says, but then immediately adds: “Indian villagers have cheered as screaming babies were dropped from a 50-foot temple tower”…so not Indian mothers, but most white, Western mothers, i.e., “viewers like you”.

As I have argued elsewhere, what CNN is doing, like other media outlets, is not just displaying, harmlessly and without intention. The more ambitious aim is to train their audience in acquiring and applying certain values which support Western domination. Needless to say, CNN knows what it is doing when it selectively chooses to use a terror word in its opening line. Then we find out these villagers are Muslim (and Hindu, but CNN places them second, even if they outnumber Muslims in India) and they are opposed (despite the absence of any evidence of any harm done to babies) by Rationalist International and the Indian Rationalist Association which both “support secularism”, among other goals (and I do not intend to suggest that there is anything “shady” about these organizations).

It is not at all clear that the rationalists want the practice banned because it is “unsafe”–safety, like the hygiene trope, is one that CNN chooses to insert. It has a colonizing and exclusionary function as a practice of domination: next to the “unclean” other, the dirty savage, we now have the “unsafe” other…who after thousands of years of child rearing still has not learned the basics of how to treat babies.

This is not the most disturbing behaviour one can expect from CNN–after all this was the company that cheered the bloody invasion of Iraq in 2003, with its weeks of whipping up spectators with “countdown to a showdown” (cowboy style), and its glowing assessments of “shock and awe”, and its mild-mannered questions to generals about ballistics and ordnance, some memorable examples from Doha press conferences being: “Are you considering dropping some JDAMS, sir? How have the Cobras fared in the desert climate? Are we going to see the MOAB in action?”. CNN is an insider, at the top of the society it occupies.

It does give us one more example of what mass-mediated discourse looks like without ethnography, without intellectual curiosity, and without honesty. After all, CNN drags in a talking head for every little tid-bit of political gossip, but can’t be bothered to call in one of the thousands of anthropologists in the US to offer a little contextualization.

ADDENDA:
As I posted the item above, I did not realize that this “news story” was slowly beginning to spread from blog to blog, from news site to news site (almost absent is any Indian coverage, with most of the sites I have seen being exclusively Western). Rather than try to comment on each item, let me simply post some descriptive links below (by no means a complete list, nor necessarily representative either), and show two videos, one from CNN and the other from Reuters.

Red Neck Riches Web 2.0: “When I seen this headline at Foxnews.com I was really afraid to read the whole story….The bizarre ritual of throwing newborn babies off a temple 50ft high….” — notes this as a Muslim practice.

BagOfNothing: “Babies thrown from tower for good luck”–“Worshippers at a Muslim shrine“

Babylune: “Babies thrown off temple for good luck”–FoxNews.com is reporting about a tradition that is done every year in India, I’m not sure on the name but the basic idea is to drop babies off 50 ft from the roof of a temple and landing on a cloth sheet. Once the baby lands on the sheet they bounce, this is considered good luck or health. I have no clue how they think this would be good luck unless they consider the baby not making it to be the bad luck….”

From other news sites:

ITV.com: “Devotees drop babies 50ft for luck….Worshippers at a Muslim shrine in western India have been dropping babies from a tower for good luck…”

Reuters: “Apr 30 – Muslims in western India have been observing a bizarre ritual – they’ve been throwing their young children off a tall building to improve their health….”

NBC Zeitgeist: “…shouldn’t you be more shocked that a human baby has just been dropped five stories in front of you?….Stop throwing babies from the roofs of buildings.”

From Craigslist, Sacramento, 01 May, 2008: “Baby Drop Day in India”–“Drop the little naked sucker from the top of the temple….TOSS YOUR BRAT from the top of your temple.”

Daily Comedy: “Drop It Like a Tot–Worshippers at a Muslim shrine in western India have been dropping babies 50ft from a tower for good luck…. In other news, Michael Jackson has been named Father of the Year in India.”

From SodaHead: Indian Baby Drop–What do you think of this strange 500 year old ritual?…”This is footage from an actual CNN report…”