I just love being in Anthropology. I think it is a great privilege to be in institutional Anthropology in this time…it’s like being among old colonials, secluded in a beautiful jungle estate house, 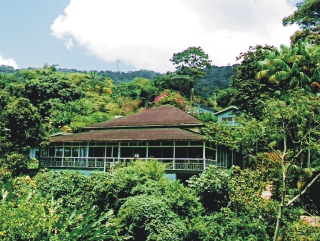 as we ponder the demise of our empire, the disrespect and sometimes fury of the restless natives who sense that independence is coming soon, and the occasional loss of one of our own at the savage hands of a native roadside bomber.

Some of us fan ourselves on the veranda, and then suddenly Professor Joyce Fitzgibbons on permanent sabbatical from Cambridge begins to sing a charming old number:

♫♫♫
School days, school days
Dear old golden rule days
Readin’ and ‘ritin’ and ‘rithmetic
Taught to the tune of the hickory stick
You were my queen in calico
I was your bashful barefoot beau…
♫♫♫

Those golden rule days, those days of golden ruling, of ruling over gold. Professor Fitzgibbons’ elder sister (photo above, to the right of Joyce) — “Oh just call me Pippa” as she always said — spoke with a sad smile, “We’ll miss seeing the sunsets over the savannas, the song of the kiskidee in the mornings, and looking out over Point Cumana, rum and coke in hand.” She asked me to go in the next room and turn on our antique gramophone and play her favourite record, and I oblige. ▼

Sipping my rum and coke, I reflect on how this was the perfect discipline for me. This discipline speaks to whole genealogies of conquest and occupation. In my case, old colonialism runs through my family roots: the father raised in an Italian colony in East Africa; the grandfather in the Italian airforce; the American grandmother from California who rushed her little boy past the pile of severed European hands and bowels; the other grandfather, a Viscount, who sired children in Jordan during one of his foreign adventures; the vacations we took as children in French colonies in the Pacific, and British colonies in the Caribbean; living in a country where colonialism springs internal; and, the wife, born at a time when her home was still a British colony. This is the discipline for me.

I love this time, spent in this old house, with old tales, old books, old stories, and old eccentrics. We are joined, finally, on the veranda by Dr. Sigismund Goodfellow (left), who has just been completing an exhaustive oral historical record among practitioners of Yoruba rites, with a generous grant, as he always reminds us, from the Livingstone-Chrysler Trust. He got up from his afternoon nap a bit bleary eyed but nevertheless ready to begin some late afternoon verbal play, with lashings of his wit, “To wit, to woo,” as he always said. “Will you be joining our little, shall we say, fiesta candida tonight?” he asks me with an ominous little wink as he passes his hand around my shoulders.

For madness had set in, as it always does, among old colonials as they ponder and gaze and grieve and despair and imagine about after, after their empire comes rushing to a close. The colonial madness that seems to afflict Caucasian conquerors of tropical “wildernesses” is well known and well documented virtually everywhere, and the fact that we hush it up so much is due to the fact that, well, it would be impolite and inappropriate to Brasso one’s wares in public.

Sigismund tells Arthur, down from a university in Baltimore, “In spite of what that reckless old fool Maurice says, we would indeed miss this grandfather discipline we call Anthropology…”

“I swear she has the ears of a bat,” Sigi mumbles. “The point is,” he resumes, “and you tell me frankly Arthur, for only the candid ones may be admitted to la fête de ce soir, while we would miss Anthropology, would they miss us?” He asks this sweeping his right hand out from his pocket and over the railing of the veranda, motioning across a Scarlet Ibis horizon. Arthur from Baltimore replies with a shrug, “Well, you know what I said, and you know what I do, and you ignore it at your own peril.”

Arthur (left, in his “field wear”) is a firm believer in status and respect, displayed through the acquisition of power in the form of capital and corporate connections. Arthur is the one who once dismissed me saying, “Max, you can go ahead and be the pathetic little Willie Loman of anthropology, but some of us prefer to screw on our fists, put on our conference faces, and go out there and get it.” Arthur’s father was in what we now call “direct sales,” and so was his mother, in a manner of speaking, as she had retired from “exotic dancing” shortly after spawning Arthur in 1955.

“Go where the opportunities take you,” continues Arthur. Sigi almost snarls, a corner of his lip quiveringly pulled upwards, “You are quite the madame, Arthur, a candid little madame I confess…but I never want to leave the Congo.” He did not mean Congo literally of course, it just happened that the television was on and the appropriate words flowed out of it in time ▼

So bongo, bongo, bongo, I don’t wanna leave the Congo,
oh no no no no no
Bingo, bangle, bungle, I’m so happy in the jungle, I refuse to go
Don’t want no bright lights, false teeth, doorbells, landlords,
I make it clear
That no matter how they coax him, I’ll stay right here
♫♫♫

I was glad to hear Dr. Herbert Gloss’ car come to a skidding stop in the gravel driveway. Herbert (left) is an economist from somewhere in Middlesex, here to advise the transition regime. In private, he is an acidic, self-deprecating, hyper critical, glib man who never lets anything escape his notice. He parks his keys down on the side table, smoothly swoops up a glass, fills it six fingers worth with puncheon rum, and drops a little token ice cube into it as if that will somehow dull the fire. “So what are you old cronies banging on about today? Oh no, don’t tell me, have you hit a speed bump on the way to your funeral arrangements?” Gulp. Sigi at that point actually makes a move as if to leave the room, stopped only by Arthur who has now reappeared naked and smeared with green paint. Sigi gets a warm smile on his face, forgets Herbert, and congratulates Arthur, “It is only 5:17pm, and yet you are already properly attired for la fiesta de esta noche” which he pronounces, as always, with a thick English accent, so thick that it sounds like he is deliberately making fun of the language, whichever language, perhaps his own.

“Oh yes, well I can’t miss this now can I,” says Herbert, as if speaking to himself.

Joyce and Pippa appear, like two mad parrots, their saggy white bodies festooned in feathers and cloth strips, and they shout imperiously, “Silence, silence, everyone! The dance begins.” These anthropologists, always so eager to reenact the dances and songs and myths of “the natives,” announce a departure from the norm. “This is a play on exoticism, our personal tribute to the old classic, Big Chief Ugh Amugh Ugh.” I am about to let something obscene splatter from my lips, but Herbert motions “shh” to me with a finger to his mouth and whispers, “This should be good. Bask in it.”

The dance proceeds. In the pause after the dance, Sigi breaks into the applause.

“Big Chief indeed!” exclaims Sigi, as if the dance reminded him in some oblique way about current events that have been dogging him. Look, the reader has to understand that Sigi has only two things on his mind tonight, his demented feast ritual, where they gather naked in a circle, preferably drunk, and dance around a bonfire, and his complaints about native hostility and crime. He continues, “I say, Big Chief indeed! Much like this new ‘First Minister’ fellow, Mr. Chief Walla Walla who got the Tomahawk Blues whilst pursuing a first in social anthropology and museumology at Oxford. He is treachery itself, treachery with a hearing aid and sun glasses.”

I really cannot contain myself at this point. “Listen man, you can’t just stomp around in people’s yards as if you owned them, as if you have some right over others, please, be serious.”

“Too right! Too bloody right I say!” Herbert is merely stoking the fire for a good fight, as he peers with one eye down to the bottom of his empty glass.

That must have been the only time I saw Sigi actually will me to death with his cold, hardening, narrowing little eyes, it really was intimidating.

Herbert intervenes, “No, Sigi, really let’s hear this Trojan Horse out, this should be amusing. I love to hear the bark of an underdog admitted to the Pig House, sorry, I meant Big House, and still barking his underdog language.” Sigi adds, “Fine with me, for as the local saying goes: let the jackass bray.” He lights a pipe with his back turned to me.

Colonialism runs in my family roots, and could have well privileged my family were it not for the inevitable stripping wrought by a World War. I grew up with an inheritance of champagne tastes on a mauby wallet, with many glimpses of privilege, but ultimately as a déclassé son of a white collar worker — an airline employee, coincidentally, because wanderlust seems to have a genetic strain to it. We lived for almost twenty years next to a 16-lane highway, and all emerged partially deaf as a result, and as very loud talkers, and with a desire to get the hell out.

Back to my comments to Sigi. I say, “You know how wanted you are, you see where the ‘informed consent’ is, in action, when the locals welcome you with roadside bombs. You have no rights here.” It was harsh, but the stench of despair and the madness it nurtured was too much.

This despair that leaves us — them — flailing about for alternatives, for anything to get a kind smile again, a warm reception, respectful tributes, and not the thousand inane taxi-driver questions about pyramids and bone collecting; to speak the name of our own and be met by a public that says, “oh yes I read her latest book,” rather than “who? sorry, never heard of her”…and that from fellow scholars! Despair as they ask why they are irrelevant, why they are not wanted, why nobody listens to them, and what about the contribution they have to make, how about their applied efforts, we invented the green button on photocopiers, we are mapping humanity to terrains that enable kill chains across Iraq and Afghanistan, we own ‘culture’, we forsake ‘culture,’ we are theorists, no wait we are ethnographers, we are ethnography itself, we are above it all, we are beneath it all, we are nuanced, we are complex, maybe we should go public, another pipe dream straight out of The Iceman Cometh. These people are quite blazingly mad.

As I leave, I see that somebody spray painted the words “SOON COME” and the outline of a machete on the front door.

3 thoughts on “Anthropology is Dead, Long Live Anthropology! (Who Wants to Leave those Golden Rule Days in the Jungle?) – 1.3”