Given the debate surrounding the proposed ban of “mixed-blood” marriages among Dominica’s Caribs, and the unexplained assertion that 1,000 “full blood Caribs” remain there, added to assertions made in the Taino Revival book that contemporary Tainos are really black people trying to deny their blackness by choosing a Taino identity, there seems to be a whole bundle of very contentious ideas, and some of these are re-provoked by the New Old World photo exhibition reproduced by the National Museum of the American Indian (see the earlier post about this here).
Arguments made in the Taino Revival book might apply with greater force in the case of the approach taken by Chief Williams, when it is almost impossible at this point to argue that anyone in Dominica is a “full blood Carib,” and where asserting purity in the face of persistent mixture becomes really questionable. Had the contributors to the Taino Revival book directed their criticisms at concrete cases such as this, then I might have agreed with their arguments.In the case of many of the Tainos I see online, please forgive me for being crass and superficial, but it is just not clear to my eyes by what definition or criteria they should be seen as “black” — unless the blackness that is asserted is carelessly racial shorthand for something deeper, that is cultural rather than biological. Anyway, it is not my job to fix their argument for them. The notion that Tainos are really just black people strikes me as taking the one-drop rule to the extreme, and without any reference to anyone’s actual genealogy. Even in the U.S., where we are commonly told that a slight wave in the hair might qualify someone as “black,” it is still not clear to me how one would view the Tainos and conclude that, really, they are black. By the way, I am sure that “wave in the hair” is an exaggeration, since by that rule most Italian immigrants would have been reclassified as black. All I am saying is that I do not see how and why the blackness issue would surface. And what I do believe is that a person who “looks” fully black to most North Americans, with their ethnic and racial biases and criteria, could still be entitled to call himself/herself Taino, because indigeneity is not about race, and apparent blackness does not erase multiple ancestries, and different ways of life that do not correspond with superficial appearance.

But when one mounts a photo exhibition showing continuing indigeneity in the Caribbean, that is when we will run into some of the problems raised in the Taino Revival book. I am very familiar with at least one, arguably two, of the communities depicted in the photographs, the Caribs of Trinidad and Dominica. What I noticed is a tendency to show the full face of those persons whose appearance would meet the stereotypical expectations of what a “real Indian” should look like, while others, perhaps “too mixed”, are photographed behind smoke, with their faces down. This can be a subtle, perhaps not deliberate, perhaps unconscious, way of conveying shame, embarrassment, and an attempt to disguise.

Face down, covered by smoke, the unreal Carib 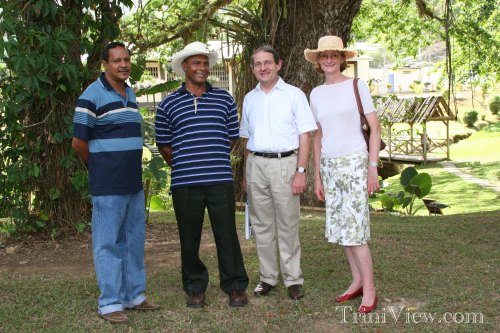 No shame here — any of a number of images of Cristo Adonis online,
facing the camera straight

I don’t like it and I do not want to waste time making excuses for someone else’s work. I think it humiliates people I know and deeply admire, people who are proud to show their faces and would not want to be seen face down like they were bowing and hiding. It masks their identity, and obscures their self-identification, and thus offends them indirectly, but in public, online. This photographic approach surrenders to everything the Taino Revival authors have argued, and Museums and photographers working with indigenous peoples today ought to be more sensitive, more cautious, and decidedly more conscious about their practices.

The presentation of photos at the National Museum of the American Indian also speaks to the power of the photographic image in Western culture. What I mean is that it reaffirms and fortifies it, as does the Museum itself which of course bases its practice on all that which is tangible, physical and visible. In the end, it’s Western culture, Western media, and Western technology that win.

The problem with that is that indigeneity is often not reducible to the observable, to the body, the face, that which can be seen. Thus one form of visibility comes at the expense of acknowledging that which is rendered invisible by photography, or the head bowed away from the camera. The bigger problem here is that attempting to photograph indigeneity can reduce it to a physical substance, and reaffirm racial ideas in the process.