I found my captor and tormentor! I found my captor and tormentor who subjected me to an afternoon of torture, appearing in noisy, nauseating technicolour dreams for long afterwards, until I learned to love him and all those like him. I am referring not only to the supreme Amitabh Bachchan (see this biography as well), but to Bollywood in general. Of course I knew of Bollywood music well before that nightmarish afternoon of delayed ecstasy — it was the sound of women, sounding like shrill mosquitoes, and men who resembled doll-like versions of Elvis. I never cared for the music, that is, until one afternoon in 1992. This is my little story of Stockholm Syndrome, Bollywood-Trinidad style, and the blessed psychosis that is called “cultural shock”, sometimes experienced on the way to “going native.” The hostage-taking unfolded in Monarch Cinema at 49 Eastern Main Road in Tunapuna.

On a dry, hot, bright Wednesday afternoon in 1992 I sought a means of escaping Trinidad, at least in fantasy. It was a bad period, and I had a recurring dream of running through a jungle with a group of bedraggled East Indian men, where we would come to an abandoned airstrip carved out of the jungle, and a huge gleaming Boeing 747 hidden under layers of palms, and how we would climb in and figure out how to fly out of the green hell. (Incidentally, I was in Trinidad as a graduate student in International Relations, an appropriately imperialist field of study taught by technocrats and out-party ex-ministers of this postcolony — yes, Hans Morgenthau and “international politics, like all politics, is a struggle for power” and other Cold Warriors like James Rosenau and George Keenan.)

I rarely went to the cinema alone, but I could find no one who would come with me to see David Lynch’s “Twin Peaks: Fire Walk With Me.” “Twin Peaks” had come to Trinidad a few months before, when it was shown late on Sunday nights on the then new CCN-TV6 channel, an exciting change for one-station Trinidad. Few people would stay up late to see this bizarre program, and some who caught a glimpse of it would screw up their faces at it (as they did when telling me what they thought about it), unable to comprehend the bizarre surrealism of an evil midget doing the twist on a couch, or the guiding wisdom of a giant who appears in dreams, or the “log lady” and the colonel in the coffee shop, and FBI Agent Cooper who uses dreams to hunt down paranormal crimes. It was too strange, which in itself is strange since Trinidadians can be so very strange in their own tales. And so I went, excited to continue indulging my North American Twin Peaks fantasy.

I reached Monarch Cinema, and it was a Wednesday, as I mentioned. I saw hand painted posters for Indian films plastered on the exterior. One said “Ek ladka, ek ladki.” Given the symmetry and sound, I wondered if this was the Hindi title for the film, “Glengarry Glen Ross.” “Twin Peaks,” and both of the two films just mentioned, all appeared in 1992.

I went to the tiny window of the box office and asked for a ticket. The Indian man looked at me and said, “You mean for now?” Odd question. I got my ticket, bought a few squares of guava cheese, and went to sit down.

After a while, people start coming into the cinema, but very few, and all of them Indian, without a single exception. All of them also glanced at me as they passed, some twice, as if there was something unusual about my being there. I thought that maybe it was just because I looked foreign, or Syrian (back then I was frequently mistaken in public for Anthony “Zoom” Saloom, a Syrian calypsonian — “Syrian” in Trinidad is amorphous, used to describe any person of Middle Eastern origin, and they can be Christians, Jews, and Muslims). I thought that only Indians came to the film the same way that the majority of heavy metal concert goers in Trinidad are also Indian, and that “Twin Peaks” might have been more to their tastes? Whatever, I was desperate for a plausible explanation.

The lights dimmed and then went off … and the nightmare began. I tried to convince myself, “No, it must be just a preview.” When the “preview” went on for longer than 10 minutes, I told myself, “Stay calm, it must be a double feature, and Twin Peaks will come after this.” After two hours nothing changed! The air conditioning was so cold that I got stiff. I did not want to just get out of my chair and storm out — it might be read as offensive by the other patrons, and the man who sold me the ticket would say, “You see he, what an ass, he don’t know what movie he come to see.” So I felt constrained, to stay there, my eyes wide open like saucers in sheer terror at the sight of this oversized, brick-headed cross between Elvis Presley and Frankenstein, doing big pelvic thrusts on stage in a concert in London. If I had the ability, then, to stand outside myself I would have appreciated that I was still getting a Twin Peaks-like experience of a different kind.

The title of that “shocker” was “Jumma chumma in London.” I even found a clip from the very film that subjected me to such anguish resulting from the conflict between confusion over a film not shown, and a desire to flee, and a sense of socially constrained stillness:

The song that had such a lasting impact on me, the feature song of the film, is titled Jumma chumma de de, and is sung by the superhero/superstar Amitabh Bachchan. The full video of what one youtuber calls a “monumental song” is available here, and monumental might really be right … wait until you reach precisely 1:00 into the song, the Nazi point as I call it, stirring rallying cries and demanding summons … and if it makes you suffer, then suffer through the whole blasted thing! This is anthropology here, and anthropology is pain and self-change:

What I had completely forgotten is that for this cinema all Wednesdays were devoted to showing Indian films only, with the scheduled film of the week shown every other day. I returned to my apartment in St. Augustine that afternoon, quiet and brow beaten. I went to lie down on a bed that felt like hot bread just out of the oven, and all I could hear was Jumma chumma and see Bachchan thrusting, thrusting away, with his huge hands and massive head. I told people about this experience, hoping they would say something that would help to cure me, and instead they just doubled over laughing. And yet, the video has a disturbing quality for me: the images suggest that this is a giant gang rape, accompanied with a massive sperm hose, to subjugate the naughty bimbette who presumably asks to become the star Abusiña. 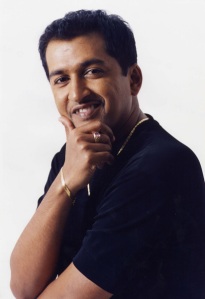 Years later, Trinidadian Chutney Soca sensation, Rikki Jai, would do a memorable remake of this same song, so it was never going to go away. Rikki Jai is brilliance on legs. In fact, I think it was his version that finally converted me to the strength and monumentality of Bachchan’s song, which now rang in my head forever after. I found the Bachchan original by first looking for Jai’s remake. And it was thanks to Rikki Jai that I was eventually turned on to all forms of Indian music, not just Chutney Soca, but also classic bhajans and ghazals. Having the right friends to recommend material to me also made a lasting difference.

To this day I do not know what is said in the Jumma Chumma song, and it does not matter. I am a devoted convert to a sound and to images. I dreamt of this song for months afterwards. And now after 16 years I finally found it, on YouTube, where I realized how I was first called to Bollywood, precisely when and where, and through which song.

Now in Trinidad, on lazy, peaceful, warm Sunday afternoons with long golden, orange rays and tall shadows, a car with two massive megaphones on it will pass, blaring Bollywood music as it leads an Indian wedding party. The Doppler shift is impressive, and in slow motion. And whenever I hear one of these wedding parties approach I feel like I am transported to Heaven and I beg: “God, never take me away from this place.” And when I think about it, my prayers have really been answered.

Note 1: When I mentioned “the Nazi point” I did not mean to suggest anything about Bachchan’s politics, but rather to aesthetics alone, viewed through my lens. Bachchan successfully ran for a seat with the India Congress Party, and was a personal friend of Rajiv Gandhi and his mother, Indira.

Note 2: I am using this post to kick off a new series on this blog, that I will call “Notes from the Indian Diaspora.” Chutney Soca, and the mutual communication and interrelationships between Indians in India, Indians in Trinidad, and the role of anthropologists with roots in the Indian subcontinent, will be the centrepieces of the series. Afterwards, I will go back to the militarization of anthropology, through the work of David Price mostly.