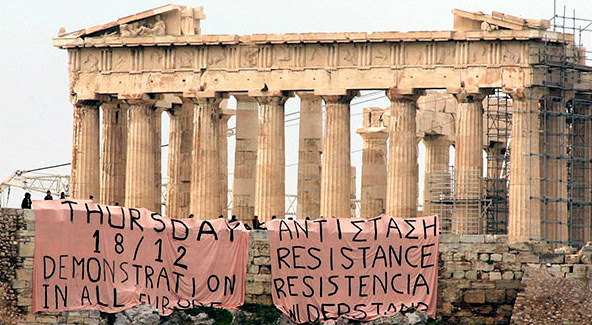 As reported by On the Greek Riots, the Globe and Mail, the New York Times, and circulated on twitter and Youtube (see video below), the Greek protests continue and are becoming even more spectacular, in the original sense of the word as a “specially prepared or arranged display.” In a moment when more solidarity actions are being planned around the world, this image, broadcast by the mainstream international media, is a sign of encouragement, a special message sent by activists who are able to momentarily seize mainstream media with as much efficacy as they have mastered social media. The action was deemed important enough that a government spokesman, surely located not too far from the rubble of almost two full weeks of rioting, declared: “There can be no justification for this action. This hurts the image of our country abroad … it is unacceptable.” This in light of an estimated 1.5 billion euros in damages.

The banners, in four languages (English, Spanish, German, and Greek) called for solidarity actions across Europe for Thursday, December 18, tomorrow. Solidarity actions have occurred in more than 20 countries — almost every country in Europe, often with actions in multiple cities, in Canada, the U.S., Chile, Australia, and New Zealand. Is this another 1968, another world revolution?

(Meanwhile, Paul Jones Watson at infowars is expecting the same, only with worse results in the U.S.)

One thought on “Another Banner Day for Greece: The Acropolis of Resistance”