Another Chapter in “Border Studies”

I was reminded of one of the stuffier, starchy clichés in Barack Obama’s speeches, about a “more perfect union,” as I thought of two seemingly disparate facts: the strong subterranean movement of socialist and anti-imperialist thinking and practice within Québec, and the fact that Vermont is one state within the U.S. that is strictly off limits to George W. Bush and Dick Cheney. I thought, there is an even better union, and in some respects it has been the stuff of actual practice, of everyday life, as we shall see below.

A Bush-free Zone, ahead of the times…

Should Bush and Cheney visit Vermont (where Bush has never set foot as President), they will have to plan their route carefully, or risk arrest for crimes against the constitution and war crimes. They have been formally indicted by the towns of Brattleboro and Marlboro (see: “Vermont towns indict Bush and Cheney for ‘crimes against our Constitution’,” The Guardian, 5 March 2008). Some local legislators have also moved to withdraw their National Guard troops from Iraq. Other towns in Vermont have passed resolutions calling for the impeachment of Bush and Cheney (Reuters, 5 March 2008). A few days ago, on 4 December, Brattleboro made the news again, with the town saying it is serious about enforcing impeachment measures against Bush (UPI, 4 December 2008).

The Sarah Palins of America would probably label Vermont as “un-American.” Vermont’s citizens, after all, are noted in the mainstream media as having a mind of their own (see “Introduction to Vermont” in the New York Times). Sinclair Lewis, the state’s Nobel-prize winning author, praised Vermont as a place that escaped “American mania,” a place that resists commercialism and Walmart as much as it resists the skyscraper (same source).

The Borderline Personality Disorder: Teaching people out of freedom, to see like a Militarized National Security State

Can such independence be tolerated by the state that internationally proclaims its war measures and torture as tools in the “fight for freedom”? Obviously not. And this takes me to the bulk of this essay, the ways that some residents of Vermont and Québec learned to live without border pathologies, and the ways that the Canadian state in alliance with its American senior partner seek to teach people so that they may develop borderline personality disorders. Besides sharing commonalities in their politics, “border” residents in the two territories share a great deal more, and the imperial state reasserts itself at home with almost as much vigour as it does abroad, to introduce new ruptures and to bifurcate and bureacratize the lives of citizens placed under surveillance.

One way to teach people is through mass media and entertainment. Shows such as the Canadian Broadcasting Corporation’s The Border (see here, and here), like all training programs of its kind, hopes for passive viewers that will identify with the heroes of the program (including a CSI Miami reject playing the role of a Toronto-based Homeland Security agent): officers of the state, on the perpetual lookout for transgressors, the villains, in fact us potentially. It’s not just a police program, it is designed to get viewers to police their own minds, to align themselves to the state, to think about always looming threats, risks, insecurity, and to build little imaginary cops to patrol their own brains. It lulls viewers into a false sense of complexity, by asking trite questions derived from a strictly limited moral and political universe (for more, see “Defend the Border: The CBC’s new show can only help ‘the bad guys’,” Justin Podur, Znet, 6 January 2008).

But in a post-9/11 world, the streets that snake without border control between Canada and the United States have become too risky for the U.S. Department of Homeland Security and the RCMP, who have agreed to erect a physical barrier to delineate the crossing and force people through a checkpoint. (source)

The other way to train people out of their everyday practice of life without an international border slicing it in half, is to introduce surveillance cameras and fences, the way that is being done along the Québec-Vermont border, to bust that better union that has existed until now (see: “Quebec, Vermont residents bristle at border barrier,” CBC, 03 May 2007). The aim is to bring “9/11” down to the level of the everyday, to domesticate it, to make sure it becomes part of everyone’s personal vocabulary, to internalize it, to make it the cornerstone of their whole philosophy of being and worldview. (Since there are those who believe that Obama is a progressive change, my question to them is: Has Obama vowed to dismantle the Department of Homeland Security? How about the Patriot Act?)

Showing an enduring independence of mind that gives one reason for hope (not of the sham kind), residents stated:

“Why do we want a fence, which will look like the Berlin Wall here?” asked Stanstead Mayor Raymond Yates.

“I think we’re giving in to the terrorists here by having to change our way of life,” said Buzz Roy, a town official and pharmacy owner.

(Unfortunately, this is not a story just limited to Québec-Vermont, but to a number of First Nations, in particular Akwesasne/St. Regis, itself cut by a colonizing border. Likewise, First Nations have also been subject to surveillance as potential sources of “illegal” cross-border traffic, with some suggestions of potential “terrorism.”)

Imperial Settlings and the Unsettling State 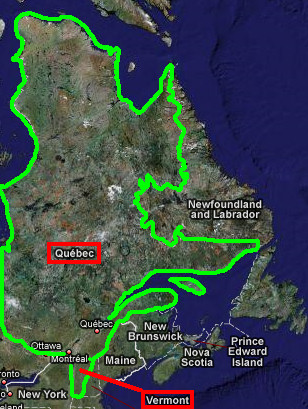 Let us go back to that picture of lived unity, of transborder exchange that in fact paid little attention to any state-imposed borders, not in the past, and not until recently. I am speaking of the border separating the Canadian province/Nation of Québec and the U.S. State of Vermont, and in particular two towns in the respective territories, Stanstead (QC) and Derby Line (VT).

The history of these territories, and the towns, mirror each other: Vermont was once a part of New France (at least until 1763), from which Québec emerged, both territories sharing the names of key French figures in their historical tales, Jacques Cartier and Samuel de Champlain, with the French founding the first European settlement in what is now Vermont. Today, Vermont still has French place names, including the name of the state, and the name of the capital, Montpelier, while some of Québec’s southernmost towns, the so-called “English townships,” bear English names. The northern part of Vermont still has a large number of people of French-Canadian ancestry, and indeed, 23.3% of people in Vermont are of French-Canadian ancestry, with some 2.5% still speaking French at home (source). Mirroring this history, Stanstead (QC) was founded by a family that came from New England, and grew once United Empire Loyalists settled in the town.

Founded by empire, divided by inter-state imperial wars, united by the actions of “ordinary” people, now being forced apart once more by states — that is life in the pre-border, trans-border, re-bordered zone, and it seems that people are rightfully getting sick of it. 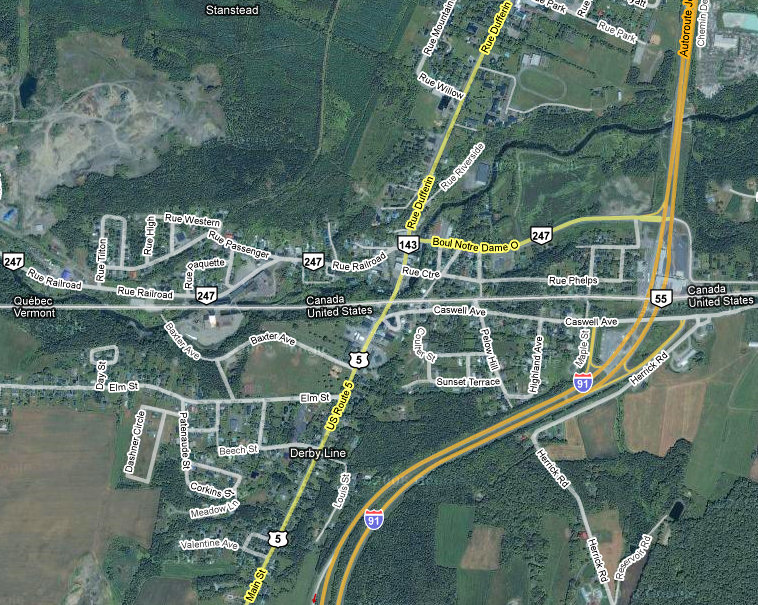 Towns such as Stanstead and Derby Line have a shared history, a shared population, and shared facilities. (Other areas joining the province and the state even have a shared legend of a mythical monster, Memphre, on Lac/Lake Magog). A Stanstead resident told a CBC reporter: “There are a lot of border people like myself. Families intermarried, lots and lots of tradition and history intertwining in two countries.” As one journalist put it: “Residents share both public services and knotted bloodlines” (source). 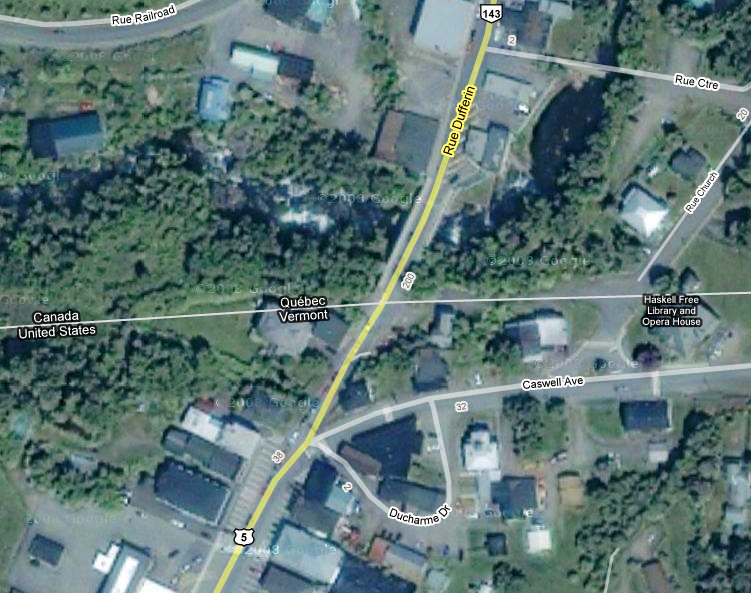 Sharing facilities was the case until the newest reign of terror set in: the institutionalized and globalized paranoia of the U.S. Department of Homeland Security, seeking to divide up the world and keep people apart, with serious disadvantage even to at least some American citizens.

Derby Line is known for the Haskell Free Library and Opera House, deliberately constructed on the international border and opened in 1904. The donors were a binational couple: Carlos F. Haskell was a local American businessman who owned a number of sawmills, while Martha Stewart was Canadian. The intent was that people on both sides of the border would have use of the facility, which is now a designated historic site. Patrons of the library from either side of the border may use the facility without going through border security.

In some places, the international border runs through individual homes, so that meals prepared in one country are eaten in the other. An entire tool-and-die factory, once operated by the Butterfield division of Litton Industries, is also divided in two by the border.

Derby Line shares water and sewer systems with Stanstead as well as emergency crews which respond to calls on both sides of the border. (emphases added, source)

The sharing extended to the currency field recently as well, when the Canadian dollar began to soar above the American dollar, until its latest slump:

Utility workers in a pair of Quebec-Vermont border towns have asked to be paid in Canadian dollars instead of American dollars, thanks to the soaring value of the loonie.

The neighbouring towns of Stanstead, Que., and Derby Line, Vt., share water and sewage systems which are run by a team of 15 American and Canadian employees who had been paid in U.S. dollars because they were worth more.

But starting this week [Nov. 7, 2007], the workers will get paid in Canadian currency. (emphasis added, source) 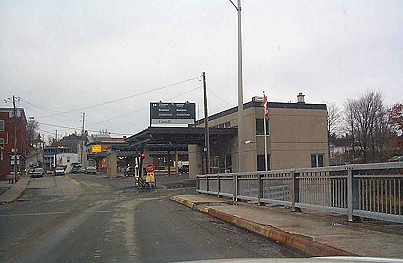 Thanks to a renewed sealing of the border, fire brigades on the Québec side can no longer respond immediately to fires on the Vermont side, so that some buildings in Vermont have been razed since their towns were dependent on Québec’s fire services. 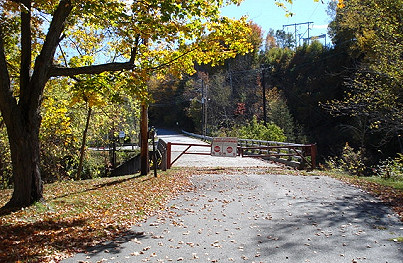 Keeping the towns apart, physically is no simple task. Aside from the fact that some homes sit on the border itself, some streets continue across the border, and the border runs through the natural landscape that people use. One man was also reportedly “intercepted” by U.S. border patrol agents…at the edge of his own driveway (source). 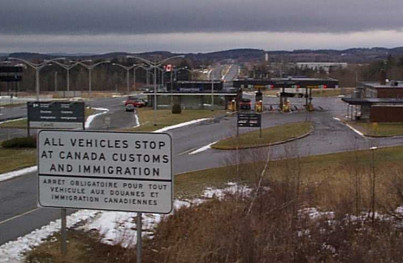 While the state can project power into small towns and try to transform them into outposts of the national security state, there is one irony: it also makes such towns “media worthy,” and brings them to wider attention, placing them on a world map of deleterious social changes, and also brings out the positive lessons that they have to offer. They serve as role models for alternative futures, rendered plausible because they were firmly part of the lived and shared past. That is what made them targets, and that is what makes those who target them our targets in turn. Where a border is asserted and imposed without legitimacy, without need, it invites repeated violation, and it will be eroded once more.

For more information on the Nine-elevening of Canada, see David Parker’s “The Anti-Terrorist Battle Inside Canada’s Borders,” in The Dominion (Media Coop), 17 July 2008.

For a well designed interactive tour of the persons and history associated with some of the old small towns of Vermont, see this tour on the New York Times website. Brattleboro is also featured.

To show us new ways of building solidarity online, without borders, and against borders, see Montréal’s Solidarité sans frontières, and No One Is Illegal-Montréal.

Finally, to those cosmopolitanist anthropologists who choose as their targets only the identifications of those on the bloody end of the world-system, without questioning borders, states, and national security doctrines…please finish your homework.

5 thoughts on “Québec-Vermont: An Even Better Union, Against State-Sponsored Fear”