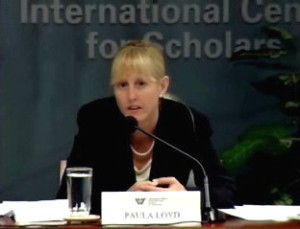 Nowhere has the apparent death of Paula Loyd been officially reported, nor is there any apparent notice of her passing or of a funeral notice posted in any paper that is also on the Web. In addition, the website of the Human Terrain System does not have an entry for her under its “In Memoriam” tab.

Paula Loyd was a member of a Human Terrain Team in Afghanistan when she was doused with petrol and set alight by an Afghan on November 4, 2008. Her attacker was executed while detained, and she was flown back to Texas for treatment. Previous posts about Loyd on this blog, including a video, are here and here, with additional discussion here and here. This makes her the third researcher to have did while employed with the Human Terrain System.

In recent days, despite the discussion of Gaza taking place on this blog, there has been a large spike in the number of visitors searching this blog for Paula Loyd, as well as new comments on a story several weeks old. Many of the visitors seem to be clicking links in email messages, which to me suggested that the link to one of the posts was being circulated. This motivated me to find out what the possible reason was for what seemed to be an attempt to distract, or perhaps a coordinated attempt to counteract the positions taken on this blog — mere speculation of course. As I searched for possible reasons for the recent renewal of interest, by chance I was led to what is news that at first appeared to be a month old.

[Update: anonymous comments on another site state that Paula Loyd died yesterday, January 7, 2009, which might explain the increased interest in her story. Another comment says her death happened on January 6.]

Quite by accident, through Twitter, I found a rather romantic article in a San Antonio site, to which the following comment was posted:

Kelly Loyd:
Paula was my aunt and we loved her very much, unfortunately she passed away this morning after an incredible battle for her life. She and her life will hopefully serve as an inspiration to others. She spent her life helping people. In know that sounds ironic to say about a military woman, but her goal in the military was to rebuild, both lives and services. She loved her job and her family and her country and, in the end, sacrificed her life for it. She is truly one of many American heroes and I loved and respected her greatly.

Why was her death not reported by the media? Why does even the HTS website not mention her death? Or is this almost invisible announcement a hoax? If a hoax, it would be a rather twisted mind that produced it, and I am inclined to believe that the source is instead genuine. I can also appreciate that for matters of privacy the family would want to keep news of her funeral private. That does not explain HTS not acknowledging her death.

[Update: since this blog broke the story first, it is now being picked up by others, and the news has not been contradicted by any source.]

Following the report’s appearance on this blog, Wired’s Danger Room picked up the story and seems to have confirmed its veracity by speaking to HTS employees. In addition, another anonymous commenter claiming to be a family member of Loyd’s is confirming her death in a comment below.
_____

UPDATE #2: “Contractor dies from Afghanistan burn injuries,” By Matthew Barakat – The Associated Press – Posted : Friday Jan 9, 2009 13:15:17 EST – in Army Times (thanks for the notice from a commenter below).

UPDATE #3: More on the now reported death of Paula Loyd:

BAE Systems Statement Regarding the Death of an Employee, Friday, January 9, 2009.

So this brings me back to “Keltorttruth”, posting here, here, and here, between January 6 and yesterday, January 7: what a coincidence that you should be engaging me in debate about Loyd just on those particular days, and at the same time you and/or other anonymous commenters were announcing her death on more sympathetic blogs. What were you hoping to set up? I am assuming that only family, close friends, and people in the military would have been privy to knowledge of her death. Which one are you? Silence.

20 thoughts on “The Unreported Death of Staff Sgt. Paula Loyd of the Human Terrain System: Third Researcher to Die”