Ward Churchill’s legal team rested its case on Day 13 (Wednesday, 25 March, 2009) in the wrongful termination suit against the University of Colorado. The trial is expected to come to a close this Friday, on Day 15, as scheduled. Day 12 (Tuesday, 24 March, 2009) saw the second day of testimony by Ward Churchill on his behalf, accompanied by more supporting testimonials from scholars, from Russell Means, as well as his wife,  Natsu Taylor Saito, a Georgia State University law professor, who took the stand on Wednesday.

A number of exchanges of critical importance to Churchill’s case took place on these two days, further solidifying his argument that he had first been “tried” by politicians and right wing media celebrities, and by intense pressures placed on CU faculty and administrators to remove him, in a climate of both political and professional fear. Churchill also corrected a couple of inaccuracies in his own research, on specific points of the 1837 smallpox epidemic among the Mandan — a discussion that would seem to be best suited for conferences and classrooms than courtrooms. Indeed, the level of what often seems to be petty academic detail has put at least one observer to sleep:

we got a full hearing of how Churchill wrote an essay that was published under the name of Professor Rebecca Robbins which was then cited by Churchill in another essay he wrote (this one under his own name) to support a point made in the Robbins essay written (remember) by Churchill himself. Which may or may not be a case of circular academic fraud, but is definitely one of the strangest linchpins of a case to ever make its way into Denver District Court.

Listening, you either got light-headed — maybe this is what happened to the juror [more below] — or you got bored out of your mind.

I expected fireworks. Instead, I got nap time. You can blame Churchill’s lawyer, David Lane, who has brilliantly framed the case as an academic food fight — in which one group of academics says Churchill is a fraud and another says he’s a martyr and another wonders if it’s possible to be both — leaving any reasonable jury with one obvious question: “I’m spending how many weeks doing this?”

Or you can blame the University of Colorado, which should never have been here in the first place. (“World Has Moved Beyond Churchill,” by Mike Littwin, The Denver Post, 25 March 2009.)

A reporter covering the proceedings seemed to make similar observations, with an almost comical exchange between Churchill and the CU defense attorney:

Cross-examination often slid into an abyss of academic minutiae and citational details that even prompted O’Rourke and the witness to express confusion and frustration.

“Was there a question in there?” Churchill asked O’Rourke, after a particularly complex query.

After a lengthy Churchill response, O’Rourke leaned on the podium and said: “I don’t even understand what you just said.” (source)

As alluded to above, jurors (who are allowed to submit questions while the hearings are in process) submitted some very pointed questions that would suggest (perhaps prematurely) that they may be leaning in Churchill’s favour, and that they perhaps find the academic minutiae to be less than vital.  In fact, two similar questions were submitted over these past two days that go straight to the political heart of what CU has attempted to mask as a purely academic debate. On Wednesday, a juror submitted this question to Todd Gleeson, dean of the arts and sciences college, who testified in support of CU:

“Do you feel that had threats not been made to the university regarding funding and CU was not under such scrutiny by the public and the media, that the firing of Churchill would have taken place?” (source)

On the previous day, Tuesday, Churchill was asked by a juror:

Juror question: Would all of these allegations have surfaced if it was not for the 9-11 essay?

Churchill response: “I think the easy answer in that one is no. They would not. In fact, some of these having to do with the Indian Arts and Crafts Act and the Indian Allotment Act had been known by the individual who had forwarded it in the form of a formal complaint. It had been known since 1999. John LaVelle had provided a copy of the article that the allegations were made. He did that shortly after the piece was published.” (source)

Another juror question addressed testimony given by several university faculty and administrators throughout the trial that stated that one of the reasons Churchill was dismissed was that he never apologized and owned up to his mistakes.

Juror question: “Do you feel someone should apologize for something they dont find they did wrong just to satisfy others,” read the jury question. (source)

A number of the other questions submitted by jurors also seem to indicate that they are asking themselves questions that may give Churchill the greater benefit of the doubt (see this) and that some of these may be “bad news” for the University’s defense (see this).

In terms of the climate of political fear and persecution, David Lane, Churchill’s attorney, had the opportunity to spotlight “a February 2005 resolution from the regents — in which the school stated its intention to investigate Churchill’s writings and speeches to see if it could find grounds for his dismissal — as proof that it had no interest in free speech protection” (source). Moreover, while the University (CU) claims it that its aim was to investigate charges of research misconduct, Lane noted the curious incident where once CU believed it had enough to “hang” Churchill, it ceased to look into further allegations that were received — the response being they were not “serious” enough or “time constraints” dictated otherwise (source).

Speaking to the fear and persecution, occasioned by the hysteria unleashed over rightwing media flogging Churchill’s 9/11 essay, Churchill’s wife related the following: 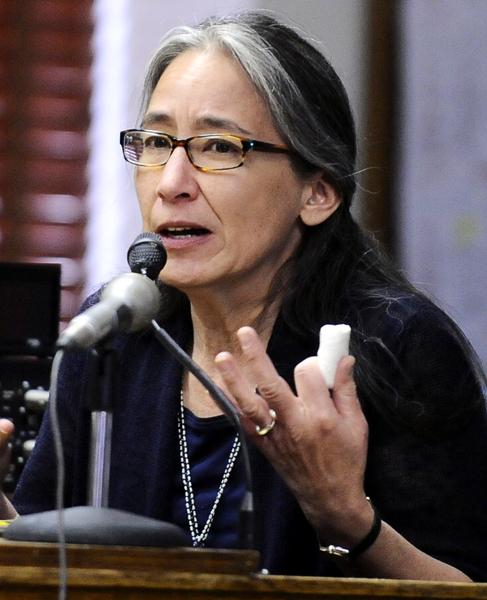 Natsu Taylor Saito, Ward Churchill's wife, testifies in his civil suit against the University of Colorado at the City and County Building in Denver, Colorado March 25, 2009. CAMERA/Mark Leffingwell

…when the essay was widely publicized and caused a firestorm across the country, Saito said her and her husband’s world became like “Alice in Wonderland,” where nothing made sense anymore.

She said the ethnic studies department received “thousands” of “ugly, racist” emails and letters, a couple of which Lane put up on the screen for jurors to see.

One read: “Tell Ward my ancestors killed a lot of Indians and I’m proud of it.”

Saito said professors, especially in the ethnic studies department, began to fear for their jobs because the tenure system came under attack from both the Colorado governor and the General Assembly.

[Alternate recording: She testified that the ethnic studies department received thousands of “ugly, racist” e-mails and letters and that faculty members at CU began to fear for their jobs because of a growing attack by politicians and pundits on the system of tenure, a form of job security for professors. (source)]

“They were afraid, they were scared their protections would be eviscerated by this review (over tenure),” she told the jury.

She said CU afforded no protection to faculty against external pressure once the uproar was in full swing and never responded to a letter professors sent the school asking it to stand up against the racist assaults.

“All of the university rules were being completely turned on their head,” Saito said. “It was like every rule they had on the books was going out the door. It was exhausting and frustrating. There was a lot of sense of abandonment. All these people who said, ‘Yeah we got your back’ were suddenly nowhere to be seen.”

She testified that she left the university in May 2006, around the time her husband was found guilty of academic misconduct.

“I realized this was an untenable situation,” Saito said. “I was really upset because the university failed to take a principled stand.” (source)

Yet, the CU defense attorney attempted to mock the idea that the 20 members of the Privilege & Tenure Committee recommended his dismissal as part of a political conspiracy, ignoring the pressures toward “group think” that were provoked in terms of CU becoming the centre of a scandal generated by the media, the generalized 9/11-national security hysteria that gripped the U.S., and the faculty members’ fear for the longevity of the tenure system that benefits all of them. These are very serious pressures, not easily ignored, and one can find countless and continual examples of group think in everyday social life, in fact, to a degree it is the very stuff of social life (source).

The questions jurors will have to ask themselves (and there are indications that they are already asking themselves these questions), is what is the significance of the academic detail? Are Churchill’s alleged infractions worthy of firing? Are the alleged infractions indisputable and unambiguous? Was the CU investigative committee’s report beyond reproach? How did the whole process come to take place?

Also, another news video for an item featured earlier, this one offering much more detail and actual coverage of the testimony of former Colorado Governor Bill Owens, on the question of political pressure applied to CU to fire Churchill:

Finally, please note that some videos that for technical reasons cannot be shown here (they are all stuck on “auto play,” producing a cacophony whenever the blog is visited), are featured in Open Anthropology TV: