The period of bifurcation, chaos, and wild fluctuations out of which will emerge a new order (but one impossible to predict in advance) is in fact the description of the third time of historical social systems, that of structural crisis. It is the view of many world-systems analysts that the modern world-system has entered this third moment of time. It is important to note that, in this third moment, the processes adumbrated as constituting the mechanisms of the “normal” operation of the historical system do not cease to operate. It is merely that they no longer serve the function of restoring some kind of equilibrium; they may indeed exacerbate the fluctuations. Hence, world-systems analysis has elaborated a fifth kind of TimeSpace that is applicable to this period. Borrowing Paul Tillich’s concept of kairos, it may be labeled transformational TimeSpace. — Immanuel Wallerstein (source)

[when] a system, any kind of system, enters a moment of bifurcation and therefore is coming to an end [then] two things happen: the structure becomes chaotic and secondly it becomes one in which small input gets great output as opposed to a normally functioning system in which great input gets small output….we’re going to be in a chaotic, confused situation which is going to be a real struggle about the new order that is going to constructed and in which our behavior really matters. That is to say unlike fifty or a hundred years ago when we worked very hard and organized very hard and in the end it didn’t get very far, the revolutions turn out not to be so revolutionary. Now very little input will get very great output….every little touch by us in the next twenty to fifty years is going to have a big impact and it may not be the impact we want if we touch it in the wrong way. So we have to talk a lot and think a lot and worry a lot about the ways in which we should in fact make this collective struggle. — Immanuel Wallerstein (source)

As part of my education since I first entered university, I have done a great deal of reading, and research of my own, concerning resistance, rebellion, uprisings, and social movements engaged in protest, whether in Latin America or the Caribbean, among slaves, peasants, or urban working-class Muslim minorities. Teaching our Department’s course in Political Anthropology, with the aid of John Gledhill’s Power and its Disguises and Joan Vincent’s reader, The Anthropology of Politics, has of course helped to cement this interest in social movements, resistance, and insurrection. My background in world-systems analysis at the graduate level, with the influence of the works of Immanuel Wallerstein, Terence Hopkins and Giovanni Arrighi, specifically dealing with antisystemic movements, was also of fundamental importance to me. While it is difficult to distill the commonalities among a wide range of writings in a single blog post, there is one element that I always thought was underplayed and sidelined, except perhaps in some of the historical research done on Caribbean slave societies (and yet even there it was insufficient, for good reason I think), and that is the role of the largely invisible individual in fomenting or at least aggravating friction within a given social and political order. 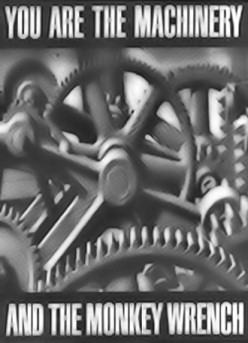 I am speaking here of the resistance of the single-cell organism, the cell with one member alone, not coordinated with other cells. The following reflections are not motivated by any sense of futility, of resignation, or disenchantment with a wide variety of strategies aimed at achieving political transformation, nor are they meant to suggest alternatives to replace what we know of as both protest movements and insurgent armies. However, there certainly have been problems with: (a) cooptation of leaders and activists (Mexican politics, at least under the dominance of the Institutional Revolutionary Party, possibly providing the classic example); (b) predictable ideological positions (even among anarchists, some of whom have gone as far as mapping anarchist thought as a static entity, in the form of a user-friendly FAQ); (c) well-disclosed forms of organization among oppositional social movements; (d) the public organization of resistance by using social media, such as Twitter, which would seem to be one of the most counterintuitive, self-defeating forms of telegraphing one’s intentions (indeed, Twitter “revolutions” have thus far been just that: Twitter revolutions); (e) collaborators within a movement, and those who weaken, or are tempted, or intimidated into leaking information to the authorities (and once you get the notion into your mind that the leader of the movement may be a collaborator, you can almost never again work in an organized movement); (f) the problem of cultivating consciousness among members of a group; (g) maintaining momentum and internal morale; (h) revising strategies and tactics to suit shifting conditions; and, a whole host of other problems that necessitate thinking about alternatives.

An additional source of increasing concern and ambiguity for me is the role of the Internet in organizing resistance, especially the publicly accessible Internet with efforts that use popular social media. Early “dystopian” literature on the U.S. military’s release of the Internet for public use has been largely borne out in my view, and one begins to reconsider the nature of this “gift,” since it has become the authorities’ best tool of surveillance yet, made so by our own dedicated efforts. On the one hand, online protesters can be relatively harmless, busy on a treadmill like this blog, active in a virtual playpen. On the other hand, they can be harmful to their own efforts offline by leaving an audit trail. Looking at Twitter, R.A. Louis reflects the view that, “it is a part of the larger technical communication apparatus which evermore seems to be recording all publicly expressed opinions and the networks of friends who may share those opinions. With this in mind, I wonder if radicals are exposing themselves too carelessly and I wonder if their use of computerized mass communication systems actually serves the greater good in the long run” (source). Yet, a graduate student in sociology in my Department, who recently completed my course on Cyberspace Ethnography, for which he produced this blog (Moving Online) devoted to research about the recent Greek riots and anarchist organizing online, does not seem to suggest that much was revealed in advance, that the conflicts with police happened and the role of the Internet was largely after-the-fact documentation/commemoration with photos and commentary. The case of Moldova’s “Twitter revolution” (see here and here), instead suggests that activities were recorded as they were being planned…and in any event, what kind of “revolution” was it, other than a marketing coup for Twitter? (One has to admit that among the cases where the Internet works against the system is with individuals — obviously not “team players” — who release sensitive information to Wikileaks, or who use the Internet as part of a growing mass of active copyright violators, or who develop software for free and just give it away, and it then competes with commercial software.)

Organizing resistance in the form of cells has not always been very effective either. Cells can be broken down. Informants within leak information either willingly, or carelessly. The idea that no leader of any cell knows the leader of any other cell does not seem to preclude the fact that higher ups know who the cell leaders are, and it is sometimes the higher ups who are the ones to worry about most. Any form of collective organization that entails great risks, asks us to trust our partners in the struggle. Yet in most cases I suspect that the only ones we can ever really feel safe about trusting are immediate family members, and friends we have known since our first days in school, if not earlier — people with whom we can communicate with eye movements and facial expressions because we know each other so well, so we can sense unease, uncertainty, wavering, loss of confidence, loss of interest, and so forth, signs that we might not perceive in those who are less familiar to us, therefore missing potentially serious possibilities for cleavage within an organization. Just imagine discussing the making and planting of explosives with someone you have known from a few meetings, or someone you have known for a few years and yet you cannot satisfactorily answer the question of just how well you really know that person.

In all of this what seems to be lost is the role of the single-cell, the single person in other words, engaged in acts of resistance that are either conscious or compulsive. No known ideology, no public persona as a movement, no meetings, no websites, and ideally no phone calls to claim responsibility, just utterly faceless and secretly executed. The thinking behind the personal, private, and secret acts of resistance may be inspired by others, suggestions may even be provided (I think of a “poster” made with permanent ink on the wall of a toilet stall that lists 10 different ways that you can wreak personal chaos), but there is no coordination, and therefore no cooptation, no betrayal, no leaks. If one is arrested, no one else loses, no movement suffers.

This is action that is below the radar, off the screen, and thus largely beyond ethnographic research as well. One can guess that the actions of a single-cell may be responsible for a certain outcome, after the fact. Nor is this an entirely speculative exercise, as I have known of workers who have demolished their places of work once they found a way of gaining entry at night using a security key left on a desk carelessly by a supervisor during a day shift: lights smashed by throwing chairs up at the ceiling, fire extinguishers emptied into hard drives, magnets passed along tapes of data, halon released on mainframes in raised-floor rooms, desks overturned, laptops stacked in a pile and demolished with a sledge hammer. I also knew of all doors locked with the keys broken off in the locks; fire hoses used to flood the upper floors of an office tower; and, all paper files put out in recycling and lost for good. Then there were acts such as sugar poured into the radiators of managers’ cars, potatoes jammed into exhaust pipes, daily acts of theft, vandalism of items on supermarket shelves, damage to public and private property of all kinds. Others have called police to a scene of a phony domestic dispute so as to slash the tires of the police cars or even set the cars alight as the police are inside an apartment building investigating — the list is endless, limited only by one’s imagination. None of the actions were driven by personal gain, none of them on their own “change the system,” and no government has fallen because of such acts. They may seem petty and trivial. They probably are, that is, until millions start doing similar acts, and the tally of their destruction mounts to unmanageable proportions. Unfortunately, the press cannot aid us in this inquiry, as they rarely document such acts, unless they are quite extraordinary. Some companies even refuse to involve the police, especially if the “secure” data of millions of customers was damaged or even erased, since the cost of the publicity would be even greater.

If we truly live in a time of kairos, is it smart to not grant more serious consideration to the workings of the single-cell, or should every form of change come with a flag, a symbol, speakers, and websites? Should the process of transformation require movements, or movements alone? Does collectivity require combination, and does solidarity require coordination? Does disciplined action not sell itself out to the system it opposes? Do we need to be “respectable” even in our rejections of the dominant order of respectability?

15 thoughts on “Single-Cell Resistance in the TimeSpace of Kairos”