The following article was published in Anthropology News (the newsletter of the American Anthropological Association) in its September 2005 issue, page 7. It has been submitted for reproduction on this blog by the author. The author is thanked for making this work openly accessible and for contributing to this project’s strong concern for the continued war of occupation of Afghanistan.

Forty years ago in a moving commentary that metaphorically identified US policy and conduct during the Vietnam War with a medicine man practicing exorcism, anthropologists Eric Wolf and Marshall Sahlins observed: “As we draw out the evil spirits by letting the blood of the victim we emerge covered with that blood. We shall have attempted to rid the land of demons only to become demons ourselves.” These observations published October, 13, 1965, as “The Tragedy of American Unreason,” in the University of Michigan’s student paper accurately capture the tragedy not only of the Vietnam War, but also today’s “War on Terror.”

Theories and speculations about terrorism and terrorists in general, their anti-American versions in particular, are produced at a dizzying rate without a meaningful pause for proper integration. One of the most popular of these theories is found in slogans President George W Bush regularly expatiates: Freedom is God’s gift to America and by extension to mankind. Terrorists hate America because America is free. When Afghans and Iraqis become free, they will become like America and consequently will not hate America. A recent popular alternative to this supernaturally inspired orientation is provided by University of Chicago political scientist Robert Pape.

Pape’s argument—which received extensive coverage and support among media pundits, politicians and policymakers—is built upon demographic numbers about terrorist acts that are stripped from their cultural, historical and ideological contexts. He also refers to a purported Internet document about al-Qaeda’s strategy for weakening international support for US military intervention in the Middle East and Central Asia. Pape argues that al-Qaeda’s strategy is designed “to compel the United States and its Western allies to withdraw combat forces from the Arabian Peninsula and other Muslim countries.” Thus, Pape implicitly offers a straightforward solution: if the US were to withdraw its military forces from Muslim countries, al-Qaeda attacks would diminish or even totally cease. This kind of mechanical outlook is consistent with the unproductive American obsession with simple, one-factor solutions for complex challenges—never asking, in the words of Wolf and Sahlins, “what is the matter, only who is the matter.”

What we need are analyses that expose the reciprocal organic complexity that exists between US policies and the ideological responses to them through forms of “terrorism.” I define terrorism as acts that inflict indiscriminate violence or impose the threat of violence and fear on non-combatant bystanders and unarmed citizens by state and nonstate actors. Often non-state actors reject the monopoly of the legitimate use of violence by states on political and moral grounds. In terms of this definition, there is, for example, no difference between Tim McVeigh of the Oklahoma City fame and the people who flew the planes into the New York towers and Pentagon, nor between these two events and state-conduct-inflicted violence in Dasht-e Laili, Fallujah, Haditha, Kosovo and the West Bank.

Obviously, as Pape implies, the removal of US forces from Afghanistan and Iraq will alter the degree and intensity of exposure of these forces to their attackers. But the removal of these forces will only change the timing, location and perhaps targets of terrorist incidents; it will not affect the motivation behind anti-American terrorism, nor the root causes of these motivations resting in ideological foundations, primarily opposition to secularism, often seen by some Muslims as a Western value.

A further flaw in Pape’s analysis is that when the attack on the New York towers took place there were no US troops in Afghanistan and Iraq, although in the eyes of many Middle Easterners, Palestine was under occupation with the support and blessing of the US, which had helped arm the occupier not only with massive amounts of up-to-date conventional weapons, but with hundreds of nuclear weapons. In fact, under current conditions for practical, strategic, and symbolic reasons, anti-American armed resistance would prefer the US military presence on its home turf in Afghanistan and Iraq. However, for anti-American terrorism to recede and hopefully disappear, radical changes must take place in the foreign policies and conduct of the US government. Using or removing military force in one locale as the first and only solution to a profoundly complex challenge amounts to, borrowing again from Wolf and Sahlins, a “gimmick … no more, no less; what is required of us is a much greater exercise of the imagination.”

It is important to also ethnographically understand that “suicide terrorism” in the eyes of many Middle Easterners is “sacrifice terrorism.” Indeed, it could be argued that Islam prohibits suicide (intehar in Arabic [and other Middle Eastern, Central and South Asian languages], and khod koshi in Farsi). The Qur’an contains no specific and clear-cut prohibition of suicide. The injunction is largely based on several hadiths, traditions derived in part from the renditions and interpretations of the sayings and behavior of Prophet Muhammad. A Muslim who resists the occupation of his country by using his body as a delivery system for inflicting harm on the enemy and its local collaborators is viewed by his peers as fedayee (Arabic, from the noun fida, sacrifice, redemption) or fedakar (Farsi), one who sacrifices himself or offers his life for or in the name of something higher than self. A fedayee or fedakar does not take his life in this cultural logic, he gives or surrenders his life; he does not commit suicide in the Western sense, he commits sacrifice.

The fedayee or fedakar, and the community that produces and support him, believe that by sacrificing his life, he serves something larger and more important than himself—his culture and community—and becomes a shaheed (Arabic, martyr), a position of honor and heroism in local culture and a status that in the next life guarantees a place in paradise and engenders special privileges, including access to virtuous women. In Afghanistan, the grave of every known Taleb and al-Qaeda fighter who died in battle, especially against the American invaders, has already become the object of pilgrimage by the locals. The sacrifice bombers of Afghanistan, Iraq and Palestine leave behind similar cultural inheritance.

More on the al-Qaeda cemeteries: 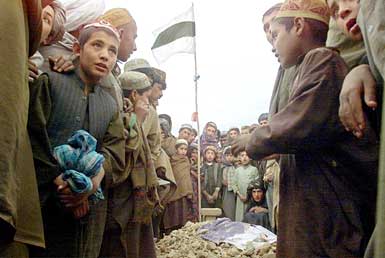 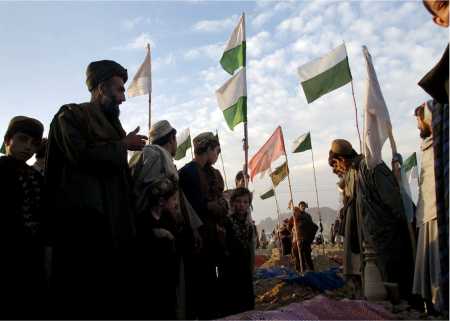 Return to Afghanistan
At the al-Qa’ida Cemetery, People Kiss the Earth Above the Honoured Dead
COUNTERPUNCH
Robert Fisk
19 August 2002

Dr. M. Jamil Hanifi is currently an independent scholar whose long standing research interests focus on the anthropology and history of Afghanistan. He is himself an Afghan, born in Sorkhab, Logar Province. He obtained his Ph.D in Anthropology from Southern Illinois University-Carbondale, in 1969. He earned his M.A. in Political Science, from Michigan State University, in 1962. He graduated with a B.Sc. in Social Science, from Michigan State University, in 1960. Dr. Hanifi is also fluent in Farsi/Dari, and Paxtu. He also has reading ability in Arabic, Russian, Tajiki (in Cyrillic), and Urdu. He teaches part time in anthropology at Michigan State University and Lansing Community College. He was formerly a Professor in the Department of Anthropology at Northern Illinois University, from 1969 to 1982. Dr. Hanifi’s research has been partially supported by the United States National Academy of Sciences, the National Endowment for the Humanities, and the American Institute for Afghanistan Studies, in the period from 1982 to 2006. He is also the author of the Historical and Cultural Dictionary of Afghanistan (1976) and numerous articles in journals and encyclopedias. You can read more about Dr. Hanifi here, here, and see his Anthropology of Afghanistan group page.