There are those trainers who are not attached to either UNO or the University of Kansas as faculty. 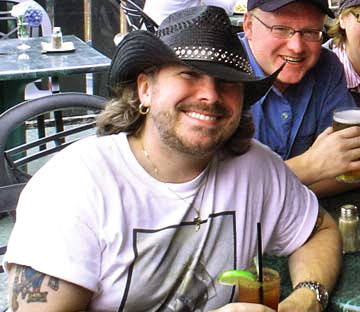 One of these, someone who for a while was a student in my department (before I arrived), is Dr. Liam D. Murphy, an anthropologist at California State University-Sacramento, who by his own admission worked as a trainer for HTS. Murphy traveled to Fort Leavenworth at least three times to train program participants in ethnographic research methods. He actively supports HTS politically, inviting Montgomery McFate, a friend of his, to address a local conference of the Southwestern Anthropological Association as a keynote speaker, dismissing objections to his choice, and defending her as a great speaker despite opinions that were very much to the contrary (source). Murphy has still not disclosed details of his contract with HTS, the exact nature of his duties, and how much he got paid.

In an article by David Glenn in the Chronicle of Higher Education, Liam Murphy claimed that he was prepared to act as “a whistle-blower” if he ever detected serious problems with HTS. Given that there have been over 60 such whistle-blowers to get in touch with John Stanton, three who have corresponded with me (of all people) by e-mail, and one damning, detailed critique by John Allison, one has to wonder why Murphy has since been so silent (source). Perhaps his ethics have gone AWOL along with his credibility.

Britt Damon is formally listed as “HTS, TRADOC”, one of the academics who also served time on a HTT in Afghanistan, now serving as HTS staff back at Fort Leavenworth, while getting a degree in anthropology at the University of Kansas. Britt Damon in 2002 was an Army reservist assigned to guard detainees at the Guantánamo Bay Naval Station (see: “Anthropologists in a War Zone: Scholars Debate Their Role.” By David Glenn, Chronicle of Higher Education, 11/30/2007, Vol. 54, Issue 14). Damon then entered HTS, and now works at Fort Leavenworth, according to Glenn, “as a civilian contractor recruiting and training members of the Human Terrain Teams. His employer is BAE Systems, an aerospace company that holds a major contract to support the Human Terrain System.” Damon recently contributed to a workshop at the University of Montana titled, “Defense Critical Language/Culture Workshop,” and the title of his presentation was “Helping the Command Determine What They Need to Know and What They Don’t Know They Need to Know.” He has also been a participant in joint military-academic roundtables that have involved HTS and members of the anthropology department at the University of Kansas.

When Britt Damon was in Afghanistan serving as a “cultural analyst” for the 82nd Airborne Division, he was a member of the first Human Terrain Team assigned there, along with Tracy St. Benoit, Capt. Roya Sharifsoltani, and Major Robert Holbert (source1, source2).

(In the photo above, “Sgt. Britt Damon points out features in a book as he interacts with local children during a cordon and search conducted with the Afghan National Police in Nani, Afghanistan, on June 3, 2007. Damon is with the Army’s Human Terrain Team, 4th Brigade Combat Team. DoD photo by Staff Sgt. Michael L. Casteel, U.S. Army.”)

You can watch a brief video interview with Britt Damon here.

Last in this list, and the one about whom I have found the least information, is Dr./Major Michael Duane Weltsch, (born 25 June, 1952, in Fort Riley, Kansas) Human Terrain System Reachback Center, who has a Ph.D in adult, occupational and continuing education. He is an adjunct at the University of Mary, in Kansas City, Missouri. He has a B.S. from the United States Naval Academy, a M.M.A.S. (MA in Military Arts and Sciences) from the US Army Command and General Staff College, Fort Leavenworth, Kansas, and a Ph.D. from Kansas State University (“A Study of Community College Presidential Qualifications and Career Paths”), defended in 2009. He previously served as the Executive Assistant to the President for Planning, Organizational Development and Military Programs at Barton County Community College. He is currently listed as “Senior Social Scientist, Afghan Research Reachback Center” (U.S. Army Human Terrain System, 731 McClellan Avenue, Building 48, Fort Leavenworth, Kansas 66027, Cell: (785) 317-5000, Business: (913) 684-3863/3941, Jolvz092c@jricp.osis.gov).

On the US Army and US Marine Corps Counterinsurgency Blog (http://usacac.army.mil/blog/blogs/coin/archive/2010/02/04/coin-so-sfa-sitrep-february-2010.aspx) there was an announcement of a COIN [counterinsurgency] Brownbag Webcast, titled “Pashtun Society in Eastern Afghanistan,” and delivered on 29 January 2010. The COIN Center hosted web-cast featured “Dr. Michael Weltsch, Human Terrain System.” The purpose of the briefing was “to provide analysis of Pashtun society in areas of eastern Afghanistan to aid development of COIN  policy. Research widely supported by Afghan scholars is that Eastern Pashtuns’ motivations for supporting either Afghan government or the insurgency are flexible and pragmatic. Tribe is only one potential choice of identity among many, and not necessarily the one that guides people’s decision making.” The site identified as the next step, “continue collaboration with Dr. Weltsch and HTS for COIN symposiums and other education opportunities.”

It is not clear if Weltsch has been actively involved in the HTS training program, or if his work is entirely on the analysis side.

Patriotism and the Lack of Research Imagination: The Invention of “Adversary Cultures”

Previously, in part one, I mentioned Bart Dean at the University of Kansas, and a paper he co-published with First Lieutenant Charles K. Bartles and Sergeant First Class Timothy B. Berger. In that paper, while trying to reduce critics to a narrow zone of simplistic thinking, the following passage is offered (most likely written by Dean himself):

Anthropologically speaking, those in the US who argue for a “purist” discipline reflect not only a peculiarly “American” innocence regarding the conflictual nature of the world, but more importantly, a methodological “straight jacket” which pre-empts the understanding of power in its various manifestations in the actual, lived world, which unfortunately does not fit cozily with the binary ethics–good/evil–regnant in the US academy, not to mention popular media coverage on the ethics of anthropological engagement with the military (Canon 2007).

It is a nest of contradictions, oversights, and obvious omissions. To begin, the “peculiarly ‘American’ innocence” of the world is one that holds America to be good and true, one mired in a firmly entrenched disavowal of the U.S. as imperialist. Given that there is no reflection on that fact, and no recognition of it either, while in fact dismissing Roberto González’s criticisms of the failure of those who “ignore the broader context of U.S. imperial power,” as “naïve, overly reductive and seemingly ‘reactive’,” then clearly Dean is possessed of this very same naive innocence.

Dean then talks about not wanting to be constrained by a “methodological straight jacket,” the need to “understand power in its various manifestations in the actual, lived world,” and getting beyond binary ethics of “good/evil.” Fine. If we hold him to his words, and believe him to be serious, then why does Dean only advocate for serving the U.S. military? The very same statements he makes could just as easily be offered in support of anthropologists siding and working with the Taliban and Al Qaeda. Look at them again. Prove me wrong. The question then is: why doesn’t he offer support for this option, or even mention it as an option? This is where the unspoken, taken-for-granted truisms of imperial patriotism come into play…and this from someone in a discipline that boasts to first year anthropology students, in their very first class in anthropology, that ours is a discipline that challenges the taken-for-granted nature of our cultural assumptions. Easier said than done, apparently.

Most ironic then, not to mention preposterous, is that Dean and his coauthors speak critically of “defying the gray zones of social life,” thus challenging  “a Manichaean view” that “is innocent.” Again, if he actually believed his own words, or understood them, his tract should have endorsed and even urged anthropologists to look for ways of aiding the “insurgency” (that innocent American way of denying their own presence in Afghanistan as an occupation, which would then mandate calling “adversaries” the resistance).

If it is anti-Manicheanism we want, Dean would have served his innocent public better by expounding on why labeling as “terrorist” the Taliban and other resistance movements in Afghanistan is so problematic. He could then refer to studies, using the U.S.’ own legal definitions of terrorism, and international conventions and jurisprudence, along with case histories, to explain how it can be that the U.S. is the world’s leading terrorist power, and then contrast that with official and media caricatures of the (counter)terrorists on the other side (see here, here, here, and here, for a start). As one correspondent jokingly summed it up: “the terrorist is the one with the small bomb.” So why is Dean’s critique of Manicheanism so one-sided? Because it is Manichaean.

It’s not that Felix Moos improves matters, at all. In his own paper, the sophisticated, nuanced, and anthropologically complex observation he offers us is: “Like death and taxes, warfare has become a fact of life in the 21st Century” (p. 3). So how does Moos bring anthropology to bear on this? He doesn’t. Instead, as usual, he merely recites Clausewitz (!). Unfortunately, as noted by John Gledhill, “Professor Moos himself responds to most expressions of doubt by repeating the litany that ‘we’ are ‘at war’.” Complex? Nuanced? A grey zone?

To the extent that there is (not) a Manichean world–and people really ought to be more honest and credit Frantz Fanon for this discussion–it is certainly one constructed as such when the likes of Montgomery McFate can so easily speak of “adversary cultures,” which are always the cultures of the Others. It is no wonder that the American Anthropological Association has denounced this as not a legitimate exercise in professional anthropology–which, finally, after five months of delay, will be the subject of my next posts.