In a military-dominated culture, where the militarist ethos tries to reach into every little corner of social experience and attempts to appropriate every possible making of cultural meaning, this is the latest for our files: Team USA at the 2010 FIFA World Cup in South Africa was apparently unable to think of motivation, discipline, and bonding outside of the military experience. Apparently in the U.S. these qualities have become monopolized by the military, and by militainment propaganda.

“We had Dan Jollota, who came in and talked about the way he represented our country — people might know him. [He’s the  helicopter pilot from] Black Hawk Down. So we’ve done some things to make sure that everybody understands the responsibility of representing the United States and the honor.”

Elsewhere, it was reported that Bradley called in Jollota who “gave the footballers a lecture in bravery and team work, passing on the US soldier’s motto of ‘no man gets left behind’.” Bravery? Team work? Are these now unthinkable without assistance from the military? And how exactly does “no man gets left behind” apply on the football pitch? One must wonder what manner of over-constructed delusion about football is at play here. (See also: “No Man Gets Left Behind,” The Mirror (UK), 09 June 2010).

In the lead up to yesterday’s match against England, Team USA player Clint Dempsey credited Dan Jollota for having “given the squad a special edge.”

“Recalling lessons from of one of the US’s biggest battles since the Vietnam War back in 1993, Jollota has helped mould Bradley’s men into a unit who look after each other on the sporting field of battle.” (source)

Indeed, how could anyone miss the obvious parallels between a war zone in Somalia and a football match. No wonder that Team USA goalkeeper, Tim Howard, seemed to continue screaming at himself long after allowing England to score…he possibly thought his mistake cost the lives of several brave men in uniform. The man was almost hysterical with rage.

“Like we had one of the pilots from Blackhawk Down come in to speak. The speakers helped us with team bonding. They brought into reality from their experiences about coming together for one team’s goal and putting personal glory aside. It is about the team. To do the best that is what you need – everyone on the same page.”

At least one single writer has made some observation of the military overkill in U.S. sports ethos, with reference to this case:

“After listening to a man who has been through that [Black Hawk Down], the U.S. team probably felt like ripping the sleeves off their shirts and running all the way to South Africa while screaming until their lungs were raw.” (“U.S. motivated by ‘Black Hawk Down’ pilot, new catchphrase,” Brooks Peck, Associated Press, 09 June 2010.)

Of course this is not a the only time that Dan Jollota has been praised for his inspiration by a sports team, as in the case of this flyer being honoured by the Philadelphia Flyers: 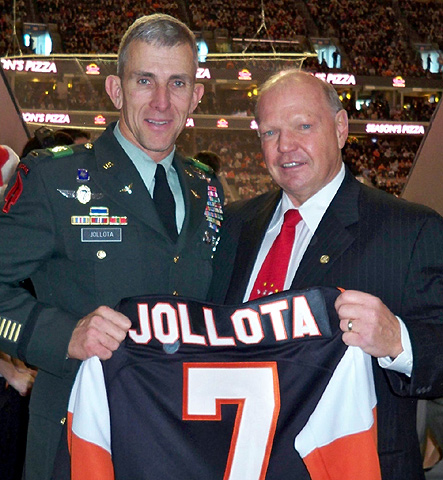 The Philadelphia Flyers honored Blackhawk Pilot Commander Dan Jollota of the United States Army as a “Flyers Community Teammate” during the second period of their game against the Pittsburgh Penguins today.

For over 33 years, Commander Jollota has been enlisted in the United States Army. In 1993, he was a pilot in one of the biggest battles for U.S. troops since the Vietnam War. He flew U.S. aircrafts into Somalia for search and rescue missions. The mission was adapted into the film Blackhawk Down and highlighted their courageous efforts to save the lives of U.S. soldiers and preserve their motto that no man gets left behind. Commander Jollota’s service has achieved him awards such as The Bronze Star Medal and the Distinguished Flying Cross.

Jollotta met Flyers Head Coach John Stevens during the team’s excursion to West Point in early October, and visited the locker room after the 6-3 win.

Fans joined Flyers Ambassador of Hockey Bob “The Hound” Kelly, who presented Commander Jollota with a personalized Flyers jersey in honor of his courage and dedication in defending our country.

If it was not so sad, to the point of being a pathology, it would almost be funny to think that some people are unable to think of play, and of community, apart from mechanized military killing and foreign invasions.

9 thoughts on “Team USA at the 2010 FIFA World Cup: Motivation Unthinkable without the Military”