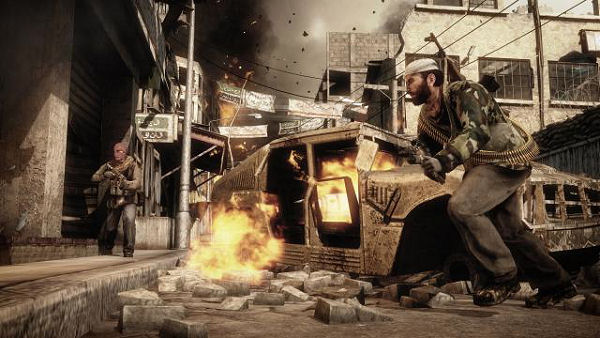 A Medal of Honor for Imperialism: But don't look at this image! A digital transfer of Taleban contagion will begin downloading if you do.

In the latest in militainment news, Electronic Arts has bowed to pressure from military officials in the U.S. and UK–not that it wasn’t already predisposed to their sentiments–and to the overreaching complaints of family members of those who died killing Afghans, and removed mention of the Taleban from the upcoming release of “Medal of Honor.” Players can now play as part of “Opposing Force” rather than “Taliban.” Had EA not made the change, the game faced outright banning: British Secretary of State for Defence Liam Fox called for retail stores to ban the game, and it was to be banned on U.S. bases, even though U.S. military personnel participated as consultants and testers to make it “more respectful” of their side, and of course, “accurate.” The only accuracy achieved is that, as in our mainstream media, the other is suppressed, and colonial disrespect is officially permitted and encouraged.

Being quite clear about the militarist propaganda functions of Medal of Honour, the executive producer Greg Goodrich stated: “the heartbeat of ‘Medal of Honor’ has always resided in the reverence for American and Allied soldiers.”  Not just respect, rather reverence. Reverence, as in adoration, deification, genuflection, worship, and religiousness. Goodrich, speaking of the complaints, said: “This is a voice that has earned the right to be listened to.” Apparently listening to these voices is required of all us, but more than that, strict obedience to those voices, so that no competing images can be seen. The assumption seems to be that where there are competing images and labels, there are competing sentiments, and that needs to be shut down.

It’s not the war that is offensive; it’s not the killing of Afghans in their own country; and it’s not the marshaled rage against those who dare to fight back and defend their home that bothers the militarists, the indoctrinated, and those bleating families who would rather not think about the real reasons why their camouflaged spawn were sacrificed by the state. No, what’s really offensive is that not even in the imagination should any players, in any part of the world, be allowed for a moment to walk in the shoes of the Taleban. Why not? Because the fear is that in reality we might take a side other than the authorized one–Goodrich ends his patriotic spew with this sugary nonsense:

“To all who serve – we appreciate you, we thank you, and we do not take you for granted. And to the Soldiers, Sailors, Airmen and Marines currently serving overseas, stay safe and come home soon.”

Apparently, the Taleban do not have families, and so the foreign invaders and occupiers need not bother with showing any sensitivity to Afghan families of the fallen. Once again, the video and the actual merge since this is no longer about playing but about training.

If anyone wishes to challenge the function of this game in training users to think like American militarists and war mongers–one can note that on the website of EA, only one single complaint was posted in what is apparently the only surviving thread (a user mentions that others were deleted). EA forum administrators would also like to hide from view any impression that there was debate, dissent, and complaints from other angles. The lone critic stated: “Glorifying war is disgusting. Glorifying only the parts of war fit to be sold is even more sick” and wondered if friends and families of the Taleban had contacted EA to express concern over the apparent lack of sensitivity toward them. Still having difficulty in spotting how military and commercial interests ideologically collude to censor and indoctrinate the young? Have a look at the responses, at how “community” pressure is mounted to sanction different views: knee jerk resorts to 9/11 sanctimony, and a flood of LMAO, GET A LIFE, STUPID THREAD image bombs. Not allowed for discussion.

It seems that the never ending 9/11 commemoration can only exercise a weak grasp on the minds of the young, which are also to be feared, as they may drift into the wrong intellectual neighborhoods, get lost, and perhaps never return. No wonder anthropologists had to be recruited for the Human Terrain System and other military programs–lest they become a domestic voice for the other, lest they question and criticize. This is war, and in war there can be no democracy. The totalitarian impulse of the “families of the fallen” required more than respect: it was not enough that they are free not to play the game, they want to ensure that no one else has the freedom to play the Taleban. For all of the insemination of the official state religion, the repetitive preaching of 9/11, none of it is enough. Now we are told that the Taleban have a slick and sophisticated propaganda effort–because they have a website, and a near dead YouTube channel, and oh my god Twitter and Facebook buttons! (We will take up the latter issue in the upcoming Encircling Empire report.)

In many video games one can still play in the role of Nazis. Correction: in all video games, it seems all we are allowed is to play the Nazi.

28 thoughts on “Are You Afraid of the Digital Taleban?”