From Cultures of Resistance 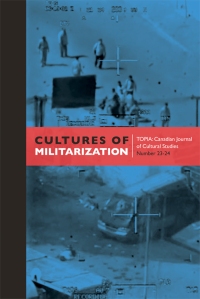 NEW BOOK RELEASE: Toronto, October 25, 2010 – A new book from the editors of TOPIA: Canadian Journal of Cultural Studies adds perspective to the rampant militarization of everyday civilian culture. Cultures of Militarization shows how a jarring combination of spectacle and secrecy enables the post-9/11 security complex to shape public feelings, opinions and fears.

This month, the public media group WikiLeaks released classified military documents that reveal a much higher Iraqi civilian death toll than previously acknowledged. Since the U.S.-led invasion of Iraq began in 2003, there have been 15,000 previously unreported deaths and many uninvestigated acts of torture. WikiLeaks has promised more disclosures about the war in Afghanistan. Meanwhile, U.S. military operatives face military proceedings—not for atrocities or misinformation, but for participating in earlier leakages of classified documents.

While civilian deaths and acts of torture have remained invisible and secret, it is impossible to miss the spectacular images of invasion and imprisonment that circulate the world on television, the Internet and the video game screen.  This mixture of secrecy and spectacle was recently rehearsed in the streets of Toronto, where unprecedented security measures surrounding the G20 summit became the subject of at least three public inquiries.

The culture of war is both hidden and widespread. The Pentagon’s “black box,” or classified budget for research and acquisition of information development, has increased 78 per cent since 2001, totaling $34 billion in 2009. The Canadian military, hungry for bigger and better war machines, defends its decision to spend $9 billion on F35 fighter planes while remaining silent on questions regarding technical and military justification.

This widespread increase in militarization does not just affect war zones: in the town of Glace Bay, Nova Scotia, a debate rages about the naming of a new school after Jimmy MacNeil, a Canadian soldier killed in Afghanistan in July, 2010. From coast to coast, yellow ribbons adorn trees and lampposts, while in Ontario, Highway 401 is now known as the Highway of Heroes. From fighter jets to highways to schools—military culture is everywhere. As the Cultures of Militarization researchers show, the unprecedented spread of militarism reaches deep into civic culture, where it affects government, families, media technologies, entertainment, public policy and personal beliefs. Ultimately, we are all living the consequences of global militarization.

Cultures of Militarization, edited by Jody Berland (York University) and Blake Fitzpatrick (Ryerson University), features contributions from twenty-two international scholars and artists whose work investigates the processes through which military presence is normalized or critiqued in private, public and national narratives. Exploring yellow ribbons and robotics, civilian surveillance and war art, these reflections on the relationship between militarism and civic culture are deeply revealing. No collection can summarize militarism into a finite set of conceptual terms, but Cultures of Militarization brings to light the broad, insidious role that militarization plays in daily life.

Cultures of Militarization (Cape Breton University Press) will be in bookstores November, 2010.

For further information on Cultures of Militarization, please contact the editors:

A.L. McCready
Tie a Yellow Ribbon ‘Round Public Discourse, National Identity and the War: Neoliberal Militarization and the Yellow Ribbon Campaign in Canada

Howard Fremeth
Searching for the Militarization of Canadian Culture: The Rise of a Military-Cultural Memory Network

Uli Linke
Fortress Europe: Globalization, Militarization and the Policing of the Interior Borderland

Neil Balan
Corrective for Cultural Studies: Beyond the Militarization Thesis to the New Military Intelligence

Susan Cahill
Conflicting Narratives: Representations of War in “The Battleground Project” and the Performative Potential of its Audience

Marc Lafleur
Tracing the Absent-Present of Hiroshima and Nagasaki in America as Sensuous Encounter: Notes on (Nuclear) Ruins

David Clearwater
Living in a Militarized Culture: War, Games and the Experience of U.S. Empire

James R. Compton
Fear and Spectacle on the Planet of Slums

Jim Daems
“i wish war wud fuck off:” bill bissett’s Critique of the Military-Cultural Complex”

Darin Barney
Miserable Priests and Ordinary Cowards: On Being a Professor

2 thoughts on “Cultures of Militarization: In Canada and Beyond”