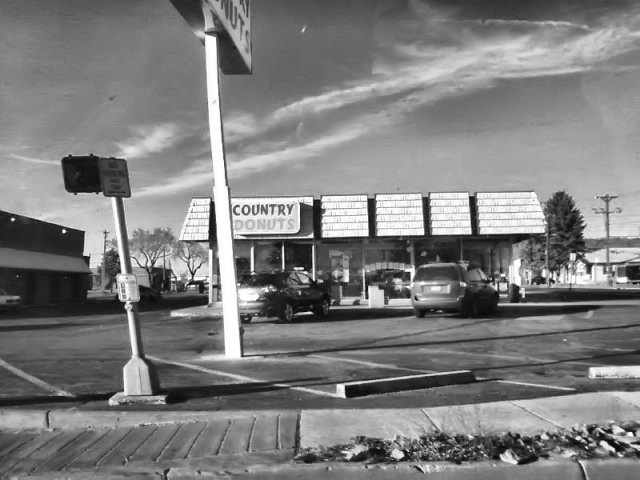 This is the first time that I am writing about a subject that has occupied my thoughts numerous times over many years. I have talked with a doctoral student (a filmmaker with years of experience following the lives of “homeless” persons in Toronto) about maybe teaming up to capture bleakness on film, at least that which can be visually captured. He understood very well the presence–the smell, the taste, the sound, the look and the feel–of bleakness. We both agreed that whatever bleakness is, it is not squalor. Bleakness is to be found in the shadow of wealth, urban development, and (post)industrialization. Squalor is marked by destitution, wretchedness, and impoverishment. Bleakness is the blight of urban North America as squalor is the blight of the “underdeveloped” locales of the world. Bleakness mattered so much to me that I think it was a large part of what first impelled me to abandon Toronto, and to leave Canada. 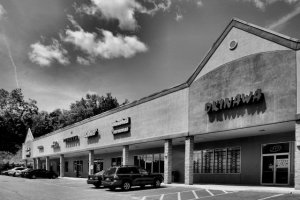 Bleakness is something that can be seen. Large grid-like expanses of warehouses, shopping malls accessible only by highway, strip malls in suburban neighbourhoods, lonely doughnut shops in areas where no one seems to live and they are open all night long even though nobody seems to go to them. Bleakness can be seen in the large, red, abraded arms of the night security guard with his long sideburns and the puffy bags under his eyes. Bleakness is in the story he tells: “I once had my own business.” Oh yeah, what was that? “I sold comic books, pogs, and hockey cards. It went under.” Bleakness is in the restaurant with the red velvet wallpaper, the brownish yellow glasses with the bubbled surface, the candle inside a glass globe covered by red plastic netting, and the brown carpet. You can see bleakness in the orange juice stains at the corners of the mouths of tired looking kids lining up for the morning school bus. When I was growing up bleakness was Kodiak boots, jeans, the red and black flannel shirts, and the t-shirt that said “AC/DC.” Not to mention the banana yellow Gremlins with some hockey-stick stripes on the side, and peppermint-coloured Pintos. That’s the thing, there can even be bleak colours–perfectly good colours, that have somehow been killed, like the weepy plastic blue of Pan-Am and the red of TWA that looks like the colour of stale candy given to you by an old lady with blue hair. Bleak for me was also the sight of the name of another, now long defunct, Canadian airline: “Wardair.” Ward…air? Please, don’t tell me it was named after some guy called “Ward,” that would be too bleak. Ok, Ward was his last name. Where else can you see bleakness? In finished basements in suburban homes, with the padded fake leather bar, the plaid couch, the dart board, and the mounted fish. Bleakness in department stores, with sales ladies that look like wildly painted dinosaurs, and the blank stares eating onion rings in their fabulous in-store restaurant.

Bleakness can have a taste, especially where there is limited choice and the imagination is stifled. To me it had the taste (and smell) of french fries with white vinegar, boiled hotdogs, and anything made with marshmallows. Instant gravy, powdered mash potatoes, Velveeta cheese, Spam, and bright yellow French’s mustard. And corn relish. And ketchup-flavoured potato chips, Cplus orange soda, spearmint gum, and fun dip powdered candy with candy stick. Menthol cigarettes. Molson Canadian. By the 1980s the new popular bleak taste was that of Caesar salad.

The feel of bleakness is not something that stands out for me, probably because it is the most persistent and widespread that I take it for granted, and possibly because I pay more attention to sight, taste, and sound (often in that order). What does stick out is the feel of polyester, and styrofoam food containers, and the corrugated plastic coffee cups one would get from vending machines down some old hallway, serving over-heated coffee that tasted like burnt skunk fur.

Bleakness certainly smelled; in fact, it pretty well stank. Bleakness smelled like those french fries with the white vinegar; an apartment smelling of dirty carpet; apartment building corridors that smell like people are heating canned stew (which smells like dog food); the smell of piss and dog shit in the parking lot where kids traded those hockey cards; and, the blue-haired old lady whose Avon perfume smells like syrup mixed with dust.

The sounds of bleakness are too many to list. They can range from the sound of “Captain of Her Heart” (or “Don’t Stop Believing“) playing every 20 minutes in that nowhere doughnut shop in the middle of a warehouse district at 3:30am, where you sit with that bland coffee and the doughnut with sprinkles on it, wondering: “What the fuck am I doing here? God, take me now.” Bleakness can sound like the Doppler shift of a lonely truck late at night on that 16-lane highway next to which you live. Bleak sound fills the suburban supermarkets, piped music, announcements, price checks–something combining the sounds of a prison, elevator, and airport departure lounge. I have never been in a supermarket that didn’t make me feel like I had a lucky escape each time I exited. Let’s not forget: the hollow sounds of a hockey arena during practice and the mother shouting, “Atta boy Gordie!”

For me the 1970s seem to have been a special time for bleakness. By the 1980s its bleakness started to become dulled by that nouveau yuppie blend of brass railing, green marble, and potted ferns. The only Hollywood movie that for me captured the essence of bleakness was Boogie Nights (revised: one of several).  Bleakness changes, but it becomes most striking at the point of alienation. After that, present bleakness becomes a blur–car models that are now indistinguishable from one another, blocks of people filing into buses and the first thing they do is take out their little gadgets, busy little thumbs scrolling away at a plastic screen, same empty looks, people who are terrified to be alone with their thoughts, needing to fill in the emptiness with all sorts of gadgetry, pixels, and digital signals. A much livelier take on present-day bleakness comes in the music video below, commenting on consumption and family relationships in suburban settings. I found it quite by accident, and went ahead and watched it even though I thought it would be an advertisement for a vacuum cleaner (raised in bleakness, old habits die hard). “Enjoy” (which is also what the bleak waitress says serving Caesar salad in that bleak roadside-restaurant that has been made to look–for who knows what reason–like a bad replica of a medieval castle).