“The challenge for anthropologists is to discover without killing.”

“With notebooks and pens we will end suicide bombings and gore. Sensitivity to backward culture will help us to control the horror. They’ll learn love for American freedom through stories they’ll come to adore.”

“Anthropology will help to explain the people we wish to contain. We’ll win hearts and minds behind enemy lines by mapping the human terrain.”

“We’ll identify those we can trust to embrace the occupation. We’ll remove all the others….”

“With social science to lead us, through dark Afghanistan, we’ll blaze a path toward victory, and eventually into Iran!”–words from the song, Shadow Anthropology, see below. 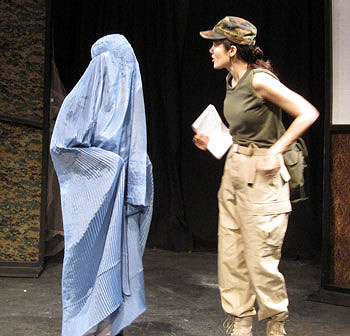 Dr. Rick Mitchell, is a professor and creative writing advisor in the Department of English at California State University, Northridge who, with the support of his university’s Faculty Research Fellows Program and the Puffin Foundation, has created and launched a play that is getting a number of positive reviews: Shadow Anthropology–A Post 9/11 Comedy. This has been mentioned in previous articles that we have published, as an upcoming production. One review from Eye Spy LA tells us that “Mitchell weaves a complex story about U.S. colonization into an enjoyable, comedic romp,” one that uses “almost every form of dramatic spectacle with Turkish shadow puppets, catchy musical numbers and light Brechian flourishes.” In this play, the U.S. Army’s Human Terrain System, and the work of militarized anthropology are targets of criticism. We are told that “the play is critical of U.S. occupation strategies that are intended to reduce conflict, but only fuel it through ignorance.” As for HTS another review tells us that it is, “touted as a way to win hearts and minds…a devious attempt to root out insurgents through entrapment.” HTS is also referred to in one of the reviews as, “an underhanded American ploy to colonize and ferret out insurgents.”

To clarify the aims of Rick Mitchell’s project I asked him to what extent HTS was intended as a focal element, if it was. He explained that “HTS is certainly a big element, but the play also focuses on broader areas, i.e., the (ugly) US occupation of Afghanistan (and, to a lesser degree, of Puerto Rico [the anthropologist is from Vieques]), the stereotyping (and necessity) of ‘enemies,’ the drug-war connection in US warfare (and espionage), the ‘occupation’ of women exacerbated by Sharia Law, etc.” The main point is that, in Mitchell’s words, “the piece is adamantly against occupation of any kind.”

One of the HTS characters, on a Human Terrain Team, is a former Marine, Evan–described by one review as a “trigger-happy coked out junkie;” in another review in LA Weekly as “a well-paid defense operative…an unprincipled superpatriot whose sprawling ego is pumped up by his coke-and-heroin habit and his steady intake of Viagra. A practiced slimeball;” and, in a review by the Levantine Cultural Center as someone who, “shadows the Afghan population to gain insight, while remaining in relative darkness.” The other team member, Fe, is supposedly a left-leaning Puerto Rican anthropologist, “with sincere intentions for the use of anthropology,” described in another review as “unwitting.”

I asked Rick Mitchell what his main sources of information/inspiration were in creating the HTS characters, Fe the anthropologist and Evan the soldier of fortune:

I did a ton of research, not only about the HTS, but also about Islam, Afghanistan’s history, the US military, BlackWater, mercenaries, extremisms (of the Islamic, X-tian, and Free Market variety [Tariq Ali’s The Clash of Fundamentalisms was useful here] etc., etc. Of course, a couple of early, major leaders (of the HTS and a private mercenary co.) were on my mind when I began writing. But that changed a lot as the play developed and the characters began going in different directions.

Evan works for a firm that in the play is called SwampWater, and while not modeled on any one person, nor a composite of specific persons in existence, his creation by Mitchell was influenced by some of the books he has read “about the kind of guys who were working as private contractors in Iraq and Afghanistan (and by the Fundamentalist right-wing in the US).”

Rick Mitchell’s next stop is at the South Asia Center at University of Pennsylvania, in Philadelphia, to present a reading of the play on Feb. 18 at the following conference: Popular Culture and Alternate Histories: Voices from Beyond the Security State in Pakistan, Afghanistan, and Central Asia.

With parody videos, critical books, online critiques, and this play, one is forced to reject one of the central premises in the sales pitch delivered by the Human Terrain System early on: that it would help to make anthropology useful and relevant, and presumably, respected.

I am currently reading through the 130+ pages of the play and a follow-up article may come in the future. In the meantime, below is the song of the play, with lyrics by Rick Mitchell, music by Max Kinberg, and vocals by David Lee Garver:

[Photos by the Son of Semele Theater]

One thought on “Shadow Anthropology”