“The United States will continue to be a friend and partner to Egypt. We stand ready to provide whatever assistance is necessary and asked for to pursue a credible transition to a democracy.” —Barack Obama, speech on Friday, 11 February 2011, on the resignation of Hosni Mubarak

Finally, Mubarak is out. But the U.S. is still very much in, for now. Are we seeing, in Egypt, a novel American mode of intervention? Are we seeing evidence of what we might call the (Hillary) Clinton Doctrine? The U.S. government is certainly not speaking as if it has suffered a major loss. If anything, it sounds like it has plans for the future of the Egypt.

Numerous observers, even in the American mainstream media, have painted a picture of a “shifting,” ambiguous, ambivalent, often contradictory set of U.S. government narratives about the Egyptian revolution, since just days after the 25 January protests began. Their observations are not flawed. But one caution is very necessary: when we encounter people that we know are smart and astute, the best way to underestimate them and miscalculate their moves is to assume that they have become suddenly dumb when offering seemingly contradictory statements. The objective ought to be to search for the deeper logic that unifies seemingly opposed parts of the narrative into a working whole. In doing so, we will find what is evidence of what I think we can call the Clinton Doctrine, and evidence of its momentary success in Egypt.

It deserves to be called the Clinton Doctrine since U.S. Secretary of State Hillary Clinton has been the author of several related foreign policy initiatives, which we can group under the banner of “21st Century Statecraft,” while Obama has really done nothing to be distinguished as a unique “foreign policy president.”

The (Hillary) Clinton Doctrine thus far does not exist officially, written up as a widely acknowledged policy. It should be, because as mentioned before it is a relatively novel approach, one that is much more insidious and yet appropriate to a weakened and recessionary empire. Simply put, the Clinton Doctrine involves hedging U.S. bets by keeping a foot in almost all camps, by maintaining contact with diverse sectors in a society critical to U.S. national security interests, emphasizing “stability” when regime survival seems possible, and then emphasizing “orderly transition” when change seems probable. It is a mixture of realism and opportunism and a desire to intervene without being seen to intervene, a low cost foreign policy that builds on established bases of military aid and support for civil society groups. By maintaining open and positive channels of communication (with Mubarak, the military, the April 6 Movement, El Baradei, and even the Muslim Brotherhood [long a working ally of the U.S.]) the U.S. made sure that no matter what resulted, it would remain in the picture as a continued player of importance. Viewed in this light, there is nothing contradictory about U.S. statements on Egypt. 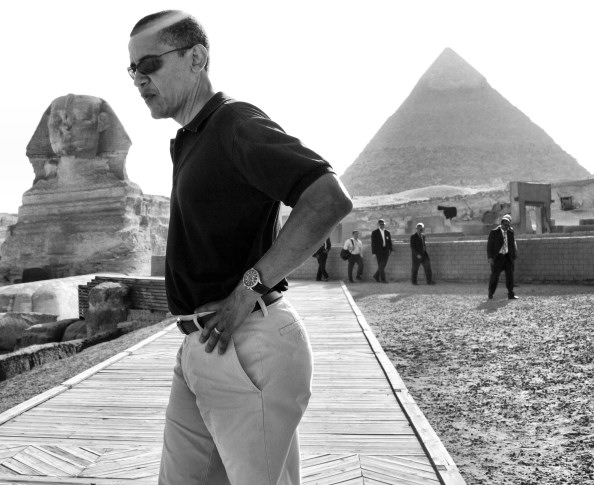 “In these difficult times, I know that the Egyptian people will persevere, and they must know that they will continue to have a friend in the United States of America.” —Barack Obama, speech on Thursday, 10 February 2011

“I am telling tell you, in my capacity as am president of the republic, that I never find it embarrassing to listen and respond to my country’s youths, but it is shameful and I will never accept is to listen to foreign dictations , whatever their sources, pretexts or justifications were….I have never been subjected to foreign pressure or dictations“–Hosni Mubarak, speech to the nation, Thursday, 10 February 2011

If Mubarak made some nationalist sounds in his final days, against those who had provided tens of billions of dollars in support for his regime over the decades, it is because he observed the U.S. playing different camps, especially knowing for how many years the U.S. had maintained open channels to human rights activists in Egypt and had repeatedly complained to Mubarak about the excessive brutality of his security services and his far-too-tight control over the political process. For a recessionary empire, Mubarak’s regime was a high-cost alternative that increasingly made violent opposition less of an option and more of a certainty–and the U.S. cannot stand what one activist today proclaimed (with great hope) was an Egypt where “all horizons are open.” No, there has to be more predictability than that, where the U.S. is concerned. So the U.S. shifted its weight to its alternatives: pro-West human rights activists, and more powerful than Mubarak, the huge military infrastructure that the U.S. helped to build. Here is “orderly transition” with “friendship” to the Egyptian people.

That the U.S. has had positive contact with diverse camps is established in various sources. On the one hand, there is the work of the Alliance of Youth Movements, originating from the U.S. State Department and the work of Jared Cohen and aided by major Web firms such as Google, for whom Cohen now works while maintaining a leading position in AYM. This opened direct communication between one April 6 Movement activist and U.S. diplomats. Ahmed Salah, co-founder of the April 6 Movement is also a senior fellow at AYM, which maintains an active profile of engagement with Egypt. Wael Ghonim, a Google executive who was captured by state security and turned into a virtual hero by U.S. media as the founder of the Facebook page that allegedly led to the January 25 protests, openly corresponds with the State Deptartment’s Alec J. Ross, with his release getting special mention by State Department spokesman P.J. Crowley, praised by Jared Cohen as the source to follow in Egyptian events. Before Mubarak had formally stepped down, Ghonim was posting in Twitter, repeatedly, “Mission Accomplished” and hailed the success of something he calls “Revolution 2.0.” Here Ghonim asks the protesters to now demobilize, as if the revolution was to stop merely at the removal of one man. Here he praises the army, clearly entrusting them to now take the lead. Ghonim instantly won the severe repudiation of those who have fought long and hard in Egypt for transformation.

Egyptian pro-democracy activists have certainly scored a major victory. Removal of Mubarak seemed almost impossible before, especially not by peaceful means. One fears that the revolution may now become fragmented, divided, manipulated, with the Ghonims touted by Washington as “heroes” and “moderates,” and others pressing for much needed greater changes likely to be set apart as “extremists.” For now, the Clinton Doctrine ensures that the U.S. is not yet down and out of Egypt.

10 thoughts on “Egypt and the Clinton Doctrine”