Canada has a very long history of practicing various forms of counterinsurgency (military, political, and even religious), first against Indigenous Peoples, then against the citizens of other nations such as Afghanistan, and now against its own citizens at home. The place that inspired Apartheid, has now reimported its own counterinsurgency. Imperialism is never just “external,” that is, directed against other nations. It always has a home front, with the immediate results being the undermining of any existing democratic institutions, the spread of militarist ideology, and a blurring between foreign and domestic policy. This is a more comprehensive “blowback” that goes beyond the narrow conception advanced by the late Chalmers Johnson and the CIA.

We have followed the connections between SSHRC’s Connection Program, to the Kanishka Program with which SSHRC shares an overlap in program themes and funding, and from the latter to the Canadian “Counter-Terrorism Strategy” which Kanishka is explicitly meant to reinforce. As Ministers Kenney and Toews made clear, research supported by the Kanishka Program (and research that supports the program) is meant to provide “useful tools” to those on the “front lines” against “terrorism”. Moreover, research under the Kanishka Program is meant to reinforce the government’s so-called “Counter-Terrorism Strategy,” especially the “Prevent” element of the Strategy. If one does not support that Strategy, then one does not apply for funding for work that is meant to uphold the Strategy. Really, there is no way of massaging this into the kind of nonsensical, contradictory “nuance” meant to provide alibis for opportunism.

Let’s therefore take a closer look at what academics are being asked to defend, uphold, and reinforce with their work under Kanishka, by continuing to the final document in the chain: Canada’s Counter-terrorism Strategy.

From Scholarship to Police Work: Academic Support for Counter-Terrorism 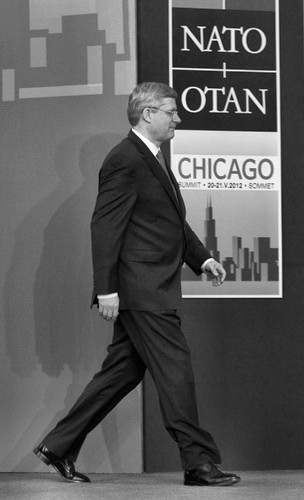 Canada’s Counter-terrorism Strategy bears the ideological imprint of its authors, especially when one follows the link to Canada’s list of “terrorist entities”: the policy is resolutely pro-Israel and anti-Islamic, with a deep suspicion and antagonism toward environmentalists, Indigenous rights activists, and anti-capitalists at home. The principles of domestication are laid out within the Strategy document itself:

“Terrorism is a global threat. Events in other countries are inextricably linked to extremism in Canada. The global environment is more interdependent than ever before, and what happens abroad can have a significant impact domestically. The dividing lines between security policy and foreign and defence policy have blurred significantly. Countering the threat demands close cooperation with other countries. This means continuing collaboration with longstanding allies and well established international organizations, such as the North Atlantic Treaty Organization (NATO). It also means working with partners with which Canada has less history of dealing. Sometimes these efforts will be bilateral. At other times they will require working through multilateral fora, such as the United Nations (UN), the G8 and the Global Counter-terrorism Forum. It may mean working to stabilize countries that provide a permissive threat environment. Foreign policy planning is more relevant to Canada’s national security than ever before”.

It’s not just the lines between “between security policy and foreign and defence policy” that have become blurred, it is the lines between all of these and domestic policy. This government’s total and unqualified support for Israel is projected inwards to all Canadian citizens, and adherence is required lest we be accused of “anti-Semitism”. The resulting practice includes government intervention in SSHRC-funded academic events.

The government would also have academics see the following domestic groups as sources of “violence”:

“low-level violence by domestic issue-based groups remains a reality in Canada. Such extremism tends to be based on grievances—real or perceived—revolving around the promotion of various causes such as animal rights, white supremacy, environmentalism and anti-capitalism”.

Thus when academics are called upon to specifically support the “Prevent” strategy, it has to be seen in light of the above, and as defined within the Strategy itself: “Canada aims to target and diminish the factors contributing to terrorism by actively engaging with individuals, communities and international partners”. In addition, academics falling under Kanishka are required to support and produce “alternative narratives,” which effectively means that they must engage in state-sanctioned, pro-government propaganda in order to realign individuals and groups away from “radical” views that fall outside the “mainstream”:

“The threat from violent extremism is a significant national security challenge. Radicalization, which is the precursor to violent extremism, is a process by which individuals are introduced to an overtly ideological message and belief system that encourages movement from moderate, mainstream beliefs towards extremist views”.

The emphasis on propaganda reappears quickly:

“Some terrorist organizations have developed sophisticated propaganda and outreach strategies. Terrorist groups communicate with people who are potentially susceptible to violent extremist ideology through various media, especially the Internet, which has evolved as a significant forum for violent extremist communication and coordination.

“The Prevent element would focus on providing positive alternative narratives that emphasize the open, diverse and inclusive nature of Canadian society and seek to foster a greater sense of Canadian identity and belonging for all. Programs would be aimed at raising the public’s awareness of the threat and at empowering individuals and communities to develop and deliver messages and viewpoints that resonate more strongly than terrorist propaganda”.

How any self-respecting scholar, let alone anyone thinking of him/herself as an intellectual, can subscribe to such totalitarian, conformist nonsense is beyond me. How any one of the Kanishka-funded “scholars” can even pretend that they have either gained or maintained legitimacy or credibility, having taken on the role of domestic spies, producers of propaganda, serving as the eyes and ears of police, engaged in supporting “public safety,” and acting as little more than alarm bells of the state is also quite beyond me. Well, not quite.

Repeat After Me! “Harmony, Not Critique”

The fact of the matter is that the ruling elites in Canada, as elsewhere, are beginning to smell the scent of their own political and economic death, and the stink is driving them mad. This madness, and the naked anger that goes with it, filters down in the society, with the strongest push I have ever witnessed in my life, anywhere, towards the maximum-possible regimentation, boosted by rabid consumerism, subservience to militarist symbols and messages, and the emphasis on harmony.

Hence, at my own university one colleague found that Concordia’s “mission statement” had seemingly been rewritten overnight, without any sort of consultation and discussion–because consultation and discussion are anathema to the new, corporatized university. Thus the 2009-2010 mission statement of Concordia University was about, “fulfilling the mission of universities to develop and disseminate knowledge and values and to act as a social critic,” and, “fostering an environment of academic and pedagogical freedom,” so the University would be better able to prepare its graduates to become “informed and responsibly critical citizens”. Now comes the current mission statement of Concordia University, rewritten to emphasize that Concordia stands for “well-being through harmony”, calling upon us to “strengthen society” and over and over again it speaks of “respect” and “respectful engagement”–and entirely erasing all of the previous elements mentioned, both critique and even academic freedom.

Don’t the ones in authority all sound rather stressed and anxious? If their message is an inherently powerful one, a valid, persuasive position resonant with widely agreed upon facts, then why the need for all the funding, the laws, the doctrinal statements, and the strategy documents? Does it inspire much confidence in their message? Does it boost the credibility of the authorities?

One thought on “Complying with “Counter-Terrorism”: State Securitization of Canadian Academia (part 3)”