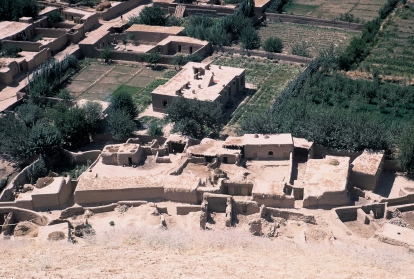 Maimana, the capital of Faryab Province, as I photographed part of it in 1969

The new USNATO military base at Maimana. Note the farmland plowed up to prevent approach and to prevent improvised explosive devices to be hidden there by the occupied peoples. Stand back! You are too close.

[Note: this article incorporates some text from The Fire This Time. That is because of what I encountered in the literature of the Army in writing that. In this article, I align around the idea presented in that article that the Empire now will explicitly employ “cultural solvent” to dissolve, to “sever” the local unity that Eric Wolf wrote of 53 years ago.]

I quote it again:

Empires and conquests sweep over the land, … but in the dusty streets of the little villages, a humble kind of life persists, and rises again to the surface when the fury of conquest is stilled, …. Yet, until today, the community of cultivators has retained its capacity to turn in upon itself and to maintain its integrity in the face of doubt and disaster – until today, and perhaps not much longer. Because the modern world is engaged in severing once and for all the ties which bind people into local unity, in committing them to complete participation in The Great Society. This is a one-way street from which there is no return. (Wolf, Eric, 1959, Sons of the Shaking Earth: The People of Mexico and G?uatemala, Their Land, History and Culture, p. 68)

“We have to have a balancing act between protecting our soldiers and not offending the Afghans we are partnering with,” said Col. Thomas W. Collins, the director of public affairs for the American-led NATO coalition in Kabul.

He continues: ”The catalyst for the latest efforts to protect coalition forces was the attacks on Aug. 10 in Helmand Province that one military official called “game changing.” “

[So, it seems now the Mission is “to protect coalition forces”. Is that why USNATO is in Afghanistan, to protect themselves? I’d say the USNATO representation of the game has changed.]

“Shortly after midnight in Sangin, where Marine Special Operations troops met with the Afghan local police they worked with, an Afghan wearing a National Police uniform opened fire, killing three of the Marines. Hours later, a boy who worked as a tea server at a base a hundred miles to the south sprayed machine-gun fire inside a makeshift gymnasium, killing three other Marine trainers.

“What was most alarming to some officials was that all of the casualties in Helmand involved military trainers and not conventional infantry, typically the targets of such attacks. Because they were thought to have closer relationships with the Afghans, the trainers were believed to be safer.

“Wherever someone is from, they cannot tolerate negligence and degradation of their country’s sanctity,” said Alaudin, an Afghan soldier in Khost Province. Anyone who trains Afghan forces and “uses tough and derogatory language will get a similar reaction,” he said. Those who say “the Taliban infiltrated in the army” and are behind the attacks, he said, are “totally wrong.”

Sayed Rahman, a commander in Kunar Province, blames many attacks on soldiers from rural areas whose customs clash deeply with those of their American mentors.
“They do not know anything else except religion and their traditional codes,” he said. “They see attitudes of foreign forces alongside themselves which are not compatible to what they understand. That causes spite and resentment among them.”

[Let us be anthropologically explicit: he is talking about what we call “worldview”, or the cognitive culture which binds people into community, which allows them to communicate unambiguously, which is rooted in long history in their landscape, something the USans do not have; so cant really grasp the depth of how culture binds people into an organic community, responding organically to threat to any part.]

“Some Afghan commanders say attacks are simply a product of a violent society. “No one is safe now; everyone gets killed,” said Gen. Mohammad Zaman Mamozai, a senior police official in the Interior Ministry. “

The truth is now emerging. We are no longer claiming to be moving the occupied peoples’ “Center of Gravity”. We vaguely realize that in such a culturally diverse nation, there are many different cultural realities and different Centers of Gravity. Move one “tribe’s” center of gravity, and how others will move is unpredictable, unless of course, you talk to the people; hold “good faith consultation” as is required inside the USA when dealing with indigenous peoples. I think the Roman generals also followed the same understanding that has led the US to finally admit that “winning the hearts and minds” of a violently subjugated people is not really its intent, but merely a smokescreen. As the colonel said in Human Terrain System training: that is not realistic.

EUREKA! I Found It!

Trying to cut through all the bullshit in the media, to get down to what I know to be the actual unspoken strategy of Global COIN to eliminate the local unity, the genuine cultures of those societies who still stand outside the “Great Society”, I found exactly what I was looking for: the Army’s use of Cultural Solvent to dissolve these pesky “tribes” and help those poor ignorant people to transfer loyalty to the State’s political system under “international law” that the Empire is immune from.

Writing his MA thesis on this Mission for the US Army Command and General Staff College in 2007, Major Brian Lionberger submitted his Thesis entitled: Emerging Requirements For US COIN: An Examination Of The Insurgency In The Niger River Delta Region.

‘The evolving insurgency in the Niger River Delta region of Nigeria is and will continue to threaten U.S. national security interests in terms of regional political stability and access to strategic resources.”

To be clear: the Major is saying that this war in Nigeria is about the USNATO’s presumed right of access to and exploitation of Nigeria’s own strategic resources. This is consistent with our claims to that USNATO entitlement in Iraq and the Levant in general, in Iran, Afghanistan, Pakistan and India.

The Major further informs us:

“Now, along with other regions of Africa, as the Gulf of Guinea’s strategic influence on the U.S. and U.S. allies grows, its security has become a key part of the U.S. National Security Strategy and, like the enduring presence in the Horn of Africa, may see a semi-permanent deployment of U.S. forces in the near future. “ [Yes indeed. Since 2007 we have seen Progress.]

““Nigeria is the fifth largest provider of oil and petroleum products to the United States, currently providing 8.5% of total U.S. oil imports, and the most for any single African producer (U.S. Energy Information Administration 2007). The region, however, is beset with political instability and internal conflict, ranging from banditry and ethnic militarism to active and well organized insurgent movements.

The Major’s “ethnic militarism and well organized insurgent movements” equates to what Eric Wolfe called “local unity” and independent cooperation. One can easily see that the USNATO Mission is to end all such attempts at sovereignty, at local unity, and simply play hard ball by economic, financial, social blockades and military intervention until there is no resistance to the Agenda, The Mission – which is to induce submission and dependence. This is the “one-way street” that Wolfe saw for indigenous peoples if the Juggernaut could not be stopped by the Lilliputians.

In his analysis of his planning of Nigeria’s future, this US Major continues:

“Society and culture in Nigeria is defined in the large part by tribal affiliations. While Nigeria is an emerging democracy, where affiliations to the state and or a political party is becoming a solvent to the bonds of tribe and ethnicity, those original cultural structures are still in place, viable and important to understanding Nigeria as a whole.”

Thus, cultural diversity is explicitly presented as a threat to the goals of the Mission. But, The Mission has a solvent to dissolve those “bonds of tribe and ethnicity”: a “solvent” to dissolve genuine cultures and leave only raw human resources, human capital, ready for reprogramming; the raw human capital, almost ready for the shelves of the Human Resources Supermarket; from which leasing the “personnel manager” will get a bounty.

” This overarching disenfranchisement for the lower economic class in the Delta region and their total inability to gain redress through the political process has made their choice to become insurgents the only choice available in many cases. … The Niger Delta People’s Volunteer Force (NDPVF), the Bakassai Boys, the Movement for the Emancipation of the Niger Delta (MEND), the Coalition for Militant Action (COMA), the Niger Delta Vigilante Force (NDVF), and the Prince Igodo Gang, to name just a few, emerged onto the scene. Not unlike the localized nature of inner city gangs in the U.S., these insurgent groups have established territories and compete with each other for the illicit profits from kidnapping and bunkering, but are not coordinated and synchronized with each other against their common enemy, the Government of Nigeria.”

It use to be Christian missionaries who moved in first, then came the sale of washing machines and White King detergent ushering in the global corporations to replace local government and then the Peace Corps and USAID. Now it is the Human Terrain System getting coordinates upon targets of probable Bad Guys in the probable network of terrorists.

The gloves are off. Push has come to shove. The King rides nakedly brutal through the streets while The People hide from the drones inside their houses with the children; waiting…

Local men and boys in Maimana, waiting near an antique machine gun. They have by now, updated their arsenal with the unintentional contributions by captured USNATO weapons. Better keep a sharp eye looking over your shoulder.

One thought on “Separate Realities, Centers of Gravity and Global COIN’s Cultural “Solvent””