Gaddafi is Gone, the War Continues

I am a couple of days late in commemorating the date when Muammar Gaddafi was brutally lynched in Sirte, Libya, after first being bombed by NATO jets and surviving missiles fired from U.S. Predator drones, only to be sodomized with a knife, beaten, and then shot (by a French agent, as some officials allege). One of his attackers–one on a list–recently paid the price for this gruesome murder, by undergoing one of his own, allegedly at the hands of fighters in Bani Walid, which remains a liberated stronghold that was a bastion of popular support for Gaddafi. As I type this, Bani Walid is being bombarded and is under siege by vengeful militias from Misrata, who are unable to conceive of how Bani Walid should get away with the abduction of a small group of men, and the eventual death of one (mentioned above), when they themselves have abducted and tortured hundreds of residents from Bani Walid, none of whom have been returned to their families. This is the prosperous and happy life we see in the “new Libya,” democratic and peace-loving, with utmost reverence for human life. “Things are better,” now that a “dictator,” who never razed whole cities (i.e. Sirte, 2011) and eradicated entire populations (i.e. Tawargha), is gone.

Meanwhile, in the U.S., millions of people are about to go and reward with re-election one of the chief criminals responsible for the destruction of this once proud, defiant, and independent nation. I should be forgiven for thinking that some giant machine has sucked the souls and consciences out of such people.

“While the toothless bulldog of an African Union sat and watched so powerlessly
Libya was ransacked by mafias and ninjas so vehemently
What was his crime?
He wanted the African currency for his oil
He wanted to pay the price
He was slaughtered like a dog on his own soil
He rejected the Arab League and flocked with his African identity
He regretted his past and wanted to see Africa in total sanity
Muammar Al Gaddafi was a threat to western, hypocritical capitalists
Free food, shelter, healthcare and education, he gave to his people
As a champion of all African socialists. Huh!”—Blakk Rasta, “Gaddafi”.

“Gaddafi is gone, oh no! He was my brother, my father, my friend,” these and the words above came from a reggae band in Ghana and presented in a professional music video made by Ghana Music as part of the Blakk Rasta’s album, Born Dread (transcribed by Guanaguanare). Blakk Rasta, born Abubakar Ahmed, novelist, playwright, and a popular and sometimes “controversial” host of a radio show on Hitz 103.7 FM in Ghana, was responsible for greatly popularizing Barack Obama in Ghana in 2008 and produced a hit song about Obama, then meeting with Obama in person in 2009 for a photo op in which they had their arms around each other’s shoulder (The Buzz, 2009/6/15). Initially Blakk Rasta even criticized Gaddafi in one of his songs, “The Libyan War,” saying that Gaddafi had been “president for too long and would have to step down but kicking him out should not be done through a coup d’état, murder, assassination or killing”—and then Blakk Rasta began to turn against his former idol, Obama (CitiFMonline, 2011/11/6).

Things changed radically once NATO began bombing Libya and trying to overthrow Gaddafi. From then on, and especially after the gruesome publicized murder of Gaddafi, Blakk Rasta went on “a war path with the West for what he says is the deliberate assassination of an African savior,” Muammar Gaddafi. According to Blakk Rasta, “the West does not want Africa’s self-reliance and success thus killing the man who was fighting for the continent’s redemption”. He explained that the West (the U.S. and NATO) killed Gaddafi because he “wanted Africa to have one currency known as the Gold Dinar which would have destabilised all the wicked who have been sponging on Africa’s resources”. Now Blakk Rasta spoke of Gaddafi as a martyr and devoted Pan-Africanist, who had rejected the Arab League. Further praising Gaddafi, he added:

“He was giving his everything to see Africa strong remember he established three banks in Africa. He wanted to kick out the International Monetary Fund (IMF). The West was making a lot of money out of Africa and he didn’t like that so he established these banks and was on the verge of introducing with the support of other countries the Gold Dinar which would have Africa freer. We [Africans] wouldn’t have gone to the IMF to get any money, they [West] didn’t want that”. (Aglanu, 2012/1/14)

While it is difficult to know what depth of popular sentiment is represented by public figures prominent in African popular culture such as Blakk Rasta, there is no denying that there was an outpouring of grief in numerous cases recorded by African mass media and electronic media across the continent….[for more, continue reading the final chapter of Slouching Towards Sirte–please see below, plus see the little surprise I prepared for today (next post to come)]

SLOUCHING TOWARDS SIRTE: NATO’S WAR ON LIBYA AND AFRICA 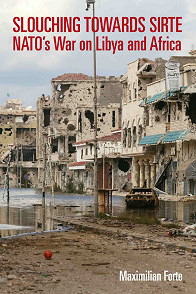 Please click the image for a flier with the table of contents.