The war in Libya never happened. At least that is what one might think, considering the dearth of serious analysis and critical reflection in Canada since our participation in NATO’s bombardment campaign ended a year ago. Yet in Libya, in many ways the war is still happening. If we (we as in all the federal political parties) thought we could bomb a country into democracy and respect for human rights, we were worse than just naïve. We were guilty of hiding our motivations, and guilty of ignoring the consequences of our actions.

The problem is that none of that was true.

This was instead a series of “incubator baby” stories on steroids: exaggerate and repeat such fabrications often enough and some of it might seep into public “consciousness” as if it were fact.

We were also told that if we failed to act in “stopping” Gaddafi, that it would make us complicit and responsible for allowing his atrocities to happen. Failure to act, makes us responsible for the actions of others. Yet when we did act, we refused to be held accountable for our own actions. This “logic” is the kind of moral dualism that interventionists swear by. No one else is allowed to kill civilians: that’s our prerogative.

NATO member states, such as Canada, and their chief spokesmen never failed to label every armed action against Libyan forces as “protecting civilians.” What NATO’s “protection” actually involved should alarm and upset everyone.

On numerous occasions, NATO refused to protect innocent civilians and knowingly let them die. This was the case with over 1,500 African refugees who died at sea, fleeing Libya, while in close proximity to NATO vessels that monitored all traffic and blockaded Libya’s ports, with some vessels coming into direct contact. The European Council, the Italian government, Amnesty International, and a report by Goldsmiths all faulted NATO for violating international law in ignoring the pleas for help of refugees that were adrift and dying. This is a serious crime under international law. No one has been held accountable.

On other occasions, NATO jets and drones specifically and knowingly targeted civilians. These were the findings of both an Independent Civil Society Mission to Libya and even Amnesty International. In a case that occurred in Sirte on September 15, 2011, NATO missiles struck and killed 47 civilian rescuers. This is what is now referred to as “double tapping,” an established U.S. practice that was shockingly documented in the “Collateral Murder” video from Iraq and by the Bureau of Investigative Journalism. Civilian men coming to the aid of those who have been attacked have been redefined by the U.S. government as not being civilian, merely for being able-bodied men of combat age.

In other cases, NATO along with their allies on the ground, the Libyan insurgents that we illegally armed, announced phony ceasefires to allow civilians to leave targeted cities (yes, we targeted cities, and we demolished them too: e.g. Sirte). This was merely to allow the resupply of the insurgents, and NATO in some cases did not cease its bombardments. Nor were the aerial attacks as “precise” and “surgical” as was claimed (language we choose to make us sound like healthcare providers).

Our intervention not only prolonged and escalated Libya’s conflict, it enabled mass atrocities by the insurgents we supported. Mass detentions, abductions, torture, racist lynching, and the ethnic cleansing of whole towns have resulted. Never under Gaddafi had such widespread atrocities been reported. Yet we would not be accountable. Indeed, we don’t even like to talk about such matters.

We acted to bring about regime change. We specifically targeted Gaddafi and his family for assassination. And then, like Hillary Clinton, some of us gloated.

We make others suffer, so we can fancy ourselves as nurses bearing a cure. Benghazi was “saved,” but only so that Sirte could be reduced to rubble—jaw-dropping destruction that had many visitors draw parallels with Stalingrad and Grozny. We claimed this was for “human rights,” but our actions tell the opposite story. We did this to destroy independent African integration efforts, to return Africa to its proper place as our foreign reservation, with its petroleum, minerals, and construction contracts placed in our hands. You might not like to read such things, but that is no excuse for the absolute silence on Libya, and what we did there. Lest we forget. 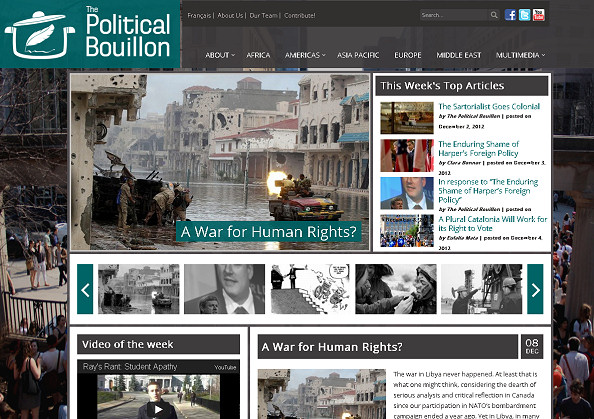 One thought on “A War for Human Rights?”