For those readers in the Toronto and Hamilton areas, two events in the coming days may be of interest, both related to NATO’s war against Libya, “humanitarian intervention,” the “responsibility to protect,” and Canada’s participation in such warfare. Just in time, Media Lens just published coverage of the book, Slouching Towards Sirte, in “ ‘Limited But Persuasive’ Evidence – Syria, Sarin, Libya, Lies.”

The first of the two events, as advertised in the local alternative media, will take place in Hamilton on Tuesday, June 18, 7:00pm, at the McMaster University Medical Centre–Ewart Angus Centre (HSC1A6), at 1280 Main Street West, and the admission is free. This event is organized by the great people at the Hamilton Coalition to Stop the War (see the Facebook event page). From one of the posters for the event:

The right book at the right time. In a 24/7 entertainment-driven news cycle, it’s easy to forget what happened just two years ago. But Max Forte does not let us forget. He just completed the definitive work on the NATO bombing campaign and regime change operation in Libya, a campaign where the public was often told the inverse of the truth. In an era of “permanent war for permanent peace,” Forte’s revealing exposé highlights how rhetoric about “saving” lives abroad can lead to the opposite.

Now, in its first public launch in Hamilton, Slouching Towards Sirte can help prevent our minds from “slouching” during the next “humanitarian intervention” by the West in a sovereign country, perhaps Mali or Syria. Come join us for your chance to obtain a copy of this new Canadian book accompanied by Forte’s explanation of why preventing Canada’s participation in U.S. foreign wars is more important now than ever before.

The second event, co-organized by A Different Booklist and Baraka Books, will be held in Toronto on Wednesday, June 19, starting at 6:50pm, at Beit Zatoun, 612 Markham (Bloor and Bathurst). From the publisher’s site:

Max Forte, author of Slouching Towards Sirte, NATO’s War on Libya and Africa will be giving a talk entitled The Adventures of Liberal Humanitarianism in Africa: Bombing Libya to Freedom in Hamilton on Tuesday, June 18 and in Toronto on Wednesday, June 19. An anthropologist and peace advocate, Max Forte was one of the first to challenge the colonial underpinnings behind NATO’s drive to war in Libya. Wars today are sold as rescue missions, but it is we who need rescuing from the return of the colonial “White Man’s Burden.”

The two talks come at a time of growing calls to “do something” in conflicts all over the world. What if, as in Libya, NATO members and allies are already taking sides in civil wars and preparing the ground for intervention in other countries, such as Mali and Syria? Maximilian C. Forte gives us a look into these mechanisms in the ongoing disaster that is the “humanitarian intervention” in Libya.

In Slouching Towards Sirte Forte notes that the Liberal humanitarians joined the call of NATO saying “we can’t stand idly by” and thus gave impetus to the massive destruction and murder that was wreaked upon the Libyan people in 2011. After methodically taking apart every single argument justifying war on Libya and showing what the real motives were, Forte concluded his book as follows, “The next time that empire comes calling in the name of human rights, please be found standing idly by.”

Across the Atlantic, for those of you in or near Dublin, Ireland, please consider joining our friends and comrades at the Dublin G8 Alternative Summit, with events starting on Monday, June 17, and continuing on Tuesday, June 18. Keep in touch with Facebook event page for the Dublin Alternative G8, and their Twitter feed. All three of these events, held in Canada and Ireland, have a common link: both will be focused on “the new scramble for Africa,” humanitarian imperialism, and to varying degrees the war in Syria. I sincerely regret that I could not participate in the Dublin event as the invited featured speaker, but there will be more collaboration in the future to be sure. 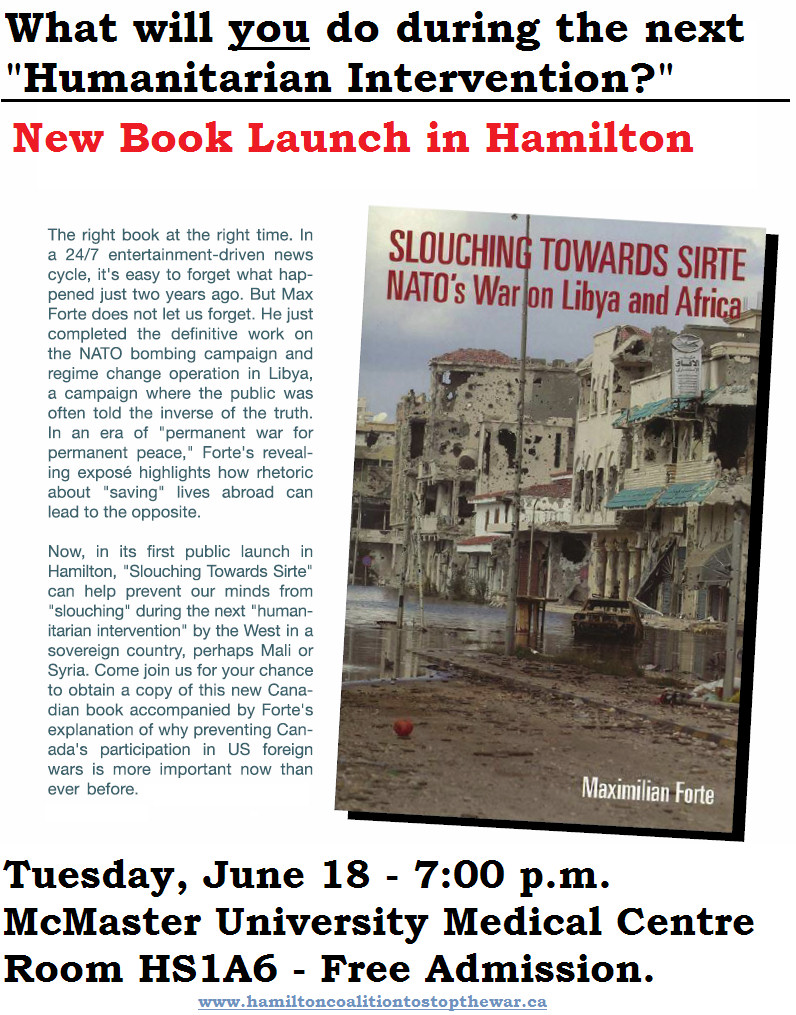 4 thoughts on “The Adventures of Liberal Humanitarianism in Africa: Bombing Libya to Freedom”