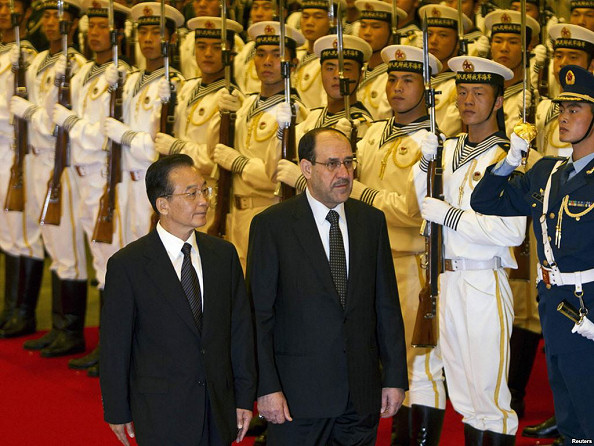 The U.S. reconstruction of Iraq has come and gone, with a great deal of money spent and not much of a tangible result. The question on many people’s minds is: can China do better? A New York Times article, published in June 2013, caused quite a stir in the West, when it revealed that China is now buying almost 50% of Iraq’s oil exports. Last week, Reuters quoted Iraqi officials saying that China wants to increase it purchases of Iraqi oil by 75% in 2014. In effect, this means that the bulk of Iraq’s state budget will coming from Chinese state bank accounts. Moving forward, the political implications of such close economic ties are likely to be profound.

Iraq currently produces approximately 3.3 million barrels of crude oil per day. The government plans to increase this figure to 6 million barrels per day over the next decade. Iraq’s infrastructure is currently incapable of supporting any such increase. A massive building program is required – and who better than the Chinese to help carry it out. China has already made its mark as the world’s number one builder, with a development budget of over $500 billion for infrastructure projects in developing nations for 2013 alone. In many countries, China pays for oil and other natural resources in highways, ports, airports, hospitals and universities, thus making sure that it is the people who directly benefit, rather than politicians and middlemen, who would often prefer to be paid in cash. The downside of this for host countries is that Chinese companies often bring their entire workforce from China, leaving native workers helplessly looking on. Iraq seems determined to avoid this situation, and is favouring joint ventures between Chinese and Iraqi companies – mostly state companies from both sides.

In 2010, Beijing made clear its intentions were serious by cancelling 80% of Iraq’s $8.5 billion debt to China. In the two years up till then, Iraq and China had already signed trade deals worth nearly $4 billion. In October 2008, Chinese National Petroleum became the first foreign oil company to sign an oil contract in the post-invasion period, when it renegotiated a deal signed with the Ba’ath administration to develop the Al Ahdab Field in Wasit Province. This success was quickly followed by China winning three of the 11 oil field development contracts offered by the Iraqi government, including in the giant Rumaila field in Basra. As Iraqi officials pointed out, since Chinese state companies don’t have to worry about shareholders, they can offer very attractive terms and are quite happy with the small profit margins the Iraqi government has wisely restricted the oil companies to.

However, Chinese reconstruction in Iraq is far from limited to the oil business. Iraq is still in a desperate situation in relation to electricity supply – with even major cities often restricted to a few hours of grid supply each day. In March of 2013, the Zubaydiah Power Plant, in Wasit Province, began supplying the grid with 2,500 megawatts of electricity. It’s the largest power plant in Iraq, and was built by Shanghai Heavy Industry at a cost of $940 million. The Zubaydiah Plant is run on heavy fuels, but Chinese companies are looking to the future, when gas powered stations are expected to meet 85% of Iraq’s electricity needs by 2025.

In the sphere of consumer consumption, Chinese companies have also been making their presence felt. In May 2013, the Basra Governorate signed a contract with Hong Kong construction company, Mister Wang, to build a residential housing project named “Golden City” and consisting of two thousand housing units at a cost of $250 million. Iraq’s General Company for Car Manufacturing, which belongs to the Ministry of Industry & Minerals, has signed contracts with three Chinese car manufacturers, Great Wall Motor Company, Gonow and Proton, to assemble and market nine thousand cars and pickups annually. Iraq has also purchased $100 million of light arms from China for its police force.

It’s clear that the Chinese business model is the most successful in the world today, i.e. private enterprises built around a critical mass of state enterprises, and Iraq has much to gain from Chinese involvement in its development. Key to Iraq’s success will be joint ventures, where Iraqi State Owned Enterprises gain access to Chinese technology, training and methods. Iraq has the opportunity, from its own ongoing construction experience, to build world class state companies, which will continue to earn money for Iraq long after Iraq’s construction is completed, and even after the oil has gone.