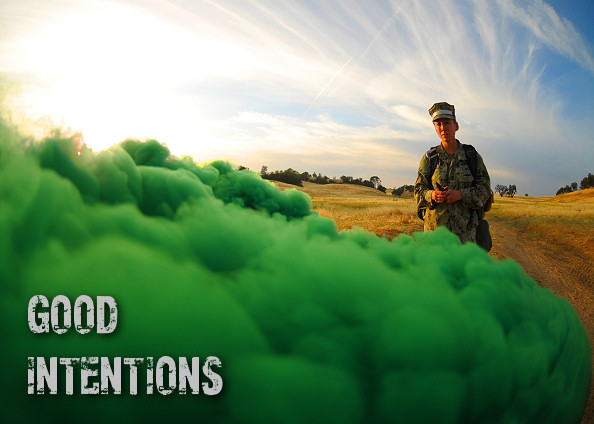 The following is an extract from my chapter, “Imperial Abduction Lore and Humanitarian Seduction,” which serves as the introduction to Good Intentions: Norms and Practices of Imperial Humanitarianism (Montreal: Alert Press, 2014), pp. 1-34:

Two of the most enduring beliefs, among at least the political elites and a substantial portion of the wider population in North America, are that military intervention abroad and all sorts of other less forceful interventions, are: (a) for the good of other societies, whose lives and whose very nature as human beings will experience progress as a result of our intervention; and, (b) that the security of the intervening society will thus be enhanced, while its global leadership will also be secured. These constitute beliefs akin to any other beliefs that anthropologists and sociologists have studied in the value systems of other, discrete populations: as beliefs they maintain contradictions without resolving them, and as beliefs they can thrive in the absence of serious questioning, and in the absence of empirical support. One main difference about these beliefs, however, is that situated as we are in North America, we do not require the minimalistic year-long ritual of “fieldwork” abroad in order to discover them: we are all already immersed in this value system, and have been all of our lives. So let us proceed to extricate ourselves and question what we have received.

We proceed not only by “studying up,” but also studying horizontally in social terms (the society as we experience it directly), and introspectively (reflecting on the meanings of various codes we have been taught by parents, schools, the media, and what we then hold as if they had always been our very own). We can become aware of our own very deeply planted faith in the value and necessity of our interventions abroad when we find ourselves in situations where such beliefs are openly questioned, contested, or refuted. This is especially the case when we are faced with seemingly hard-line rejections of Western interventionism: then, we invariably always ask, and we feel impelled to ask, “But aren’t there times when we should intervene?” This is always the immediate default question, and one that not coincidentally also preserves our belief in our own special role in history, as the special people with the right answers, as special forces who have either the right or the duty to impose our solutions from the top down. We will even rewrite history to mandate the only allowed “positive” answers, so we tell each other that we intervened in World War II to put a stop to the Holocaust, and that our alleged “non-intervention” allowed Rwanda’s “genocide” to happen (instead, see Philpot, 2014).

We believe that our right to safety or security is an absolute imperative. The ultimate default question/belief, behind or beyond this one, concerns our very nature as human beings—is it not an essential part of human nature to engage in war? Deconstructing such an ostensibly straightforward question takes time (and many others have done so), especially since the question elides violence with war, and war with empire, and renders both war and empire as “natural” and thus normal. At the same time this position assumes a single human nature that is everywhere the same, and always has been. It is interesting to witness that when our “culture” of interventionism suffers setbacks, we always beat a hasty retreat back to “nature”.

Much of the same pattern of elision and naturalization occurs when it is assumed that either war and/or empire are essential to the maintenance of our ultimate security, and all human beings, we believe, assert their security through violence—never through cooperation, collaboration, solidarity or reciprocity. Under the constraints of what is ideologically amiable to the power elites, we thus toil at reimagining our most distant human ancestors as prototypical warrior capitalists. What makes all of this possible is belief—not that beliefs unilaterally determine the imperial system.