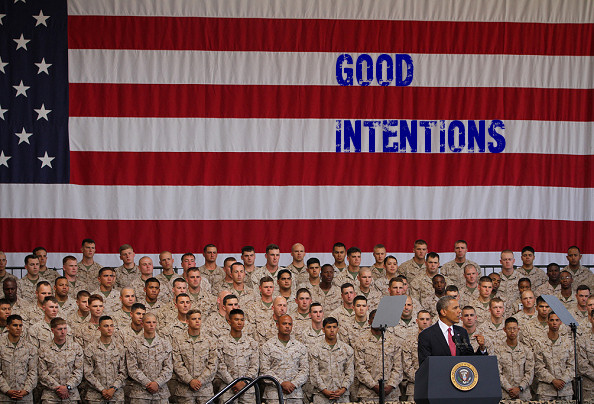 The following is an extract from Keir Forgie’s chapter, “US Imperialism and Disaster Capitalism in Haiti,” published in Good Intentions: Norms and Practices of Imperial Humanitarianism (Montreal: Alert Press, 2014), pp. 57-75:

Overview: Keir Forgie details some characteristic actions of the new, that is, US imperialism enforced upon Haiti leading up to and following the earthquake of January 2010: military and CIA intervention, the UN-administered MINUSTAH occupation, US-funded NGOs, the militarization of humanitarian aid. These tools of disaster capitalism are all part of the new imperialism, Forgie argues. The US military and CIA have repeatedly intervened against Haitian sovereignty to impose US “democratic” systems that favour neoliberalism. Meanwhile, MINUSTAH enforces US objectives repressing free-speech and effectively acting as a large gang, one opposed to supporters of the overthrown president, Jean-Bertrand Aristide. NGOs, for their part, provide a means through which the US can funnel aid money and pursue self-interests while undermining local authority. In addition, the militarization of humanitarian aid in Haiti exemplifies a masked occupation under the guise of altruistic rhetoric. And as Forgie argues, predatory impositions of neoliberalism and corporate interests that pushed through disaster capitalism serve to subvert Haiti to a US means of production and sponge for capital overflow. Each of these coercive methods ensures US hegemonic globalization, acting as distinguishing features of the new imperialism, Forgie explains.

The US has used the militarization of humanitarian aid in Haiti to mask a forced occupation and imperial ambitions under the guise of stabilization. The US government initiated a military invasion of Haiti before President Préval issued any security concern, thereby undermining Haitian sovereignty. The US greatly exaggerated the threat of internal violence and political uprising to justify an excessive military deployment, which criminalized the victims. Furthermore, the US used its military force and political influence to immediately usurp control of the rescue operation, resulting in the subversion of food and medical security in favor of military priorities. In this sense, the US demonstrated two things: the military’s inability to transfer combat skills to humanitarian action and the willingness of the US to capitalize upon any opportunity in the Caribbean in pursuit of self-interests.

The US government initiated a military deployment in Haiti before any request was made by the Préval Government, demonstrating US self-entitlement to usurp national decision making. According to a cable from Secretary of State, Hillary Clinton, the US deployed 4,000 military personnel to arrive in Haiti by January 15, followed by an additional 6,000 two days later. In a January 16 cable, President Préval established the following key priorities in the aftermath of the quake: communications, coordination, transport, food, water, medicine, and burials—no formal request for military personnel had been made (Herz, 2011/6/15). On January 17, a “joint communique” issued by Préval and Hillary Clinton stated the first request from Haiti for increased security assistance by the US military (Herz, 2011/6/15). Although the sense of unilateral US intervention was diminished, it did not entirely calm criticism from the international community of the US militarization of aid to Haiti. This forced the US to begin a campaign of rhetorical appeasement that reinforced the role of the US military as an assistant, not a leader, to the Haitian rescue mission (Clinton, 2010/1/22). Thus began the third US military occupation of Haiti within the previous twenty years.

The US deployed an excessive amount of military personnel to support the MINUSTAH security effort and justified this action through an exaggeration of the threat of looting and violence; however, the reality is that such incidences were sporadic and the preconceived notions of savagery served only to criminalize the victims who were in need of real humanitarian assistance, not law enforcement. In a January 14 cable to US Embassies and Pentagon commands worldwide, Hillary Clinton warned of significant looting related to food shortages; however, according to Ambassador Merten in Haiti, such incidences occurred only sporadically (Herz, 2011/6/15). The expectation of large-scale violence that could interfere with the delivery of essential supplies was the justification behind the US decision to deploy military forces before medical aid, water, or food. Considering that incidences of violence were relatively rare, the militarization of humanitarian aid in Haiti appears to have been an effort to assert political control rather than provide genuine assistance. As explained by Camille Chalmers, “The first response [has been] a military response. It is a militarization of humanitarian aid. Today there are 32,000 foreign soldiers in the country, and I don’t think we need 32,000 soldiers to distribute humanitarian aid” (Mennonite Central Committee [MCC], 2010/2/8). According to the Pentagon, at the height of its intervention, there were approximately 22,000 US military personnel in Haiti, with 7,000 present on the ground and the remaining forces mobilized in 58 aircraft and 15 nearby vessels. In addition, the Coast Guard was assisting in the interception of any potential refugees (Herz, 2011/6/15). On January 19, Sebastian Walker, a reporter stationed in Haiti, explained, “Most Haitians here have seen little humanitarian aid so far. What they have seen is guns, and lots of them….This is what much of the UN presence actually looks like on the streets of Port-au-Prince: men in uniform, racing around in vehicles, carrying weapons” (Democracy Now!, 2010/1/19). With an additional 10,000 MINUSTAH soldiers present on the island, claims of an overwhelming military presence and sense of US domination are understandable.

The US used its military force and political influence to usurp control of the rescue operation and subvert food and medical security in favor of military priorities. The effects of this interference were most evident and criticized in relation to the US military control of the Port-au-Prince airport, which it seized within the first 72 hours after the quake. The US pushed forward an agenda that prioritized military flights over planes that were carrying medical personnel, essential supplies, and relief experts. The primary concern of the military was to establish a secure atmosphere, which interfered with the delivery of aid. The result seems contradictory, as civil unrest, one might assume, could be more likely to develop as supplies run low and aid is slow to arrive (Way, 2010/2/2).

The preferential treatment of US military flights carrying weapons and equipment elicited serious criticism from mid-level French, Italian, and Brazilian officials. The medical aid organization Médecins Sans Frontières (MSF) was particularly frustrated by the US’ control. Five MSF planes carrying vital supplies and personnel were refused landing for extended periods and were forced to land in Santo Domingo, Dominican Republic (Democracy Now!, 2010/1/19; Herz, 2011/6/15; Way, 2010/2/2). Similar difficulties were encountered with flights supplied by the UN World Food Program (WFP), which carried food, water, and medicine as well (Bennis, 2010/1/20). Such instances have led to the accusation that the US in fact interfered with the progress of the rescue mission. As Patrick Elie, a reporter in Port-au-Prince, explains, “the priorities of the flight should be determined by the Haitians. So, otherwise, it’s a takeover” (Democracy Now!, 2010/1/19). Clearly, the US was more concerned with its agenda of military control over humanitarian relief—arguably an expected outcome with the militarization of humanitarian aid—which paved the way for disaster capitalism to follow.