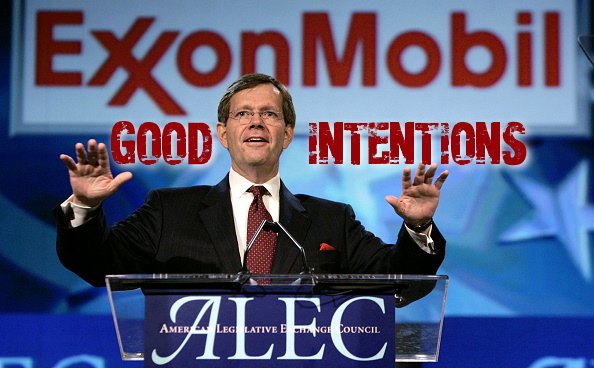 The following is a series of extracts from Mathieu Guerin’s chapter, “Life, Liberty and the Pursuit of Wage Labour: The American Legislative Exchange Council and the Neoliberal Coup,” published in Good Intentions: Norms and Practices of Imperial Humanitarianism (Montreal: Alert Press, 2014), pp. 121-145:

Overview: Mathieu Guerin produces a fascinating investigation and theoretical discussion of the American Legislative Exchange Council (ALEC), a not-for-profit organization that brings together corporate representatives and state legislators—thus “marrying” both capital and the state. Behind closed doors, Guerin reveals, the representatives and legislators design and vote on model bills. Legislators then bring the model bills home to their respective assemblies and attempt to implement them. The corporate members of ALEC are, in this way, empowered to change citizen’s rights without interference from the federal government. By fostering close ties with state legislators, these corporations have the power to impose their vision of society without recourse to military or police violence. Guerin also investigates the connection between the character of gentrification in San Francisco and the bullying might of Silicon Valley’s ALEC-affiliated corporate technocracy. This case study demonstrates how capital co-opts the existing state structure as a mode of subjugation and repression. Guerin’s research and analysis conclude that ALEC is an organization that symbolizes a corporate imperium rooted in the rise of neoliberalism in the early 1970s and emerging within the established imperial state of the US. An in-depth look at the infamous Powell memorandum reveals an imperialistic ideological continuity between its conception in 1971 and ALEC itself.

….the American Legislative Exchange Council (ALEC)…is an organization which facilitates the implementation of US state laws at the hands of global corporations (Center for Media Democracy [CMD], 2014/4/5). The front page of the CMD’s website dedicated to investigating ALEC states in bold text:

ALEC identifies itself as nonpartisan, although its affiliation with oil giants and the NRA, as well as its arduous labouring against environmental sciences and activism, reveal a clearly conservative agenda (CMD, 2014/4/5). I ask how imperialism functions in our time, one where corporations not only circumscribe and permeate the nation-state infrastructure through organizations like ALEC, but also co-opt it to change policy and thus to impose their vision of society without necessarily resorting to military or police violence….

On August 23, 1971, corporate lawyer Lewis F. Powell Jr. sent a confidential memorandum entitled “Attack on American Free Enterprise System” to the Chairman of the US Chamber of Commerce Education Committee (Powell, 1971). The memo deplored a perceived attack on “the American economic system” by what was ostensibly the entirety of the American intelligentsia, media and the majority of the political scene (Powell, 1971, pp. 1–3). The memo inveighed against the discourse that criticizes “American business,” and it vilified such public figures as Ralph Nader, Charles Reich, and William Kunstler, while lauding the socio-economic diagnoses of Milton Friedman and Stewart Alsop (Powell, 1971, pp. 4–6). Powell wrote in this regard:

“The most disquieting voices joining the chorus of criticism, come from perfectly respectable elements of society: from the college campus, the pulpit, the media, the intellectual and literary journals, the arts and sciences, and from politicians….these often are the most articulate, the most vocal, the most prolific in their writing and speaking”. (Powell, 1971, pp. 2–3)

Powell called for an aggressive attitude on behalf of American business, prescribed counter-measures to be pursued, and denounced businesspeople apathetic to public criticism, albeit conceding that no business person is trained to retaliate against “propaganda, political demagoguery, or economic illiteracy” (Powell, 1971, p. 7). The author’s gun-related metaphors revealed much about his outlook as he continued by writing: “The foregoing references illustrate the broad, shotgun attack on the [free enterprise] system itself. There are countless examples of rifle shots which undermine confidence and confuse the public” (Powell, 1971, p. 7, emphasis added). With a tone of urgency, Powell claimed:

“The overriding first need is for businessmen to recognize that the ultimate issue may be survival—survival of what we call the free enterprise system, and all that this means for the strength and prosperity of America and the freedom of our people”. (Powell, 1971, p. 10, underlining in the original)

Clearly, when he wrote “our people,” Powell was referring to what he believed was the American public. Yet the intelligentsia, media and politicians against whom he was mobilizing in this memo were the intellectual lifeblood of the American public. They represented competing beliefs and values in the American intellectual and political spheres. The polemic that was the object of Powell’s frustration originated from these discursive spheres, which largely represented the social order of the early 1970s in the US, and which Powell intended to shirk, supersede, and “defeat” rather than engage. This attitude, in combination with his characterization of the American people as duped by propaganda and demagoguery and as economically illiterate, exposed an attitude that is common in colonial and imperialistic ideologies. Specifically, the ideal of divine providence, or a contemporary equivalent of a “manifest destiny,” wherein it would be the corporate world’s responsibility to help the American people improve themselves and it would be the American people’s duty to obey. The following statement from the memo characterizes today’s corporate modus operandi:

“The day is long past when the chief executive officer of a major corporation discharges his responsibility by maintaining a satisfactory growth of profits, with due regard to the corporation’s public and social responsibilities. If our system is to survive, top management must be equally concerned with protecting and preserving the system itself. This involves far more than an increased emphasis on ‘public relations’ or ‘governmental affairs’—two areas in which corporations long have invested substantial sums”. (Powell, 1971, p. 10)

Reneging on any sense of corporate responsibility is a fundamental feature within the neoliberal narrative, where human needs are to be met by the market, and where the importance of human needs are secondary to capital accumulation—and this is also a fundamental contradiction, since capitalists impoverish the workers whose incomes are needed to purchase commodities (Hanieh, 2006, p. 190). The passage above was thus is a call to reverse the power relations between the corporate and social order. Where corporations putatively foster economic growth which is deemed to be beneficial to the social order (for example, by providing tax revenue for the state, increasing employment rates, and increasing the standard of living), Powell’s aim was to politicize American business and for corporations to take action against the public (represented by the intelligentsia, the media, and politicians). Powell provided several strategies to the Chamber of Commerce to the end of implementing this reversal. The strategies in question target specific aspects of public life, and are organized under the headings What Can Be Done about the Campus, What Can Be Done about the Public, The Neglected Political Arena, Neglected Opportunity in the Courts, and Neglected Stockholder Power (Powell, 1971, pp. 15–28). Notably, Powell encourages the Chamber of Commerce to intervene in the staffing of colleges and universities, to monitor and evaluate the “quality” of textbooks and of national television programs, to monitor “news analyses,” and to pay for advertisements aimed at “the overall purpose of [informing] and [enlightening] the American people” (Powell, 1971, p. 24). In light of what Powell’s marshaling of corporate force meant for the American populace, as well as the subservience it envisioned for the state, it is apt to call what is being staged in the Powell memo as a non-violent coup d’état.

According to Bill Moyers, the Powell memo was the inspiration behind the establishment of lobbying groups and think-tanks such as the Heritage Foundation, the Business Roundtable, the Manhattan Institute, Americans for Prosperity, the Cato Institute, and of course, the American Legislative Exchange Council, inaugurated by Paul Weyrich only two years after the memo had been circulating in the corporate world (Moyers, 2011/11/2)…. 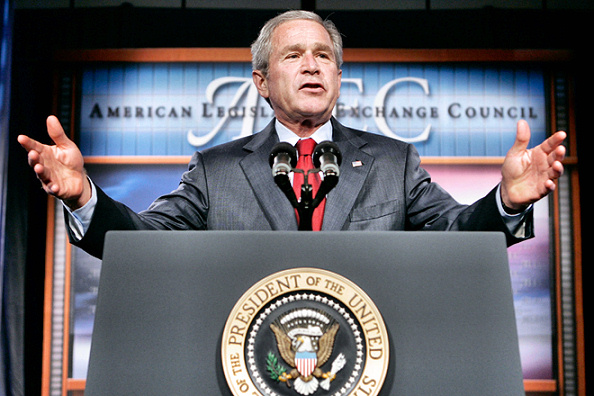 Moyers, B. (2011/11/2). How Wall Street Occupied America: Why the Rich Keep Getting Richer and Our Democracy is Getting Poorer. The Nation.
http://www.thenation.com/article/164349/how-wall-street-occupied-america