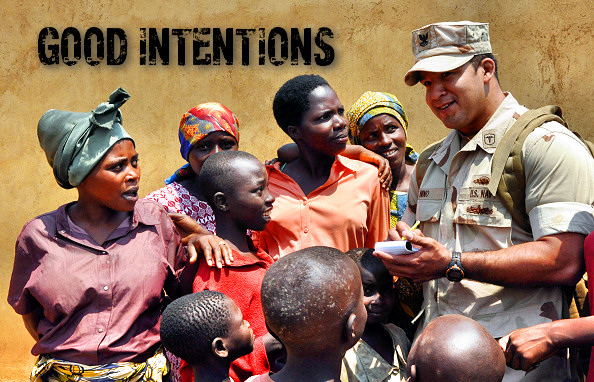 Could it be any more obvious how the Pentagon has learned to mimic certain styles of anthropological photography as shown in the instance above? Resembling any of a vast number of photographs of or by anthropologists, such as famous ones of Bronislaw Malinowski and Margaret Mead “in the field,” this one also features the note-taking foreigner set among local villagers, even if his attention (as is often the case in these posed Pentagon photographs) seems to lie elsewhere. As I argue below, one of the recurring features of Pentagon photography, especially one that accounts for their possible aesthetic appeal (depending on the cultural training of the viewer), is their correspondence with dominant and pervasive photographic genres and subjects, whether it’s the cowboy riding off in the sunset, Santa Claus delivering toys, or the sailor united with his wife. This photograph, depicting a benign, happy, and helpful US military presence, was used as the cover image of Good Intentions (below). The official caption indicated that this is US Navy Hospital Corpsman 2nd Class Porfirio Nino, from Maritime Civil Affairs Team 104, who is practicing speaking Kinyarwanda, one of the official languages of Rwanda, during a civil observation mission in Bunyamanza, Rwanda, August 7, 2009 (DoD photo by Senior Chief Mass Communication Specialist Jon E. McMillan, US Navy). The Pentagon was impressed enough with this photograph that it also appears as the lead image for a 2011 presentation by AFRICOM titled, “United States Africa Command: The First Three Years”. On the image the following words were superimposed: “‘Umuntu Ngumuntu Ngamantu’ I am a person through other people. My humanity is tied to yours.~ Zulu proverb.” It’s a lovely gloss for the grimmer realities of power and dominance that lie underneath.

The following is an extract from my chapter, “A Flickr of Militarization: Photographic Regulation, Symbolic Consecration, and the Strategic Communication of ‘Good Intentions’,” published in Good Intentions: Norms and Practices of Imperial Humanitarianism (Montreal: Alert Press, 2014), pp. 185-279:

Picture-perfect good intentions: healing babies, helping mothers, playing ball with boys, laying bricks, parading, working out, loving dogs. If one were to take at face value the US Department of Defense’s photographic self-representations (which is what the leaders of the institution explicitly prefer), then one could be forgiven for believing that US military training involves learning basic techniques for skipping rope, holding hands, delivering Christmas gifts, and of course polishing and maintaining daunting machinery. The US Department of Defense (DoD), has created a utopian virtual world through the use of “social media” such as Flickr (an interactive image-hosting website owned by Yahoo), portraying the US military as, effectively, the world’s biggest charitable association if not the world’s happiest, but more than that: as a representative of the shared interests and common values that bind diverse peoples to the US. Under the presidency of Barack Obama, the intended effects of communication and “engagement” could be summarized as creating an impression of the US as a force for global good, in the minds of people around the world. These intended effects on foreign audiences involved having them recognize areas of “mutual interest” with the US; believing that the US “plays a constructive role in global affairs”; and, seeing the US as a “respectful partner” in efforts to “meet complex global challenges” (White House, 2009, p. 6). This is one way to keep memories of anti-colonialism at bay (Mooers, 2006, p. 2).

This chapter is based on a study of the complete collection of photographs uploaded to Flickr by the DoD, totaling 9,963 images spanning the years from 2009 to (March) 2014. One should note that the DoD as such is just one institutional front in the US military’s overall social media presence. Each of the US armed services—the Navy, Marine Corps, Air Force and Army—has its own individual Flickr account (in addition to many other social media accounts). The DoD was chosen as the focus here as its image database is meant to be comprehensive of all of the armed services, with some degree of overlap (the same image uploaded to different armed services’ accounts) and yet somewhat more manageable in size than some of the others (and smaller than all of the others combined). The analysis presented herein is not a quantitative one, nor does it offer any assumptions about the nature of the “audience(s)” for these images. Instead, by keeping in mind that photographs are the “products of specific intentionality” (Banks, 2001, p. 7), what is offered is a reading of intent and thematic structure, both from the concatenation of images produced to uphold certain humanitarian and globalist narratives, and from a reading of a plethora of documents outlining the social media and general communication strategies of the foreign policy apparatus of the US government and the US military in particular. Over 40 such documents were studied, and two dozen of those are cited in the chapter. A sample of 57 photographs is also presented in the chapter, and some will be selected for further commentary in upcoming installments on this site.

Keeping in mind the damaging media exposure of the Vietnam war years, military control over the images of war distributed to the public has gone a distant step beyond the practice of “embedding” journalists (as during the second Iraq war), to directly producing its own media materials. However, that control can never be total. As in the case of the Abu Ghraib torture photographs, or the “Collateral Murder” video published by WikiLeaks in 2010 (both of which have been featured and discussed in previous volumes in this series), reality as constructed through pictorial representation always necessitates a strategy on the part of the military. If the realities of US military power asserted around the globe had been as simple and uncontroversial as the DoD Flickr account would like to suggest, then there would be no need for a strategy, and indeed no need for this social media practice. It would all be a matter of unquestionable fact that requires no defence. If anything it seems that the US military’s media strategists are still painfully aware of the impact of Abu Ghraib, to the point of producing the exact opposite. However, in producing the exact opposite in order to shore up the credibility of the institution’s image, it thus strains it, thus inviting further critical scrutiny. Before one might interject that this argument renders Pentagon media practice as flawed regardless of what it does, that would be a mistaken interpretation. This chapter is not so much about what the US military achieves with photography, as much as it is about how it does it, why, what this reveals about the cultural practice of US military media, and what the US military clearly chooses not to do and how that reflects on the actuality of its role in a post-liberal political formation that nonetheless still proclaims its democratic credentials.

Photographs, contra US military strategizing, do not speak for themselves. The patterns to be found among these thousands of images are in fact quite regular (because they were meant to be), and make a series of clear points. These photographs tend to represent the US military as a humanitarian, charitable organization, working among many communities around the world that are populated, for example, by children who are only too happy to be vaccinated and to skip rope with US soldiers. Female US soldiers have smiling close encounters with little girls, or cradle babies. When not displaying the pure, motive-less good intentions of the US military as big brother/baby-sitter for the world, the photographs produce a celebration of the awesome power and sophistication of US military technology: jets flying in formation, shiny drones illuminated at night like alien UFOs, or lines of massive ships at sea like armoured knights heading out on a crusade. Deterrence and “counter-terrorism” are thus built-in, sometimes with a smile.

Yet, there are virtually no images of actual combat, that is, the intended purpose of US military personnel and weaponry. Indeed, the US military ordinarily uses cameras in combat situations producing the kind of “COMCAM” imagery that is useful for determining targets and doing battle damage assessments—but this is not the kind of imagery present in the Pentagon’s Flickr portfolio. The photographs here instead collectively portray a world rendered frictionless by the speed and ubiquity of American power and technology—without showing the battle effects of that power. In addition, by being tenuously emptied of political overtones, the photographs produce a political effect, for political purposes—they do not tell the horror stories of war, of blood shed and lives lost, of destruction and grief, but rather portray something like a birthday party. Indeed, gift giving is a central feature of most of the photographs featuring US military personnel and citizens of other nations.

Rather than being accountable to the public which funds it, the US military instead refuses to tell the truth of war, and the truth of its actions, and this in itself is a lesson about an institution that is presumably under civilian control in a democracy. The military’s devotion to its own “mission” is singular and exclusive. It also reveals a military institution that possesses its own sense of its raison d’être, one bent on determining what will be its public answerability (if any).

The argument presented here is not that the photographs are “fake,” “staged,” or altogether “unreal”. The staging is quite real, but real in many subtle and somewhat abstract ways than are normally considered, and not always staged in a straightforward sense. They are selective, partial, and framed. The dominant cultural prejudice arising from positivist methodology, which treats photographs as objective and neutral documentary records, is thus not being endorsed here. Instead, the understanding here is that as products of a particular culture, photographs are only perceived as real thanks to the cultural conventions in which we have been trained: “they only appear realistic because we have been taught to see them as such” (Wright, 1999, p. 6). The question then becomes one of interpreting the photograph as a structured record, neither an impartial one, nor merely a record of “the Other,” and yet not one whose meanings can be restricted by the authorizations and regulations of the Pentagon. The photograph is instead treated here as, “a document which often reveals as much (if not more) about the individuals and society which produced the image than it does about its subject(s)” (Wright, 1999, p. 4).

The analytical methodology applied here follows the basic outlines found in Wright’s (1999) The Photography Handbook, also in the works of visual anthropologists such as Banks (2001) and Pink (2001), and it borrows some of the conceptual analyses of Bourdieu (1991, 1999) and Ortner (1973). Following Wright’s combination of realism, formalism, and expressionism, we examine the aesthetic intentions of the Pentagon’s photographs by respectively looking through photographs (the subjects that the photographer purports to record), looking at the photographs (the methods and forms of depicting the select contents), and looking behind the photographs to consider what motivated their taking and the viewpoints embedded in the photographic act (Wright, 1999, pp. 38–39). In particular, we consider both the “indexical” and “symbolic” facets of the photographic collection, that is to say, what is traced out by the photographs as documents of something, and what is the intended representation of what is selectively shown (Wright, 1999, pp. 71–72). We analyse both the internal and external narratives of the photographs, that is, both contents and contexts of production (Banks, 2001, pp. 11, 12). Slightly modifying Wombell (as quoted in Wright, 1999, p. 72), the methodology in this chapter holds that “each image is an interpretation of a situation,” and is not just its “objective representation”.