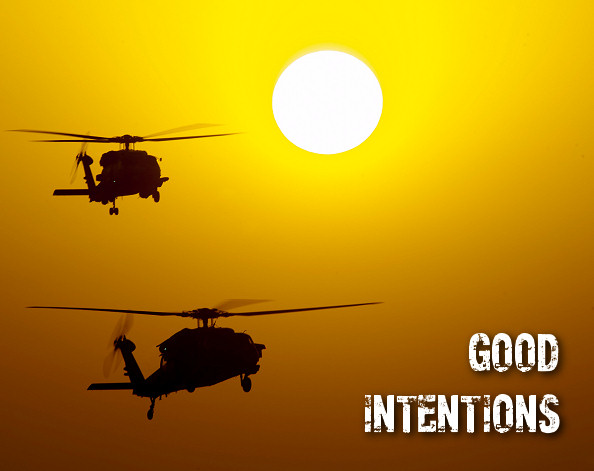 The following is an extract from my chapter, “A Flickr of Militarization: Photographic Regulation, Symbolic Consecration, and the Strategic Communication of ‘Good Intentions’,” published in Good Intentions: Norms and Practices of Imperial Humanitarianism (Montreal: Alert Press, 2014), pp. 185-279:

US military documents make it quite clear that, for the military, a photograph is a straightforward, truthful, and impartial record of reality as it appeared in front of the camera. However, at the same time these documents suggest that some images might be used as “enemy propaganda” whereas other images are safe in that they “support the mission” of the US military. Here I wish to outline what the US military has made available for the public record about its social media strategies, and in particular about its “Flickr strategy”.

Supporting the military’s mission and telling a story are the dual themes of the Pentagon’s visual media strategy. To begin, the Pentagon has a definition for “visual information,” which consists of:

“one or more of the various visual media, with or without sound, to include still photography, motion picture photography, video or audio recording, graphic arts, visual aids, models, display, visual presentation services, and the support processes”. (DoD, 2008, p. 9)

Specific reference to a strategy pertaining to photography and the use of Flickr, comes from the Office of the Chief of Public Affairs Online and Social Media Division (US Army, 2010a). The audience is defined as a global one, in addition to soldiers and their families, and veterans (US Army 2010a, p. 1). While the proclaimed aim of the Flickr account is to provide “a visual story of the U.S. army,” the more specific points in the document suggest a narrower objective. In particular the Chief of Public Affairs states: “the Social Media Team will only post content that supports the Army mission and the Army themes” (US Army, 2010a, p. 2). The Army will not post photographs that, “do not support the mission of the U.S. Army,” or those that, “violate U.S. Army Operational Security (OPSEC) guidelines,” or, “images that could be used as propaganda by enemies of the United States,” or, “images that contain any content that could be construed as racist, derogatory, or otherwise offensive,” or, “images that show military personnel or government/contracted employees acting in an unprofessional manner or engaging in any act that would damage the image or reputation of the Army” (US Army, 2010a, p. 3). The Chief of Public Affairs also states that the way of “measuring success” of these photographs is to count the number of “views” that they receive (US Army, 2010a, p. 3).

The combined effect of these restrictions is therefore not one designed to simply tell a “visual story” of the US Army, but to tell only some stories that have a prescribed political motivation (along with an unspoken faith in the capacity of images to tell such stories). If Army Public Affairs positions itself against “enemy use” of its photos for “propaganda,” it then implies what its objectives are, which also constitute propaganda. Indeed, the notion that it would be “propaganda” to use US Army photographs in a critique of the US Army’s “mission,” is such a broad view of “propaganda” that its aim is to remove any question about the military’s role just as it labours to pry its self-representation away from the realm of propaganda. The US Army thus seems to declare: it’s propaganda when they criticize us, but it’s not propaganda when we tell them our glory stories. The thinking is thus structured in terms of simple political absolutes, and the state of political exception is the rule of representation.

The additional restriction under the umbrella of Operational Security is, as we have seen in the massive over-classification of information that was leaked by Bradley Manning, a particularly oppressive one. The caution about racist images or displays of unprofessional behaviour is only necessary if the US Army is aware of the existence of these facets of US Army life. The final point is about “reputation,” and here we can recall the impact of Abu Ghraib.

What is also remarkable about the “Flickr strategy” above is the implicit understanding that images contain a single, direct message, and that what is photographed, and how it is photographed, will determine whether an image is “successful” in supporting the US Army “mission”. In other words, photographs can only be understood in one manner: the intended manner. Once one counts up the “views,” then one can know how many people have had their perceptions successfully shaped by the US Army. It is a bet, even if not understood as such by the US Army: that members of the viewing public have the same prerequisite cultural training and ideological orientation that allows them to see an image as it was intended to be seen. It is a bet that, as another Army social media guidebook states, “a picture really is worth a thousand words” (US Army, 2010b, p. 21) and that the US Army can predetermine those words. It is necessarily a bet that pictures speak for themselves. It is a bet that images lack plenitude of information that can be read in many different ways. Indeed, it is even a bet that a piece such as this will not be written.

In general, the Pentagon’s approach to photography fits well in descriptions of “scientific-realist” approaches that seek to “regulate the context” in which photographs are produced in order to produce “reliable” visual “evidence” (Pink, 2001, p. 97). The assumption made in this approach is that the photograph itself, the content of the photograph, would be the focus of the viewer’s analysis. However, as the numerous directives and manuals attest, along with their detailed instructions on how to make useful and good pictures, the Pentagon actively regulates context, and that can be made visible in a critical analysis of the photographs.

So assured are they by the power of photography, Pentagon strategists never raise the following questions in any of their manuals and handbooks: if the US military can tell a “visual story,” what is there to stop viewers from recognizing that it is, indeed, just a story, a narrative play, where one can play with any other stories one likes? Moreover, how do they know that the story will be read and understood as intended? The belief that photographs will speak for themselves is never unpacked by the military strategists. On the one hand, what a viewer actually sees and comprehends, even if not consciously, is largely a matter of training: having learned the cultural patterns and conventions for telling/reading visual stories (see Banks, 2001, p. 10). Thus any photograph may have, “no fixed meaning at all and, although physically static, its message becomes subject to the fluctuations of shifting social patterns” (Wright, 1999, p. 6). This suggests a limitation, for photographs do not speak across cultures as easily as the Pentagon’s strategists think. Indeed, even within similar cultural formations disagreements over what is shown and how it is seen run rife. One may be reminded here of the argument between the French literary critic and semiologist, Roland Barthes, and the American-born French photographer, William Klein. Barthes fixated on one child’s “bad teeth” in one of Klein’s photos of children in Little Italy, New York. Klein was indignant and responded:

“He’s more interested in what he sees than in what the photographer sees. I saw other things when I took the picture…but Barthes isn’t all that interested in what I see or what I’ve done. He’s not listening to me—only to himself”. (Wright, 1999, p. 8)

The Pentagon is waiting to discover that it is William Klein.

Contrary to the kind of early positivist appreciations of photographic “records” that also appealed to the new discipline of Anthropology,1 there is nothing objective, realistic, or neutral about photographs. As Marcus Banks explained, if photographs seem to bear a semblance of life and agency within them, it is at least in part because “humans frequently displace…conversations onto inanimate objects” (2001, p. 10). In line with numerous critiques of the supposed impartial realism of photography, Pierre Bourdieu explained:

“photography captures an aspect of reality which is only ever the result of an arbitrary selection, and, consequently, of a transcription; among all the qualities of the object, the only ones retained are the visual qualities which appear for a moment and from one sole viewpoint”. (1999, p. 162)

Extending this argument, Bourdieu adds, “that which is visible is only ever that which is legible” (1999, p. 163). If military photographers think their products tell a true visual story, it’s because what they wanted to see, and how they choose to see, is what shaped their photographic practice to begin with. Their photographs, therefore, are neither “realistic” nor “staged,” but both: they are stagings of realities as understood by military photographers, according to the instructions they have received. As Bourdieu put it more broadly: “it is natural that the imitation of art should appear to be the most natural imitation of nature” (1999, p. 164).

1. Photography was invented at roughly the same time as Euro-American Anthropology began to take a more formal shape, and at the same time as a new phase of western colonial expansion was underway. It is interesting to see a similar set of convergences at work in the Pentagon’s attraction to visual media today, reproducing many of the same flawed and now outmoded assumptions.

US Army. (2010a). Flickr Strategy. Office of the Chief of Public Affairs Online and Social Media Division.
http://www.slideshare.net/USArmySocialMedia/us-army-flickr-strategy

One thought on “Realism or Iconography? The Pentagon’s Implicit Theory of Visual Representation”