Encoding Poverty, Backwardness, and Dependency in US Military Imagery

Bare feet. Ever since I was a small child, I have been made aware of how not wearing shoes was symbolically loaded with ideas of poverty, backwardness, primitiveness, or being low class. Images of barefoot people in newspapers and magazines almost always showed villagers in Africa or the Pacific–or Hippies and West Virginians in the US. Stores in Canada routinely posted signs: “No shoes, no service”. Bare feet were, at least for a long time, quietly yet mightily stigmatized in much of Western culture. Like all things “primitive,” this form of bareness symbolizing underdevelopment and an inferior culture (or lack of culture, and lack of development), could also be romanticized: bare feet in the grass, on the sand, symbolizing freedom and child-like innocence, and thus nostalgia for things of the past. Bare feet could also symbolize the exact opposite of freedom: slavery. In a number of slave colonies, colonial decrees sometimes mandated that slaves go barefoot. Bare feet can also represent “life in different climate zones,” so that photos of people all going around barefooted can represent travel to a different place.

In some places, there seems to have been a rebellion against the negatively-loaded signification of bare feet: when I lived in Australia, I saw that a great many undergraduate students went to campus barefoot (impressive because pavements can become unbelievably hot in summer), while stores might have signs that instead stated, “No shirt, no service”–it was not an uncommon sight to walk down the aisle of a major supermarket and see ostensibly middle-class people with bare feet, with nobody asking them to leave or staring at them. Either way, the bare foot seems to have become loaded with symbolic meaning.

It was therefore interesting to discover a pattern hidden within the many thousands of photographs uploaded to the US Department of Defense’s Flickr “photostream,” that tend to focus on and magnify the bare foot. Even searching their image database, using the terms “feet” and “foot,” produces automatic results, while producing none for some terms that might be more commonly associated with the military. This–and the next couple of short photo essays–comes out of a larger study I began early in 2014, on Pentagon photography, which first appeared in print and online in chapter 9 of Good Intentions. That in turn is part of a broader ongoing study of imperial symbolism.

The proposition that a pattern is not accidental is not such a radical methodological assumption. Pentagon photographs, like most other photographs, are carriers of convention loaded with the culturally sanctioned biases, preferences, and prejudices of the photographer. Furthermore, Pentagon photographers perform under specific instructions as to what to photograph, how, and why. On the other hand, they sometimes seem to exceed the narrow confines of those lists of directives, to produce “stunning images,” which are stunning precisely because they speak to viewers who share the same cultural conventions as the photographer, and who have been schooled in recognizing what is significant in images. What follows is a selection of images that imply something significant about bare feet–as we have been trained to think of bare feet in the West. The original captions have been reproduced beneath each image, with some additional comments of my own. In summary, taken together the photographs appear to remind viewers of the following messages: 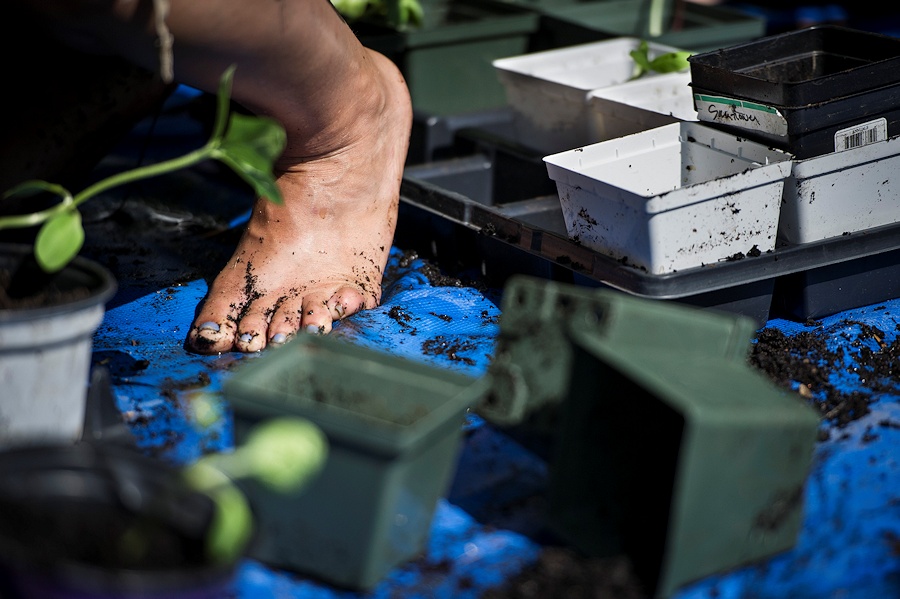 “Brenda and Jane set out on this farming adventure with literally no farming experience. Though, you wouldn’t be able to tell talking to them a short four years into their new home project.”

The original caption is almost meaningless–it comes from a collection of photos from the DoD’s 2014 workshop for military photographers, thus the implication is that this is the foot of one of their photographers, and then it becomes significant: it reminds us of where we “place” our bare feet, here shown embedded in soil, among plants. In a way then, this image serves the function of symbolic anchor, reaffirming the associations that we make in North America where bare feet are concerned: bare feet = peasant. 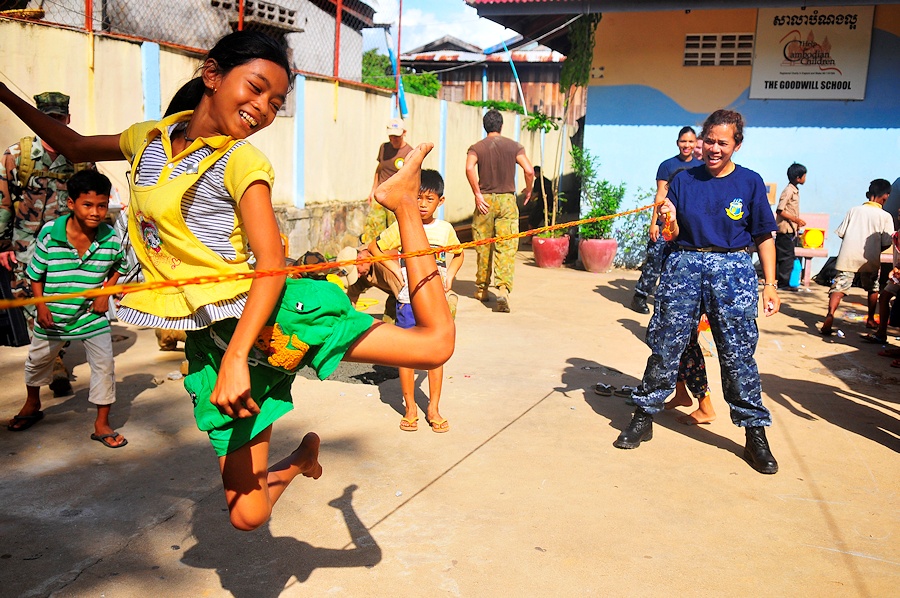 This image is loaded in many more ways than just foot symbolism, especially given that Pentagon photographs tend to focus heavily on women and children in other countries, and when focusing on children they tend to be children cast as orphans, without parents and teachers except for US military personnel. This is more the subject of the following photo essay. Here, note how the girl’s bare foot is almost in the centre of the photograph, making it difficult to miss, and how the girl’s bare feet contrast with those of the female soldier, clad in heavy boots. There is an implied civilizational and developmental contrast, with the younger and less clothed connected to the older and more clothed in a straight evolutionary line perhaps unintentionally symbolized by the rope, as if it were an animated graph of cultural evolution. 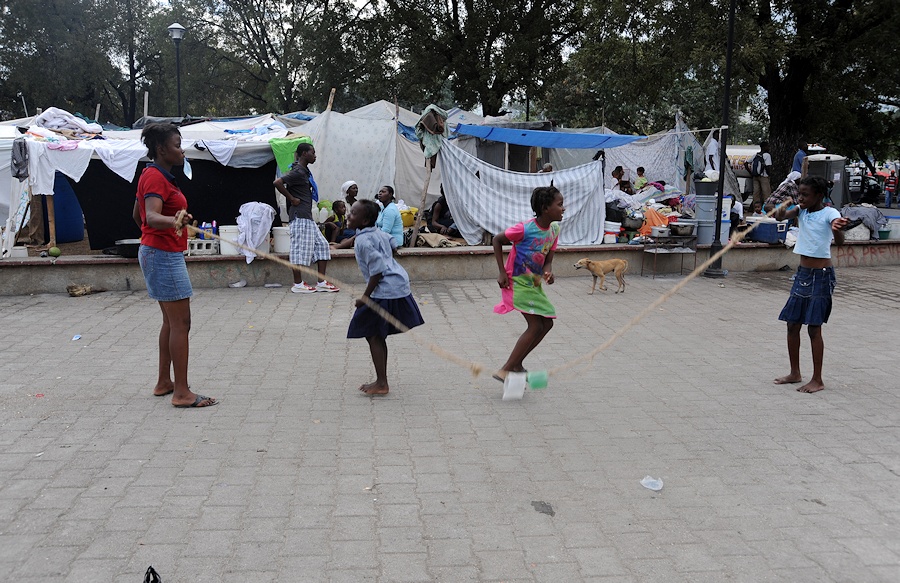 Displaced Haitians girls jump rope in a tent city near the Presidential Palace in Port-au-Prince, Haiti, Jan. 26, 2010. Members of the Department of Defense and the U.S. Agency for International Development are in the area conducting Operation Unified Response to provide aid and relief to Haitian citizens affected by the 7.0-magnitude earthquake that struck the region Jan. 12, 2010. (U.S. Air Force photo by Tech. Sgt. Prentice Colter/Released)

This image indicates that there is a pattern of US military photography focusing on barefooted girls in underdeveloped zones. This is a disaster zone photo in fact, which is unusual in showing US military personnel doing nothing at all in the image (they are altogether absent from the frame). Again, bare feet go with poverty, blackness, females, underdevelopment, and dependency. 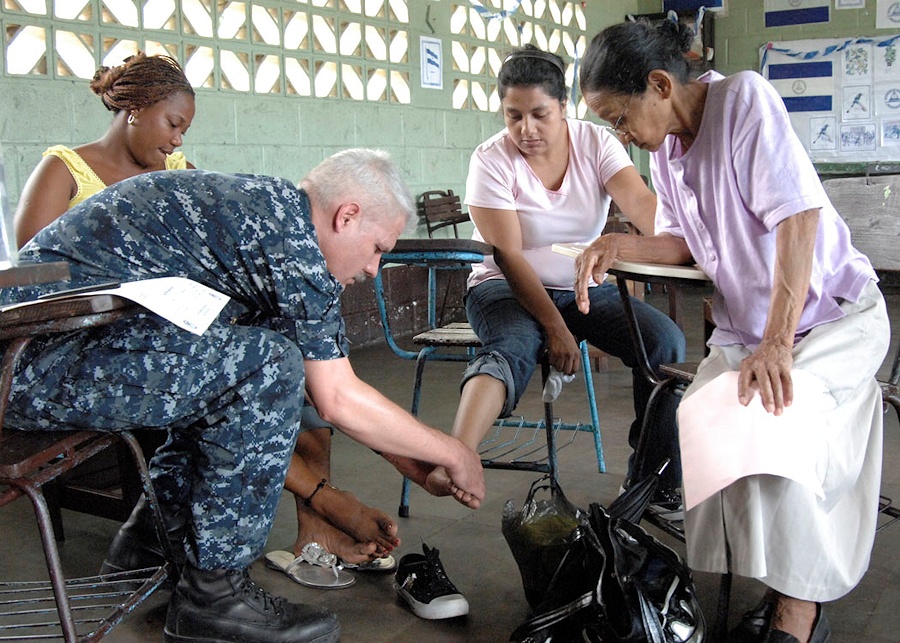 A foot doctor: what better way to combine women, bare feet, and the US military as a source of caring and healing? Again, notice the central positioning of the bare foot in this image. 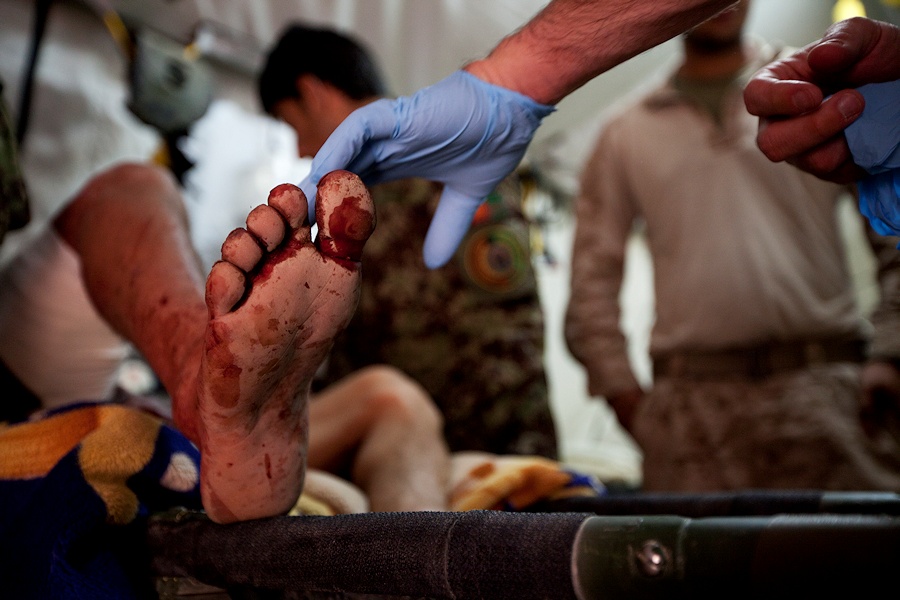 This is an unusual photograph for the Pentagon photostream–not for showing a bare foot, which is obviously a recurring motif–but for providing a graphic display of injury. One almost never sees any blood in their photographs–they are essentially demilitarized military photos that function to create an apolitical political effect. Here we are permitted to see blood, but only because it belongs to an Afghan. Again, the invincible, never bleeding US military is there merely to offer “help”. 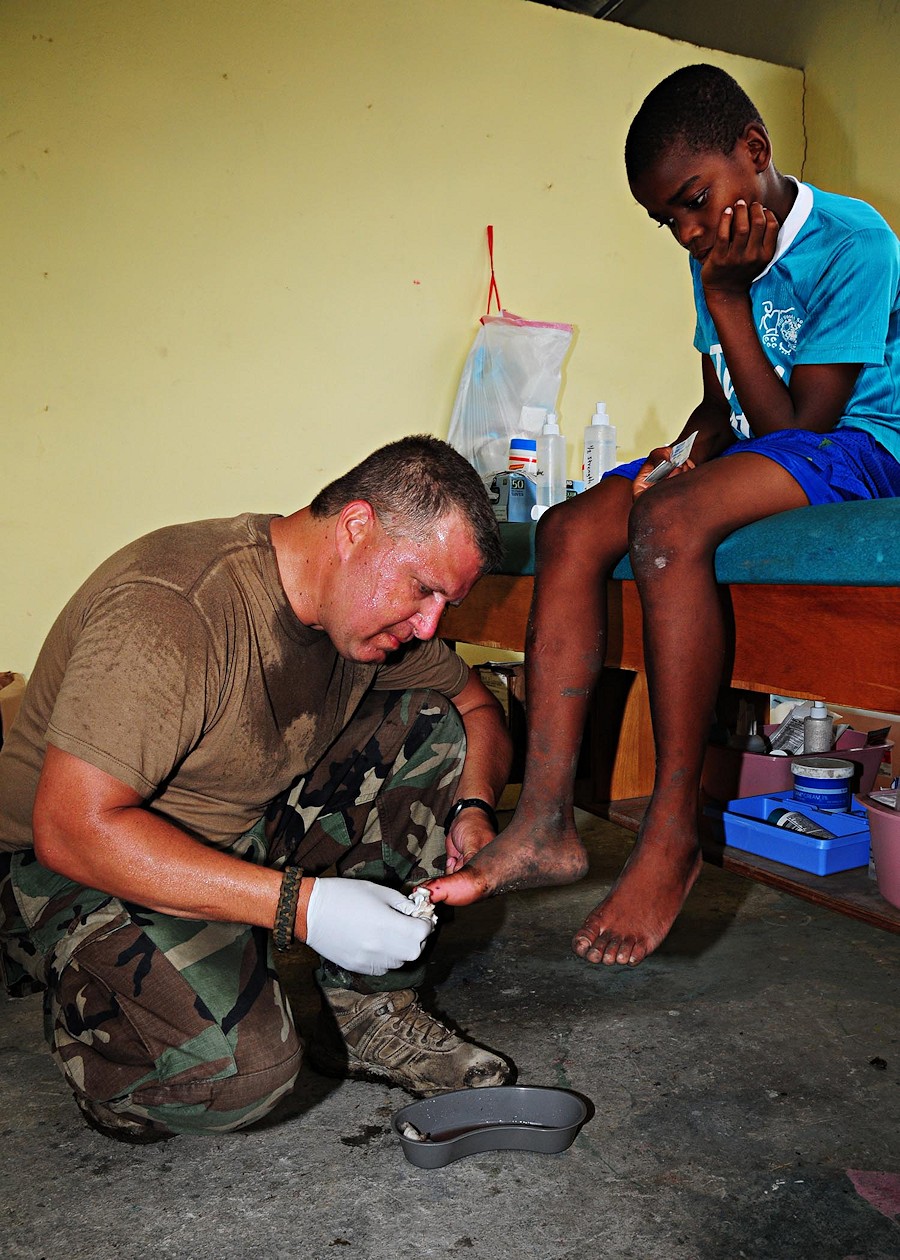 One could make similar points as with image 5, the point being that there is indeed a pattern here. The image also is meant to impress us with the “humanitarian” nature of the US military, of “America the good,” while obviously not addressing a very simple question: do you need the military to attend to other people’s feet? Note here the orphanage tourism that is involved, as the boy is an orphan. It is unusual, however, to see male others in such photographs. 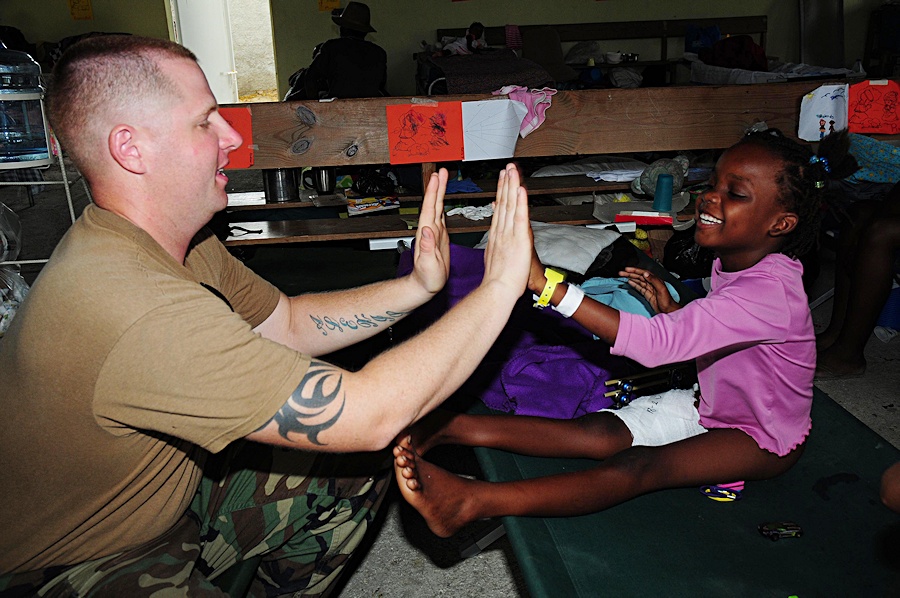 Finally, with the bare foot again in a central position in the photo, and again associated with blackness, femaleness, and infancy, here the photo speaks directly to the next photo essay to come in this series, of the US military fulfilling the role of babysitter to the world. Without the US military, would any of us know what it is to have parents?