Getting Past the Propaganda

We are routinely told that Mexico has grown into the “one of the more robust emerging economies with exports of about $1 billion a day”, more than 10 times what they were in 1994. CBC News, like Trump, thinks Mexico is “the big winner” of NAFTA. If it sounds improbable that a small economy can “beat” two bigger North American economies, it’s because that did not happen unless you are ready to select and bend statistics into some uniquely shaped monstrosities. There is little doubt, however, that NAFTA did benefit the already rich upper class in Mexico, empowering its business class on the international stage, while admitting a small number of new entrants to its lower ranks. There is also no doubt that NAFTA increased poverty, hunger, and outward migration from Mexico.

Mexico, if you listen to Donald Trump, is the greatest villain of the US’ international trade, having exploited NAFTA unfairly and using it to make a heist. Left in the dust are poor Americans, penniless and broken. To shore up this fantasy, Trump at least attends to what is another logical component: the alleged stupidity of past US trade negotiators. For Mexico to win so much, it must have been because of some very stupid Americans. Also, Mexicans are terribly crafty and sly people, as we all know from the old Hollywood Westerns—shifty-eyed, sweaty, prone to sudden outbursts of violence, they border on savagery. While it’s natural to see them trying to pick your pocket, there is something decidedly unnatural about seeing them in factories, managing orders, operating machinery, besides other things such as reading and writing or eating with utensils. But how do they work so much when they should normally be busy sleeping? The natural thing for Mexicans to do is to either live from hand to mouth, roaming and rummaging, or to live by stealing—but production, that is definitely not to be their realm. All Trump has done is to digest and then regurgitate a torrent of American stereotyping that is anti-Mexican. It’s that kind of anti-Mexican slander that serves to rationalize the massive theft of Mexican lands by the US. If he is guilty of anything, Trump is guilty of hyper-representation of American popular culture and prevailing prejudice. To blame Trump for fundamentally American sins is even more dishonest than anything Trump says about Mexico.

Where Donald Trump really made a big mistake with his mythology of Mexico is in setting up a glaring contradiction, one that few of his supporters ever even bother to notice, and it’s this one: if Mexico is doing so well because of NAFTA, then why would so many millions of Mexicans want to cross the border and live in the US, which is doing so poorly because of NAFTA? I thought Mexicans were crafty, smooth operators—but now it turns out they’re just plain stupid. So Trump’s narrative is in obvious trouble. Likewise, if Mexico is doing so well thanks to NAFTA, then why does the country have an exploding drug trade? The only possible explanation takes us back to those sweaty, violent, savages—because in the absence of facts or logic, demonization will have to do. Rather than targeting Mexican migrants for scorn, Trump should have targeted the cause of their migration, which would have at least doubled the size of his argument against NAFTA—but when cultural prejudice calls, few true believers can refuse to answer. In addition, these myths help to cover up a basic reality about NAFTA, one uncomfortable for Trump to consider because it would involve a confrontation with members of his own class.

The reality is that NAFTA has done its most hideous destruction in Mexico. Mexico was doing better for itself before NAFTA, and it will do better without it, but there could be painful dislocation and adjustment in the transition as Mexico has been forced to realign its production toward NAFTA (80% of Mexican exports go to the US alone, and 50% of its foreign investment comes from the US). Some, like the Wharton School, call this quasi-feudal dependency “better integration” between the US and Mexico—as if “integration” were some valuable end in its own right. Better integration means that when the US imposes tariffs, Mexico can suffer greater damage, and for neoliberal economists this somehow constitutes a successful achievement.

We already saw in Part 1 that “the US deficit with Mexico” is mostly exaggerated, and covers up the fact that US imports into Mexico are being counted by the US as exports from Mexico. Of course, any country would run a trade surplus if that is how you add things. The question is, since trade remains voluntary, and NAFTA is allegedly such a “bad deal” for the US, then why does the US do any trade with Mexico? As the same article in Macleans explains: “This question reveals an important fact often missed in political discussions: countries don’t actually trade with each other—firms and individuals do”. The reason that trade occurs between the US and Mexico, “is because it is advantageous for some U.S. firms and individuals to buy Mexican goods and services…. Equally, it is advantageous for some U.S. firms and individuals to sell to Mexicans”. The reality is that NAFTA was designed to serve the corporations that lobbied for it, not the nations used to facilitate the wishes and whims of those corporations.

Mexico’s ostensibly enormous foreign sales have not translated into growth in the Mexican economy. As we saw in the graph in Part 1 (and another version below), the average annual rate of per capita growth of its GDP under NAFTA has been less than 1% (CCPA, p. 8). In the decades before NAFTA, the Mexican economy experienced periods of rapid economic growth. After NAFTA, it has had some of the weakest economic growth in Latin America.

Mexico’s poverty rate has barely changed, and its agricultural industry has suffered significantly. Robert Blecker, an economist at American University, pointed out that “contrary to the promises of the leaders who promoted it, NAFTA did not make Mexico converge to the United States in per capita income, nor did it solve Mexico’s employment problems or stem the flow of migration.” On the 10-year anniversary of NAFTA, the Washington Post reported, “19 million more Mexicans are living in poverty than 20 years ago, according to the Mexican government and international organizations. About 24 million–nearly one in every four Mexicans–are classified as extremely poor and unable to afford adequate food.” Today, “over half of the Mexican population, and over 60 percent of the rural population, still fall below the poverty line, despite the promises made by NAFTA’s proponents” (Public Citizen, p. 21). The cost of consumer goods has skyrocketed in Mexico, while real wages have collapsed (Public Citizen, pp. 21–22).

Driven by increased poverty, annual “illegal immigration” from Mexico to the US jumped 54% in the few years after NAFTA was ratified, from 260,000 in 1994 to 400,000 a year from 1995 to 2000. A large part of the reason for that surge in Mexican migrants desperate for work where they could find it (mostly not in Mexico, where employment in manufacturing maquiladoras has declined), is that NAFTA ushered in the destruction of Mexican agricultural industries. 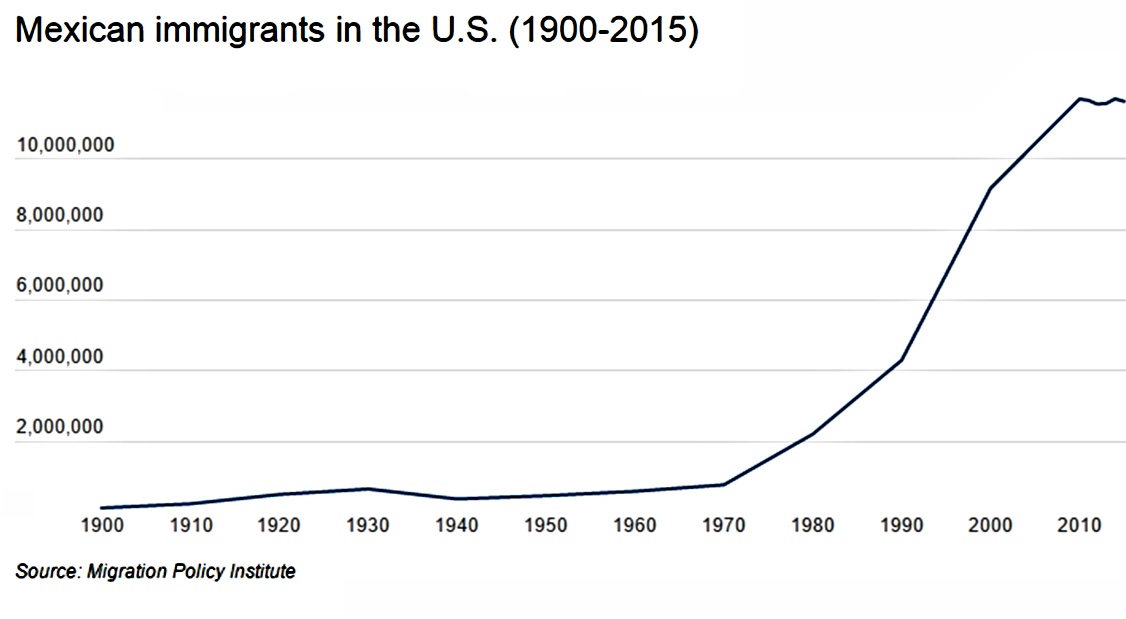 One of the original ways NAFTA was sold in the US was that it would substantially improve development in Mexico and thus decrease the pressure to migrate to the US. Sales pitches frequently asserted that Mexico would become an exporter of goods, not people. Clearly, reality turned out differently. The CCPA reported that “between 1991 and 2000, the number of persons declared ‘illegal aliens’ and deported from the US grew by 51% to 1,814,729, with 95% of these deportees being from Mexico”. Between 1998 and 2001, legal Mexican immigration to the US also increased by 40% (CCPA, p. 7).

“Imports of corn and oilseeds have increased from 8.8 million metric tons a year in 1993 to 20.3 million metric tons in 2002….These imports have replaced national products, increasing rural unemployment. Statistics indicate that Mexico is losing its food sovereignty and instead has increased its dependency on imports, which has generated a major outflow of foreign currency. The supposed advantages for consumers based on greater access to less expensive, imported food products turned out to be pure rhetoric. From 1994 to 2002, the prices [of] goods in the basic food basket increased 257 percent, while prices paid to agricultural producers rose only 185 percent”. (CCPA, p. 10)

While at first cheaper than Mexican corn products, as American foodstuffs flooded Mexico’s liberalized markets and US agribusiness giants moved in,

“1.1 million small farmers—and 1.4 million other Mexicans dependent upon the farm sector—were driven out of work between 1993 and 2005. Wages dropped so precipitously that today the income of a farm laborer is one-third that of what it was before NAFTA. As jobs disappeared and wages sank, many of these rural Mexicans emigrated, swelling the ranks of the 12 million illegal immigrants living incognito and competing for low-wage jobs in the United States”. (Judis, 2008)

After NAFTA, “the price of corn food, especially the Mexican staple, the tortilla, did not decrease; in fact, it has increased 279%” (Henriques & Patel, 2004).

With NAFTA, Mexican Capital Outflows Sustain the US Economy

Where Mexico has succeeded spectacularly is in making US-owned firms much richer, and in sustaining employment across the US. For example, At least 46 US states reported strong and consistent increases in exports to Mexico, almost all of them uniformly showing an increase of between 8% and 14%, as featured in numerous graphs in a report by Christopher Wilson, of the Mexico Institute at the Woodrow Wilson International Center for Scholars. As he pointed out, “Mexico is the top export destination for five states…and is the second most important market for another seventeen states across the country,” sustaining a total of six million jobs in the US (Wilson, p. 2).

Mexico’s supposed trade surplus with the US has been due to maquiladora and petroleum production, both of which precede NAFTA and are not NAFTA-driven. Much of the trade “surplus” takes the form of intra-firm trade among US companies: “three of the largest five export companies in Mexico are U.S. automotive plants that assemble cars in Mexico in order to sell them globally, with many going to the U.S. The same is true with computer assembly plants. Mexico exports many other industrial products to the U.S., but the manufacturing sector as a whole is running a trade deficit” (CCPA, p. 8). Five of the six biggest export firms are 100% foreign owned and account for more than 20% of total exports—as the CCPA summed up, “Mexico exports a lot, but what it exports is not very Mexican, and the increase in exports spurred by NAFTA has not been an engine of economic growth, nor has it generated the promised additional jobs” (CCPA, p. 9). Why? Because corporations are not required to contribute to the host-country’s development.

NAFTA’s purpose was designed by and for corporations, and in this regard each of one of the member nations has lost because of NAFTA.