The April 30, 2019, coup attempt in Venezuela has come and gone. The coup has failed. “Failed state” theory just got a lot more complicated. No longer can the “failed state” designation apply only to those states targeted for recolonization after a prolonged period of destabilization and foreign intervention. Now “failed state” theory has to apply to a degenerate imperial state at its wit’s end, and to the failure of its proxies on the ground, as well as the failure of its invented political fictions to materialize. Even worse than any “failed state,” is the failure of aspirants to power who pretend to have power—namely, the incompetent Venezuelan opposition activist, Juán Guaidó. It’s time that even the few critical media outlets left stop dignifying Guaidó, opposition activist, with the title of self-declared “interim president,” because even that is too grandiose.

This bundle of fictions has not even been wielded by people who have the good sense to know when it’s time to shut up. No, instead the authors of these inventions spin even more, as if wanting to be spotted in all their foolishness. So we had the US government almost triumphantly declaring that it was withdrawing US diplomats from Venezuela—when Venezuela’s government was the one that ordered them out. Then we had US officials rejoice that Venezuela’s representatives had been expelled from the Organization of American States—when Venezuela already declared it was withdrawing from the OAS two years ago, and this month marked the final step in the process. Then we had the US State Department pretend that it could hand the Venezuelan Embassy in Washington, DC, over to representatives of an interim president of an interim that had not even started, or that already ended. One has to really have faith in the stupidity of audiences, and be unflinching about treating everyone as idiots, to mount such an absurd production in public. It also means that they literally have no shame. 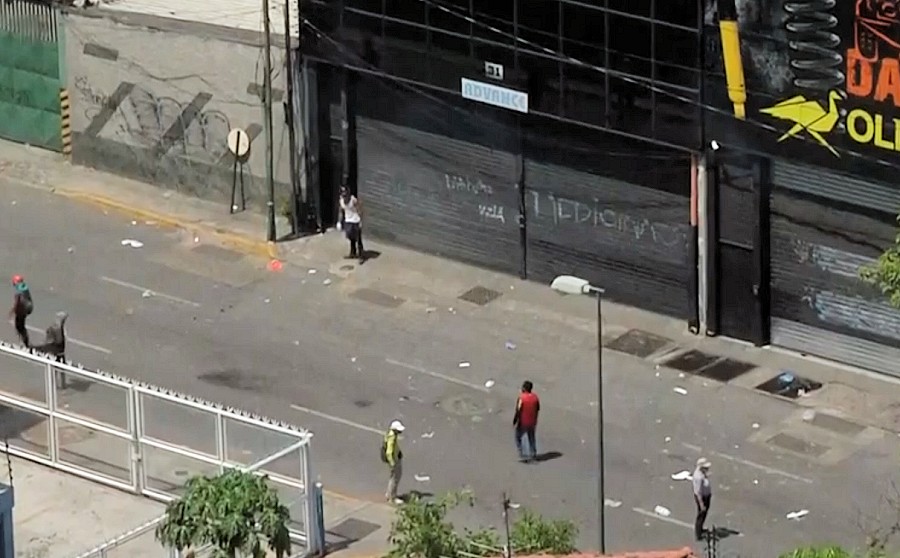 Impressive “uprising” you have there.

As a bad work of fiction, Guaidó could not mount even a lame imitation of a military-backed coup on April 30, which is just the latest in a long line of his failures this year. This character, unknown to 80% of Venezuelans a few months ago, leader of a minority party in a defunct parliament, who never campaigned for the presidency and was never elected to it—this same character posed in front of cameras and claimed military backing which he never had. So he calls on the resources of a hostile foreign power in the vain hope it would make his fiction a reality, clearly showing he understands nothing at all. Even worse: it shows a total lack of any care for all those who would suffer and die in war—Guaidó is ready to sacrifice them all. It’s an ill bird that fouls its own nest.

The response to Guaidó’s call? A few hundred violent protesters showed up, traded rocks with the Bolivarian National Guard, and then stood around talking to each other for hours on end. John Bolton, pushing US intervention in the name of keeping Venezuela free of external dominance (he knows no irony), even tried to nudge Venezuelans in a pitiful attempt at bribery, promising US economic relief if Guaidó took power. As far as attempted coups go, this was fortunately among the most pathetic, lame farces. There is now no resemblance between Venezuela 2019 and Libya 2011, where in the latter case opponents actually seized towns and cities and mounted protests that lasted days on end. What remains the same in the two cases is the determination of the US to implement through violent proxies a fiction of rule.

One also has to wonder how John Bolton, Mike Pompeo, and Elliot Abrams still have jobs today. Trump is not a tower of managerial business acumen after all—if one ever believed the fiction constituting his performance on The Apprentice. Bolton, who was most prominent during the April 30 coup farce, could not even keep himself from tripping over his own excremental attempt at a “narrative”. First, John Bolton called on the Venezuelan military to side with Guaidó—but then invalidated his call, turning around and asserting that, in any case, Venezuela was under (imaginary) Cuban occupation, and it was Cuban troops who were really in charge. So everything fell apart…because of Cuba, and thus Trump threatened Cuba with an embargo, which it has already been under for six decades. Cuba was the fiction used to mask another fiction—the only thing that was real here was how utterly ridiculous US empire has become. 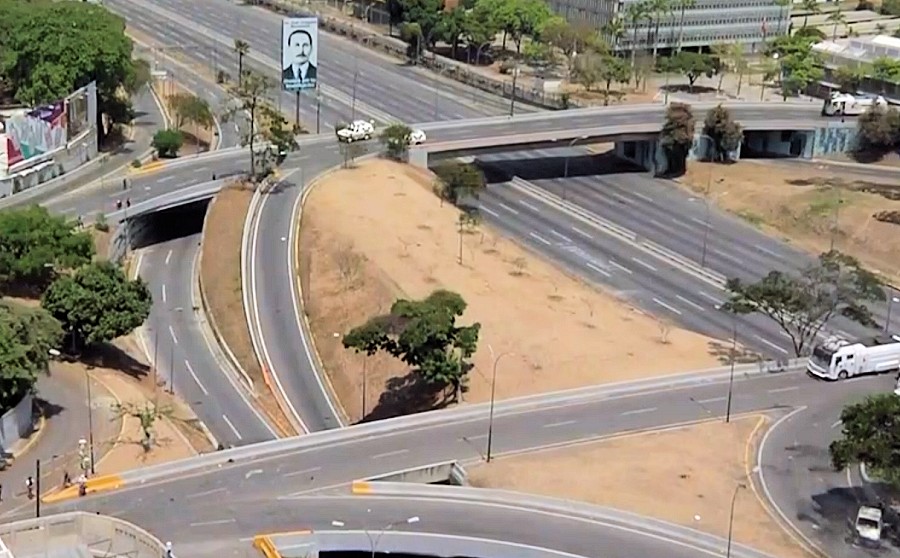 All the action, caught live on camera.

On the night of April 30, as I often do I listened to live radio from Caracas, where the assembled panellists spent a good amount of time engaged in the healthiest, most robust guffawing I have heard in ages. The subject of their laughter? Erik Prince, the war criminal who headed BlackWater and is now begging Trump for cash in return for a “plan”—a plan to send a grand total of 5,000 mercenaries to Venezuela. On RNV radio they wondered if the Americans had really become so stupid and psychotic to think that 5,000 clowns could take and hold so much as a bakery in a country which has 2,000,000 armed citizens in militias alone, not counting the hundreds of thousands in the armed forces and the paramilitary police. Apparently Prince mixed up Venezuela with Grenada—and even in Grenada it took US Marines a week to subdue armed opposition from a comparatively tiny group of diehard patriots.

Nothing is working for the US, not even what might be the most extreme sanctions ever imposed, and weeks of power outages. Certainly, none of the “humanitarian” theatre worked, whether it was the forced “aid” stunt, or the myth that Venezuelan troops set their fake aid on fire. The US was forced to imagine and fantasize about Maduro fleeing the country: witness Mike Pompeo’s bout of deranged lying about Maduro getting on a plane to Cuba, until Russia stopped him. Fictions, lies, propaganda, disinformation, fake news. To top it all off, the news came: this was not even a coup, you see. The real problem here, with such a monumental loss of face, in such a magnificent failure as April 30, is that the US will turn to even more desperate and thus more dangerous measures. However, that comes at a real cost: if the US invades, Trump has to go into an electoral contest with a new war on his back, and it’s not like such a war would come even close to a “cake walk”.

One has to wonder: will those national leaders who—without the authorization of their citizens—unilaterally “recognized” Guaidó as this so-called “interim president” thing, now take stock finally? Or will they cling to this science-fiction that there is a popular movement opposing Nicolás Maduro’s legitimate and very real government?

Clearly, very clearly as it was televised live worldwide all day on April 30 for all to see, Guaidó does not lead a popular movement. He has no authority, no legitimacy, and only a paltry amount of futile support. This so-called “uprising” was an embarrassing failure for his own image as a supposed leader. Then he takes shelter and says “tomorrow, more protests”—yes, junior, that will do the trick. Remember, sport, more always works, and besides, “there’s always tomorrow”. Keep at it, son.

Meanwhile, members of the Lima Group such as Canada, and those members of the European Union that have called for a “peaceful transition” in Venezuela, there is a lot for which they must answer. What “democracy” do they think it is where someone, not elected by the people, marshals the forces of violence in an effort to impose a government on a country? If this were to be done in their countries, would they accept it as democracy? This is the other outrageous fiction that we face: that we in North America live in democratic polities. Democracy should recognize itself in democracy—but when you instead recognize your partner in a violent clutch of putschists, then what are you?

7 thoughts on “A Desperate Empire Crashes in Venezuela”