Strategically timed to appear immediately after a heady week of international climate emergency marches, including large ones in Canada, and after the same week in which Greta Thunberg delivered her UN speech, Bell Canada sent out the message below on Monday, Sept. 30, 2019. This is only one very small, rather ordinary and everyday type of example of how fears about climate change are being exploited to enhance the revenues of corporations. Another example comes from my university, which terminated garbage collection from offices, replacing each office trash bin with a parody of a bin—so small that it is barely larger than a coffee mug. Since we were to empty the micro-bins ourselves, I accidentally threw mine out along with its contents. Some inspired genius came to the conclusion that, with a smaller container, we would produce less garbage. Perhaps we should test this theory by reducing the size of administrators’ offices.

When environmentalism unfolds within a system of heightened inequality and inadequate democratization, it does so unequally and autocratically. The result is not a “saved” climate, but rather enhanced revenue streams for corporations.

The message below is an artifact of contemporary corporate environmentalism. It is an everyday form of Green Neoliberalism. Regarding the message below, it is possible that many if not most Bell customers would have let this pass without uttering a single note of protest, or even asking a simple question out of concern for fairness—fairness to themselves. 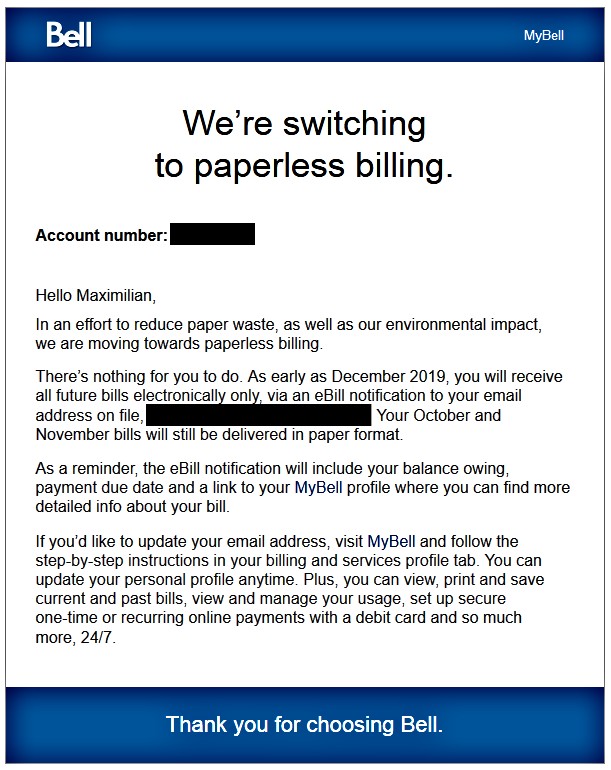 “In an effort to reduce paper waste, as well as our environmental impact, we are moving towards paperless billing”.

First Bell specifies that this move is motivated by a concern for “paper waste”. What paper waste exactly? Recycling is widespread and obligatory in Canada, and we pay taxes for the service. Companies boast of the recycled paper content in their products. If paper is still being “wasted,” then there is a problem with the recycling program—therefore, either fix the problem, or cancel the program and then reduce taxes. Then Bell mentions an amorphous “environmental impact”. Apparently there is no longer any need for even an attempt at elaboration: “environmental impact” all by itself is sufficient enough as a sign to trigger action, namely compliance. There is thus no need to pause and reflect on the fact that any human interacting with the environment will automatically have an “environmental impact,” and that likewise the environment will have a “human impact”. Does it need to be said that environmental impacts must be generated by anything living within an environment? Thus “environmental impact” conveys exactly nothing; it is instead meant to serve as an emotional trigger that leads one to suspend judgment.

Nowhere did the message mention costs, namely savings in costs to Bell. With paperless billing, the entire process of printing, folding, mailing, and delivering bills is brought to a close. Entire shifts of people in mail processing centres, plus the structure associated with obtaining paper, and of course at least some jobs in the pulp and paper industry would thus also be brought to a close.

As mentioned, the timing could not have been more opportune. Canadians have been softened to the need for “hard decisions” to avert impending “climate disaster,” and this would hardly count as a hard decision—instead it is just a minor gesture (supposedly). Not receiving printed bills is not much of a sacrifice at all. Furthermore, the move is one that is in step with the “best practices” of countless other corporations that have switched to paperless billing (just do a web search for “paperless billing” to get a sense of the popularity of the move in the private sector).

No doubt some will rush to the defence of Bell Canada, using a predictable assortment of worn ideological tools. Libertarians will say that a business has a right to do whatever it pleases, and it is up to consumers to make other choices. Leftists driven by “climate emergency” mania will likely assault anyone who dares to continue the paper-based economy, and thus they will end up serving as apologists for corporate profit. Liberals will argue that there is nothing wrong with a corporation making money while “saving the planet” at the same time, and probably congratulate Bell on the wise move, possibly applauding it as “next generation thinking”. Critics will instead be tarnished as backward, as a threat, as reactionary rubes who need to be schooled by a mix of censorship and vulgar insults. Each one of these will have therefore missed the point altogether.

Not worried about appearing insufficiently supportive of environmental concerns, I immediately contacted Bell Canada. For those who do not know, Bell Canada periodically announces arbitrary rate increases for its services, because of unspecified “increased costs” of delivering service, in a country whose telecommunications consumers are already among those paying the most in the world for their services. So if Bell now found a way to instead reduce costs, then surely it should pass the savings on to consumers? Is the notion so utterly barbaric that it defies all logic?

Therefore I contacted Bell with that very question: would I now be receiving a refund or would there instead be a reduction in my monthly bill? I pointed out that I was asking this since a service that I had paid for, was now going to be cut. It is a reasonable question—and indeed, they anticipated it. After pausing to speak with a manager, the answer was: “We are opting you out of paperless billing. From now on, every month you will receive both a paper bill and an email notification”.

That is a peculiar answer, when the stated concern was about saving the environment. What was being tested here was Bell’s explicitly stated commitment to the environment, and Bell clearly failed the test. What the answer reveals is that revenues are not just the first and foremost concern, they are exclusively the only concern. Rather than have to deal with a loss of revenue, which would then need to be explained to shareholders and to creditors, Bell would prefer to maintain the paper service. Rather than garner popular enthusiasm for “Greening the economy,” by having everyone enjoy the reduced costs involved with paperless billing, Bell instead insisted on at least maintaining its current revenue flows.

To be clear, having “everyone” enjoy the reduced costs of customer transactions with companies, can be misleading. The costs are by no means reduced for everyone, as a result of the move to paperless services. Jobs lost from lost business activity surrounding paper, printing, and mailing—everything from lumber to sales to the postal service involved in the chain—would not represent either a savings or a gain. For reduced costs to have the proper impact, they would have to be shared out in the form of compensation to those working in affected industries, on a virtually permanent basis. That is not Bell’s concern however: its concern is with increasing profit by reducing services. If they could find a way of marketing an Internetless Internet connection, and making you pay for withholding Internet access, they would surely do so.

At a minimum, every single Bell Canada customer should call in and demand either a reduction in costs, or maintenance of the paper-based service—whether they support the concept of paperless billing or not is beside the point. It also happens to be beside the point for Bell.

One thought on “Climate Propaganda for Corporate Profit: Bell Canada”